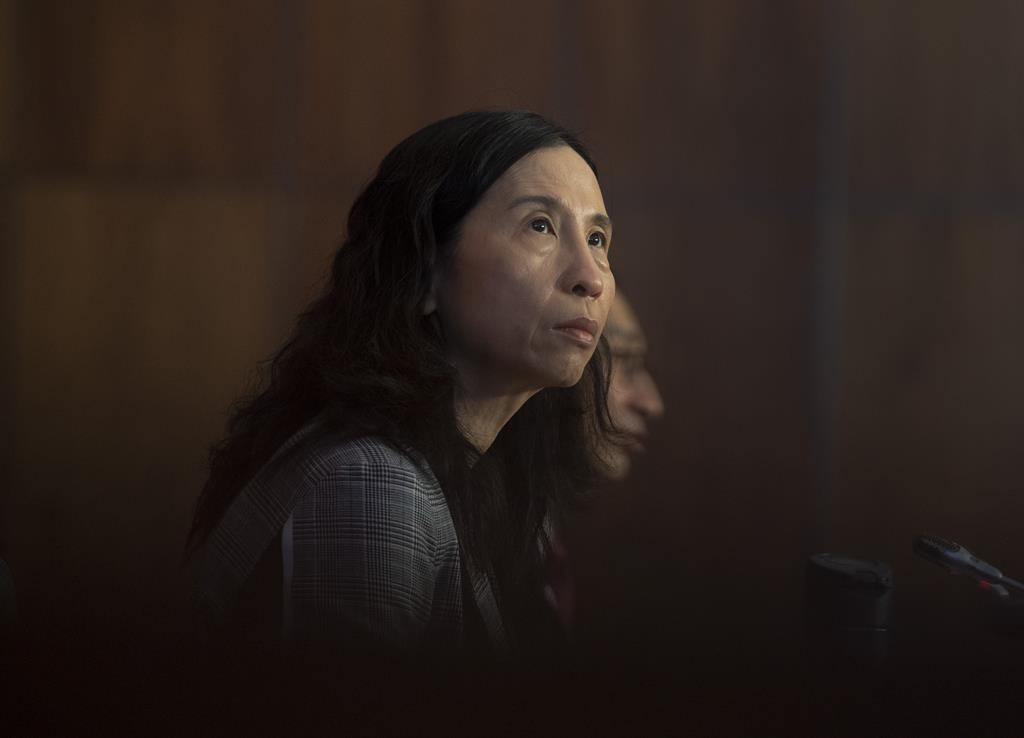 Chief Public Health Officer Theresa Tam looks at a giant screen showing data during a technical briefing on the COVID pandemic in Canada on Friday, January 15, 2021 in Ottawa. File photo by The Canadian Press/Adrian Wyld
Previous story
Next story

Canada's chief public health officer says results from COVID-19 vaccinations are so encouraging that she thinks the need for massive lockdowns could be over before the end of the summer.

"It will it even (be) before September, I think, depending on a number of factors, such as vaccine uptake, ongoing monitoring of other variants, and how vaccine coverage is provided," Dr. Theresa Tam said Tuesday at a news conference in Ottawa.

She said personal protective choices like masks and limited in-person contacts could be with us longer. That will depend on how well vaccines prevent not just serious illness and death, but also the spread of the novel coronavirus. Data on transmission is still being analyzed, said Tam.

British Prime Minister Boris Johnson laid out a plan for restoring life in the United Kingdom Tuesday that predicted the worst of its lockdowns could be over by June 21. The U.K. is far ahead of Canada on vaccinations, aiming to have every adult receive their first dose by the end of July.

As of Tuesday, 1.1 million Canadians have received at least one dose of the vaccine. To hit the first goal in March, an average of about 52,000 people must get their shots each day.

That is well above the average daily injections done so far, but vaccine deliveries are much bigger than they were, with more than one million doses delivered since Feb. 15.

On Monday, provincial and territorial governments delivered a one-day high of nearly 62,000 injections.

Procurement Minister Anita Anand said there are 3.5 million doses being shipped in March, which is enough to vaccinate more than 112,000 people every day.

Canada's vaccine program slowed between Jan. 18 and Feb. 14 when production issues limited shipments to fewer than 350,000 doses. But most provinces have now completed vaccinations in long-term care, or are close to doing so, and many are expanding to seniors living independently.

There have been very positive data from Canada, Israel and the U.K. in the last week showing the effect that even a single dose of COVID-19 vaccine is having to reduce deaths and serious illness among seniors and health-care workers.

Tam wouldn't give a specific date for when lockdowns will no longer be needed, but this is the closest Canadian officials have ever come to putting any kind timeline on when wide-scale restrictions will actually end. Tam however warned that the SARS-CoV-2 virus that causes COVID-19 is tricky and prone to sudden turns.

"I'm sure we haven't seen the last of what it might deal us in terms of surprises," she said.

Those surprises include the variants of the virus that are believed to be more contagious, and might not be as susceptible to all the vaccines approved.

COVID-19 cases continue to decrease countrywide, with an average of 2,908 new cases confirmed daily over the last week, down five per cent compared to a week earlier. The daily death toll fell almost 30 per cent to 54 deaths per day, while hospitalizations averaged 2,400 per day, down 11 per cent from a week earlier.

However, the number of cases tied to variants of concern is creeping upwards. In the last week, there were 220 new cases of the B.1.1.7 variant, first identified in the U.K. In total, 780 B.1.1.7 variants have been confirmed. There have also been 39 cases of B. 1.351, first identified in South Africa, and one of P. 1, which first emerged in Brazil.

Saskatchewan reported its first variant cases not linked to travel Tuesday, in three cases all from late January. It took several weeks to confirm them.

But Canada has stepped up its screening efforts against COVID-19 variants in recent weeks, said Tam. She said several provinces including Ontario, Nova Scotia, British Columbia and Alberta are now screening every positive case for the main virus mutation found in the three variants of concern. Any cases that screen positive are then fully sequenced to confirm the result.

Tam said Canada is also aiming to sequence 10 per cent of all cases, with more than 5,000 sequences done so far in February. The full sequences can confirm the presence of known variants but also identify any new ones.

Anand said Canada's vaccination goals could be moved up if Health Canada approves any of the three vaccines being reviewed at the moment.

Anand said Tuesday Canada is getting 20 million doses of AstraZeneca's vaccine from a U.S. facility between April and September, but is negotiating with the Serum Institute of India to get new doses of that vaccine from there too.

Health Canada has been in the final stages of its review of AstraZeneca's vaccine for several weeks now.

The U.S. Food and Drug Administration is set to decide about the Johnson and Johnson vaccine later this week, and Health Canada could be not far behind. Anand said Canada is to receive 10 million doses of that vaccine between April and September but delivery dates won't be confirmed until it is approved.

Johnson and Johnson is the only single-dose vaccine expected in Canada for now.