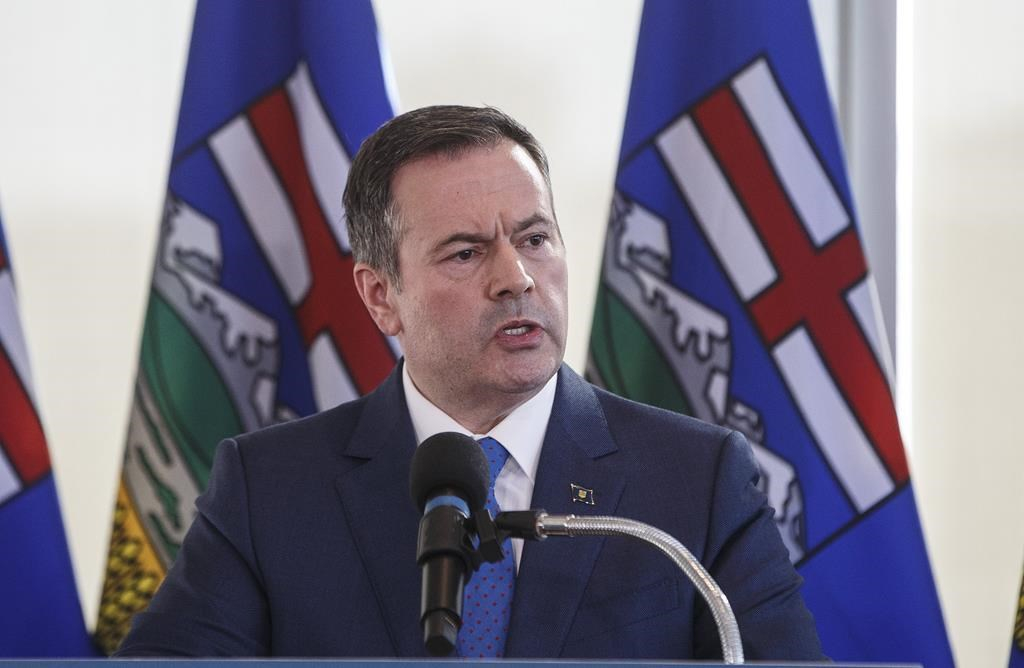 Alberta’s COVID-19-era budget made a hard landing Thursday with an $18.2-billion deficit but also a promise that good times will return.

Finance Minister Travis Toews said a continued vaccine rollout and more businesses opening up should put Alberta on track to start its rebound in the back half of this year.

“Alberta’s economy is now expected to reach pre-COVID levels by 2022, one year earlier than expected,” Toews told a news conference prior to introducing the 2021-22 budget in the legislature.

“(But) Albertans continue to face one of the most difficult times in our history. We’re ensuring that we’re resourcing our health-care response adequately to meet the pandemic challenge (and) we’re positioning the economy for growth and a rebound.”

The medium-term outlook is for more red ink. Alberta is on track to carry $98 billion in tax-supported debt this year, rising to more than $132 billion by 2024. The province's debt a decade ago was $5.1 billion.

Annual spending on debt interest is closing in on $3 billion.

The budget delivered on promises to avoid tax increases in a province that has the lowest per-capita tax regime in Canada — and is the only one with no retail sales tax.

The fiscal plan calls for $57 billion in spending, along with a minimum $1.1 billion to fight COVID-19 and another $1.8 billion in pandemic spending if needed. That's on top of $5.8 billion in COVID-19 spending last year.

“It’s a little bit of a deer in the headlights budget. It’s like they didn’t know what to do.”

The NDP leader said much of Kenney’s “so-called economic recovery plan” has no overarching strategy and consists of reannouncements of old policies or money from the federal government.

“(The plan) amounts to a couple hundred million dollars at best. This, out of a budget that includes almost $40 billion in expenses."

Notley suggested the budget continues to undermine services across the board — either through direct reductions or by failing to fund for population growth and inflation.

“Albertans will pay for Jason Kenney’s mistakes in many, many ways but ultimately the greatest cost is going to be that of lost opportunity."

Non-renewable resource revenues, the traditional foundation of Alberta’s economy, are expected to bring in $2.9 billion, about half of what they were before the pandemic.

Oil prices have rebounded in recent weeks to above US$60 a barrel for the benchmark West Texas Intermediate, but Toews said the province can’t count on or budget for renewed boom times.

“We’re focused on what we can manage … and we’re looking to ensure that we’re delivering government services most efficiently.”

Toews said the United Conservative government remains committed to reducing public-sector, per-capita spending to match that in comparable provinces such as British Columbia and Ontario.

Indicators suggest the overall fiscal future, while not rosy, is brighter. Real gross domestic product, or GDP, is expected to rise 4.8 per cent this year after a 7.8 per cent decline in 2020.

Alberta’s unemployment rate, estimated at 11.4 per cent last year, is expected to slowly decline to 7.3 per cent by 2023, close to its pre-pandemic level.

University of Calgary economist Trevor Tombe said the budget continues “kicking the can down the road” in terms of hard decisions to find revenue to get the books back into balance.

He said even with the reduced spending as planned by 2022, the government will need to find billions of dollars of new money.

But he noted the budget’s most optimistic scenario -- West Texas Intermediate oil averaging US $64.50 a barrel by 2023 -- could reduce the deficit to as little as $3.4 billion and give the government a chance to balance the books while avoiding dreaded tax hikes in an election year.

“They’ve got to be hoping that oil prices rise and spare them those tough decisions,” said Tombe.

“This is in the grand tradition of Alberta governments for decades.”

Alberta's pending budget may get a boost from higher oil prices: Kenney