Can companies make chocolate more sustainable? One researcher is trying to find out 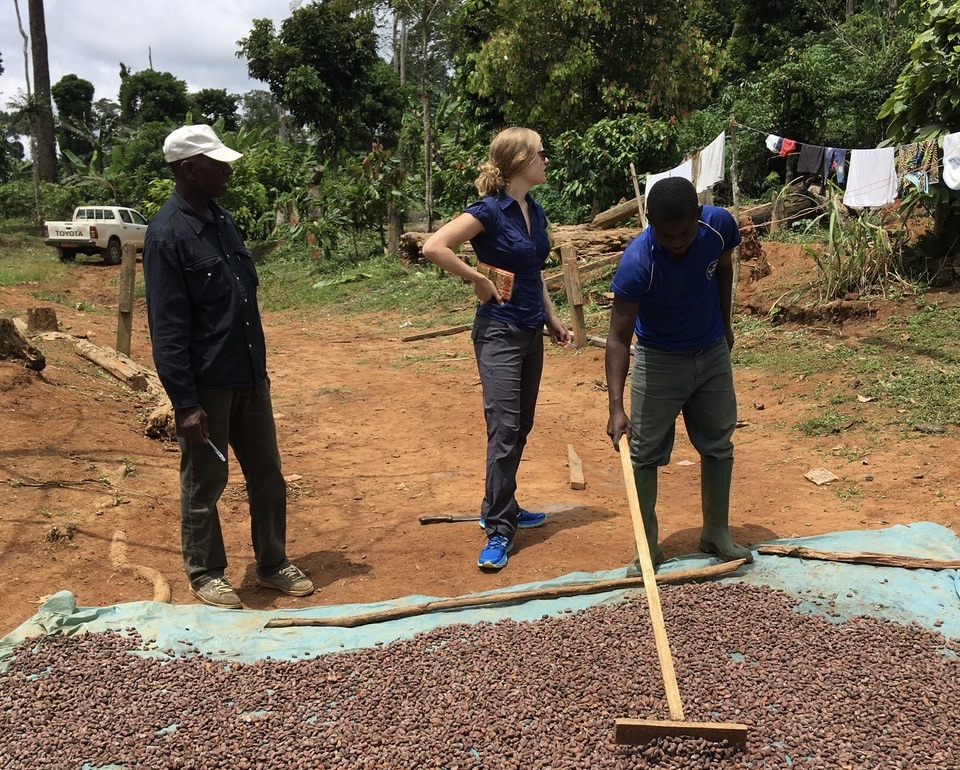 Most of the four million tonnes of cocoa consumed annually worldwide is grown by smallholder farmers in West Africa. About 60 per cent of it will then be sold internationally by three companies. Photo provided by Sophia Carodenuto
Previous story
Next story

Sophia Carodenuto is looking for ways to make food more sustainable in an unusual place: The business practices used by the companies who control the world’s chocolate trade.

Carodenuto — along with Janina Grabs, a postdoctoral researcher at ETH Zurich’s Environmental Policy Lab — wants to know how, and if, these businesses can drive widespread change to sustainable farming.

Each year, the world consumes about four million tonnes of cocoa, most of it grown by small farmers in West Africa. The beans then pass between middlemen along increasingly concentrated supply chains. By the time they reach supermarket shelves, over 60 per cent of the beans will have been controlled by three international commodity companies, she said.

That creates an “hourglass” structure, she said. There are lots of farmers at one end and plenty of chocolate consumers at the other, but they’re only linked by a few large companies. It’s a structure replicated across most commodity supply chains, from coffee to corn.

Often, the same trading companies will manage several commodities at once. For instance, the U.S.-based company Cargill trades cocoa, beef, seafood, and several other commodity crops.

That concentration gives those companies tremendous power over everything from farm-gate prices to farming techniques to the prices paid by consumers. For Carodenuto, that could be a way to encourage more sustainable cocoa farming practices.

“Thinking about how to reach these millions of smallholder farmers … traders are often a key entry point because they aggregate the commodity, and they have a relationship with the farmer — more so, often, than the (government),” she said.

This influence has long been recognized by the trader — and their critics. Over 20 years ago, widespread concern about the environmental and social impacts of industrial commodity farming spurred the creation of third-party certification systems like Rainforest Alliance, UTZ Certified, and Fairtrade. Commodity farmers — including cocoa farmers — need to meet specific environmental, social, and economic standards to be certified.

Historically, governments also played an important oversight role. Since the 1990s, however, their leverage has weakened as many have adopted free trade-oriented policies.

“Traders ... provide a lot of hope for reaching out to millions of smallholders who need support in changing their farming practices,” says @s_carodenuto.

More recently, however, major cocoa producers and manufacturers have also started to develop their own sustainability certificates. Mondelez International, for instance, introduced its proprietary Cocoa Life scheme in 2012.

Traders as actors of sustainability governance in global food supply chains: Initiating a research agenda is a @SSHRC_CRSH funded project resulting from this publication with @JaninaGrabs Check out earlier view: https://t.co/oTiKZxQGY3 https://t.co/CSuRVmjtQX pic.twitter.com/kQIQEEBsNj

These efforts have the potential to be effective, she said. For instance, many farmers can’t afford to transition to more sustainable practices alone. Traders could arguably even have an “ethical” responsibility to offer financial and technical support to farmers they’re requiring to meet expensive sustainability requirements, she said.

But the impact of these corporate schemes remains unclear, Carodenuto said.

“We’ve been looking at what are these sustainability approaches in practice? What are they actually trying to do? How do they compare to previous approaches? And we’ve found a huge gap in knowledge around what traders are actually doing,” she said.

And while they have tremendous influence over farmers and governments, there remain gaps in how effectively these large companies can trace the sustainability of their beans.

Most will draw some of their beans from sourcing areas where they have direct relationships with the farmers and more control over farming practices. The remainder — for some companies, up to 40 per cent — will come from smaller middlemen, eliminating the larger companies’ control over how the beans were grown.

“We’re looking at traders from this diversity of perspectives. You have these huge concentrated companies … but then you also have an important role for traders that are operating informally and under less public scrutiny. There’s a lot less transparency about what they’re doing — and those are some of the key players in terms of sustainability.”

Figuring out how to integrate those smaller players into sustainability initiatives is also key, she said.

With their research in its infancy, Carodenuto and Grabs have no answers yet. Finding them, however, is increasingly important if we want to make cocoa and other commodities more sustainable, they said.

“This relationship between farmers and their downstream partners is so important for sustainable supply chains,” said Carodenuto.

“This is where traders come in — they’re usually the ones who are the first point of contact with farmers. In other words, they provide a lot of hope for reaching out to millions of smallholders who need support in changing their farming practices.”

Naive. Unsustainable is cheaper. Corporations will always choose cheaper. Quarters later than next can look after themselves--money is fungible, if you make a profit today and deplete the resource, you can invest it somewhere else tomorrow. That's what they'll do; anything else is going to be mostly greenwashing.
These multinationals need to be dismembered and in many cases multiply nationalized.