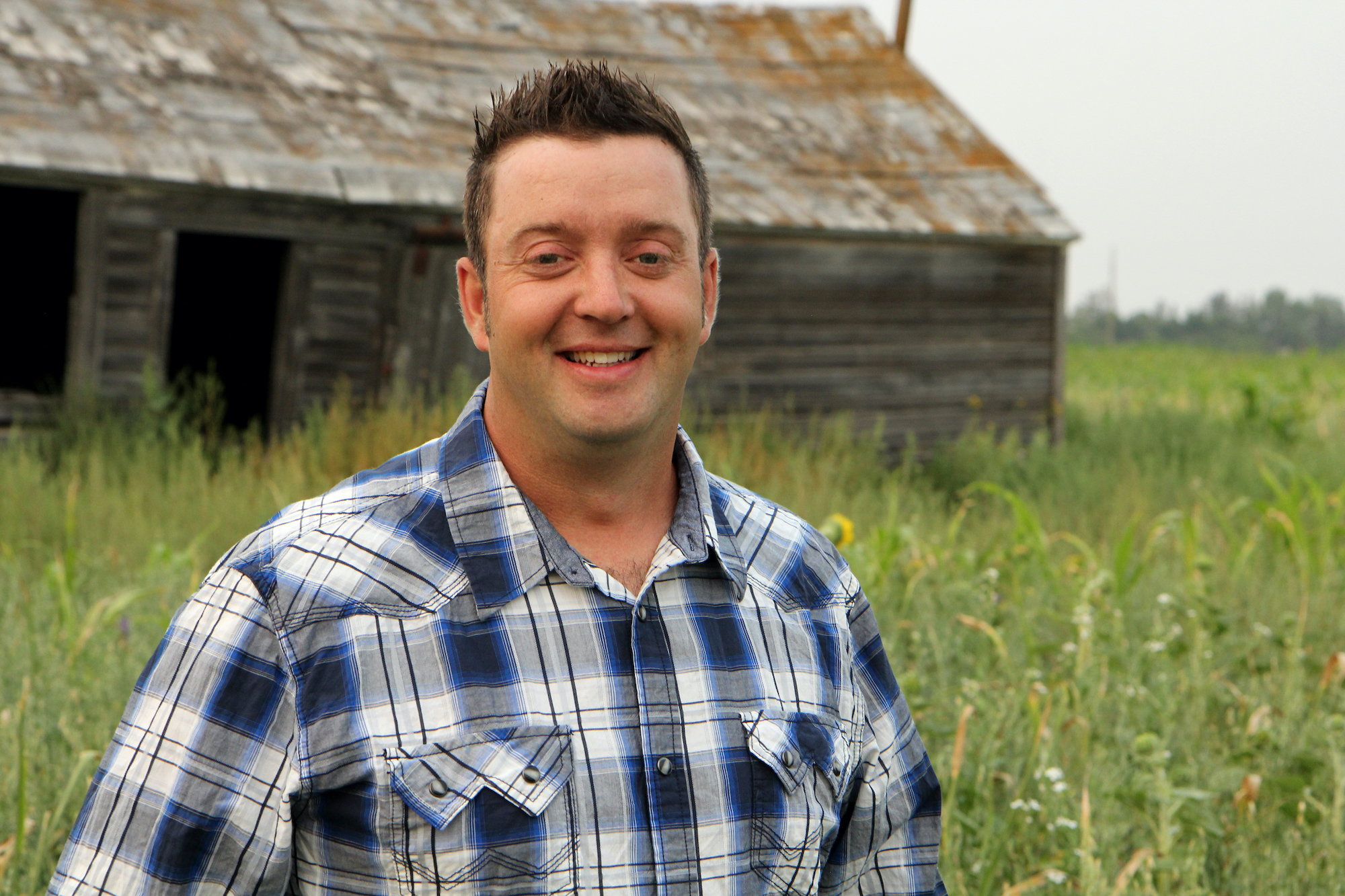 Fifteen years ago, Brooks White brought bison onto his farm and grew cover crops to feed him. To his delight, he said the change improved his soils. Photo provided by Brooks White
Previous story
Next story

Fifteen years ago, Brooks White had no bison and his farm was struggling with floods and threadbare soil. Hoping to improve the situation, the fifth-generation Manitoba farmer took a chance, putting bison on his land to fertilize the soil and planting cover crops in flood-prone fields to feed them.

The effort paid off.

“The improvement we were seeing in water infiltration, soil structure, all these fantastic things happening (were) to the soil,” he said. The farm’s bottom line improved as he diversified his crops and started planting them strategically to minimize fertilizer use.

Those techniques, he later learned, sit at the heart of regenerative agriculture, a suite of farming techniques that mimics natural ecosystems to maximize soil health and sequester carbon. The approach has seen a surge in popularity in recent years, with proponents saying it is a key solution to the climate crisis.

About eight per cent of Canada’s greenhouse gas emissions came from agriculture in 2018, according to a 2020 report by Environment and Climate Change Canada.

Soil accounted for roughly half of those emissions, largely because of nitrogen fertilizers used in industrial agriculture. When applied to fields in excess, they’re broken down by microbes into nitrous oxide, a greenhouse gas about 300 times more potent than CO2.

“This reality is something all Canadians should be concerned about, as soil is integral to our ecosystem and the source of our food,” said Gabrielle Bastien, co-director of Regeneration Canada, an organization dedicated to promoting regenerative agriculture in Canada. The organization recently launched a map to help Canadian farmers and consumers find farms applying regenerative practices.

Regenerative agriculture relies on techniques like cover cropping, no- or low-till farming, and rotational grazing to improve soil fertility and structure. Taken together, they aim to reduce the amount of soil disturbance, making it easier for carbon, nutrients, and microbial communities to become embedded in the soil.

According to a 2020 paper by the U.S.- based Rodale Institute, if used globally, regenerative practices could draw down most of the world’s CO2 emissions, making agriculture a net carbon sink.

“It seems to represent hope,” said @LaurenARickards. Often, sustainability stories are about holding on to the remnants of a dying world — an uninspiring story. Regenerative agriculture is different.

It’s a finding that has attracted lots of interest: Major companies like General Mills and Cargill are planning to incorporate the approach into their supply chains. Both the Biden administration in the U.S., and the Trudeau government have also shown interest in supporting farmers trying to use some regenerative methods on their farms.

But not everyone is convinced.

“There’s certainly a lot of potential for regenerative agriculture to have some important impacts on agricultural production, but also other ecosystem services, and particularly on the mitigation of climate change,” said Sean Smukler, professor of land and food systems at the University of British Columbia. However, he noted the “jury is still out” on the approach’s realistic potential to mitigate — or reverse — climate change.

That’s largely because soil carbon isn’t well understood and very fickle. Carbon is added to the earth by mixing in organic matter like dead plants or manure. This matter is then broken down by bacteria, but they don’t always transform it into a stable mineral form.

Depending on conditions in the field — everything from temperature to moisture levels — they often simply release the carbon back into the atmosphere. Or the carbon remains in the ground, but other greenhouse gases like nitrous oxide or methane continue seeping into the atmosphere, mitigating overall climate benefits.

Endless variations between soil types and farming techniques make assessing the effectiveness of a particular approach almost impossible, he explained.

“We have such variable performance in management, by soil type, by climate. And then, on top of that, we’ve got so many different agricultural systems, so many different crops to be thinking of — there’s quite a bit of science left to do,” he said. In particular, he noted the nitrogen cycle remains relatively ill-known.

Widespread, field-level data — an essential tool to use regenerative techniques more effectively — is also lacking. Major agricultural companies are developing monitoring technologies that could provide this information, but some advocates are concerned that their involvement raises concerns around data surveillance.

“We need to be working on a much more co-ordinated and widespread (data collection) effort … if we’re going to use soils and regenerative ag as a realistic tool for meeting our emissions goals,” Smukler said.

Still, data isn’t the only way to know how best to farm — what crops to plant or which livestock rotations to use, for instance. Farmers know their land intimately and many say they can see which practices are good for it or not. Regenerative agriculture might make it easier for this kind of anecdotal and experience-based knowledge to work hand-in-hand with data.

“On the one hand, (there) is a techie conversation about monitoring” in many conversations about regenerative agriculture, said Matthew Kearnes, a professor of environment and society at the University of New South Wales. “(And) on the other, is a conversation about the form of the landscape and its appearance, and so there’s a really interesting interplay as to what counts as evidence.”

That dynamic opens the door for a broader conversation about what good agricultural practices look like to help bridge a gap between scientists and farmers, he said.

It also points to a new understanding of the role humans and agriculture can play in addressing climate change. No longer a villain or a victim, regenerative agriculture is appealing because it offers an opportunity for people to restore — not destroy — ecosystems and planetary health.

That’s a powerful message and shouldn’t be undermined by the uncertainty surrounding the technique’s potential, said Lauren Rickards, a professor of human geography at RMIT University who works with Kearnes studying the regenerative agriculture movement.

“It seems to represent hope,” she said. Often, sustainability stories are about holding on to the remnants of a dying world — an uninspiring story. Regenerative agriculture is different.

“(It) is not just more energizing because we want to make things better, but because it gives us a role. It renovates the whole position of humans in the environment … which I think is tremendously important,” she said.

Plowing in cover crops uses the kind of energy that zero-till agriculture is designed to avoid. Plowing cover crops into v. poor or depleted soil will constitute a carbon sink for awhile, and the land and soil will 'look better'. But it is not possible to determine if a farm is a carbon sink without sampling and analysis, i.e data. The idea of net-zero farms is very attractive, but like net-zero houses, it requires careful measurement of inputs and outputs to prove the case and innovative techniques to deliver it.

Many cover crops are designed

Many cover crops are designed to be rolled over witjh thje stems oriented in one direction and other crops planted through the cover using a seed drill. No till means just that: no till. Even if some regenerative agriculture cover crops are roto-tilled or plowed in, the soil disruption isn't a deal breaker because these crops are often in the minority.

Status quo farming practices, by comparison, include plowing with every new crop and the regular application of synthetic fertilizer. Hence the destruction of soil structure, the loss of organic material, increased susceptibility to drought and poor drainage.