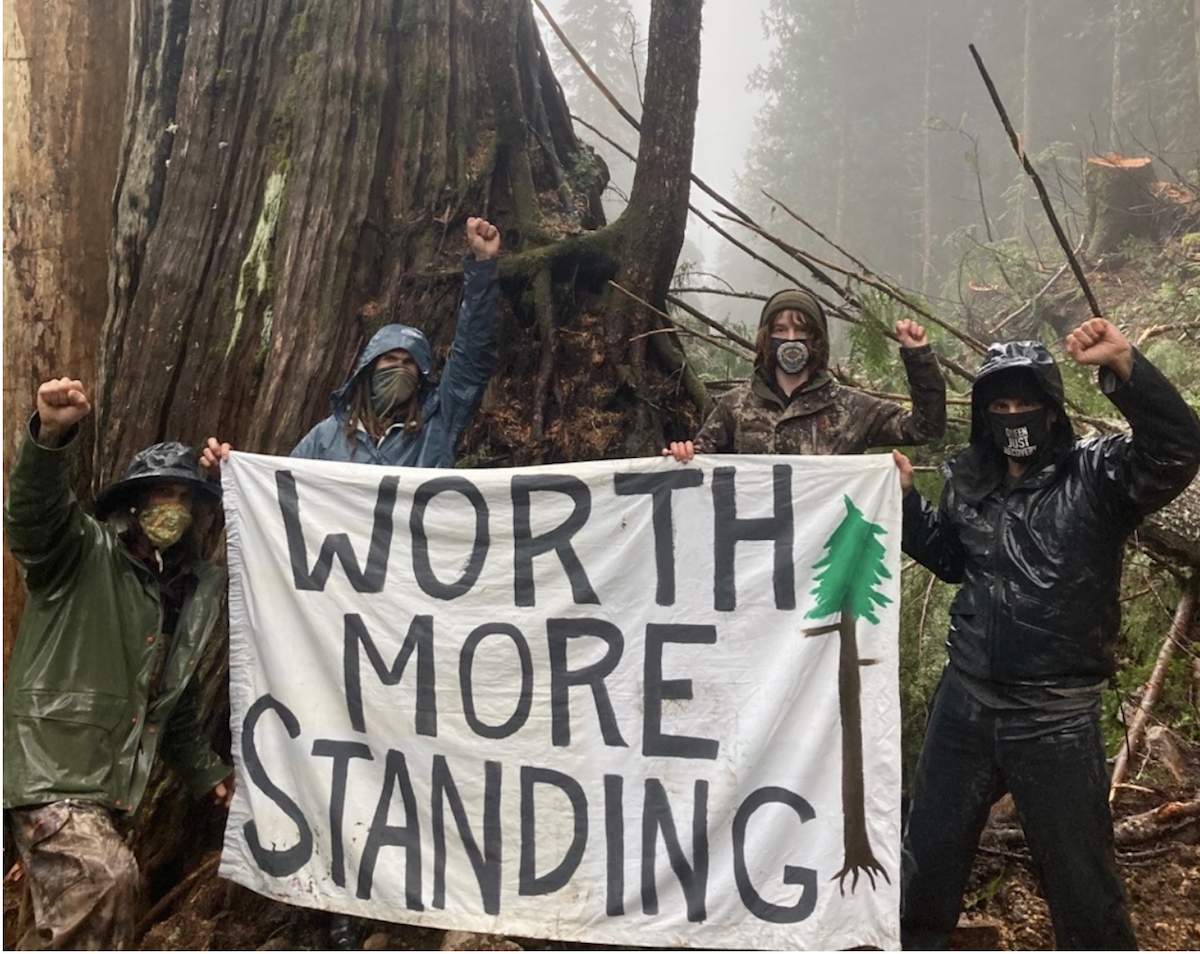 Protesters attempting to protect some of the last stands of old-growth forest on southern Vancouver Island are facing arrest if a logging company gets court approval to disband their camps this week.

Forestry company Teal-Jones has filed an application with the Supreme Court of British Columbia for an injunction to remove the Fairy Creek blockade at various entry points to its Tree Farm Licence (TFL) 46 near the community of Port Renfrew.

The region encompasses the pristine old-growth forest at the headwaters of Fairy Creek with yellow cedars thought to be 1,000 years old, as well as other remaining groves on the Gordon River, Camper Creek and in the Upper Walbran Valley.

A court decision is likely following an online hearing Thursday, said Kathleen Code, who is helping organize the defence against the injunction on behalf of the blockade residents.

Activists from eight different camps have been blocking the logging company’s road building and forestry crews from accessing the area since August, Code said.

“We want (the court) to disallow the injunction but that’s a very rare occurrence,” said Code. “So, our plan is to ask for an extension of three weeks, so that we can better prepare our defence.”

The group of forest defenders, the Rainforest Flying Squad, also hopes to file its own cross injunction against Teal-Jones, she said.

“It’s a separate legal process that will have us filing an injunction against Teal-Jones themselves and bringing in the B.C. government as a third party,” Code said.

“This way, we hope to make them accountable for the decades-long mismanagement of our forests.”

“It's irreplaceable, and once you clear cut it, you have destroyed all of those ecosystems," Kathleen Code, supporter of #FairyCreek blockade battling to save the last remaining #OldGrowth found on southern Vancouver Island. #bcpoli

Teal-Jones wants the court to prohibit the blockades until at least Sept. 4 and authorize the RCMP to arrest or remove protesters violating the order. The police force would determine when to enforce the potential order.

Teal Cedar, a division of Teal-Jones, and its contractors have experience significant business disruption due to the blockades that threaten the company’s right to harvest timber but also the continued operation of its mills, the court application said.

The company values the logs in TFL 46 to be worth $9 million, or approximately $19.4 million if turned into manufactured product.

Teal Cedar also said it advised the Pacheedaht First Nation of its planned harvesting activities in its traditional territory, and after surveying the cut blocks, the nation told the company it’s permitted to harvest in those areas.

However, Pacheedaht elder Bill Jones and some of his family are supporting the blockade and battle to protect the ancient temperate forest, Code said.

Should the Teal-Jones application succeed, each individual forest defender will make the decision about whether they will risk arrest in the battle to protect the old-growth forest, she said.

“But don't think Teal-Jones is going to waste any time,” Code said, adding the blockade isn’t about halting all forestry operations.

“I want to make it really clear. We are not anti-logging,” she said. “We only obstruct areas where the old growth exist.

Protests are being planned in various communities across the province on Thursday to protect Fairy Creek old-growth forest and in solidarity with the camp activists, Code said.

Support for the protest is coming in from communities around the North Island, said Kenny, a member of Sierra Quadra.

“We want to show MLA Michelle Babchuk that her constituents … have fundamental concerns with regard to the government she represents and its protection of old-growth forests.”

The Quadra senior has been trying to protect B.C. ancient temperate rainforests for three decades, and there’s precious little left, she said.

Regardless of where people live on Vancouver Island, or in the province, the need to protect the last remaining stands of old growth is critical.

“I started in 1987 with the Carmanah and the Walbran (forests), and here I am, a septuagenarian, and I’m still at it,” Kenny said, adding the argument of the necessity of intact forests to maintain biodiversity still holds true.

“It’s old hat, and we’ve heard it so many times,” Kenny said.

“However, the critical component now is climate change … maintaining old-growth forests is our best security and our best defence against global warming.

“So, I want to stand as a forest defender and as a witness so that these trees, this ecosystem is preserved."