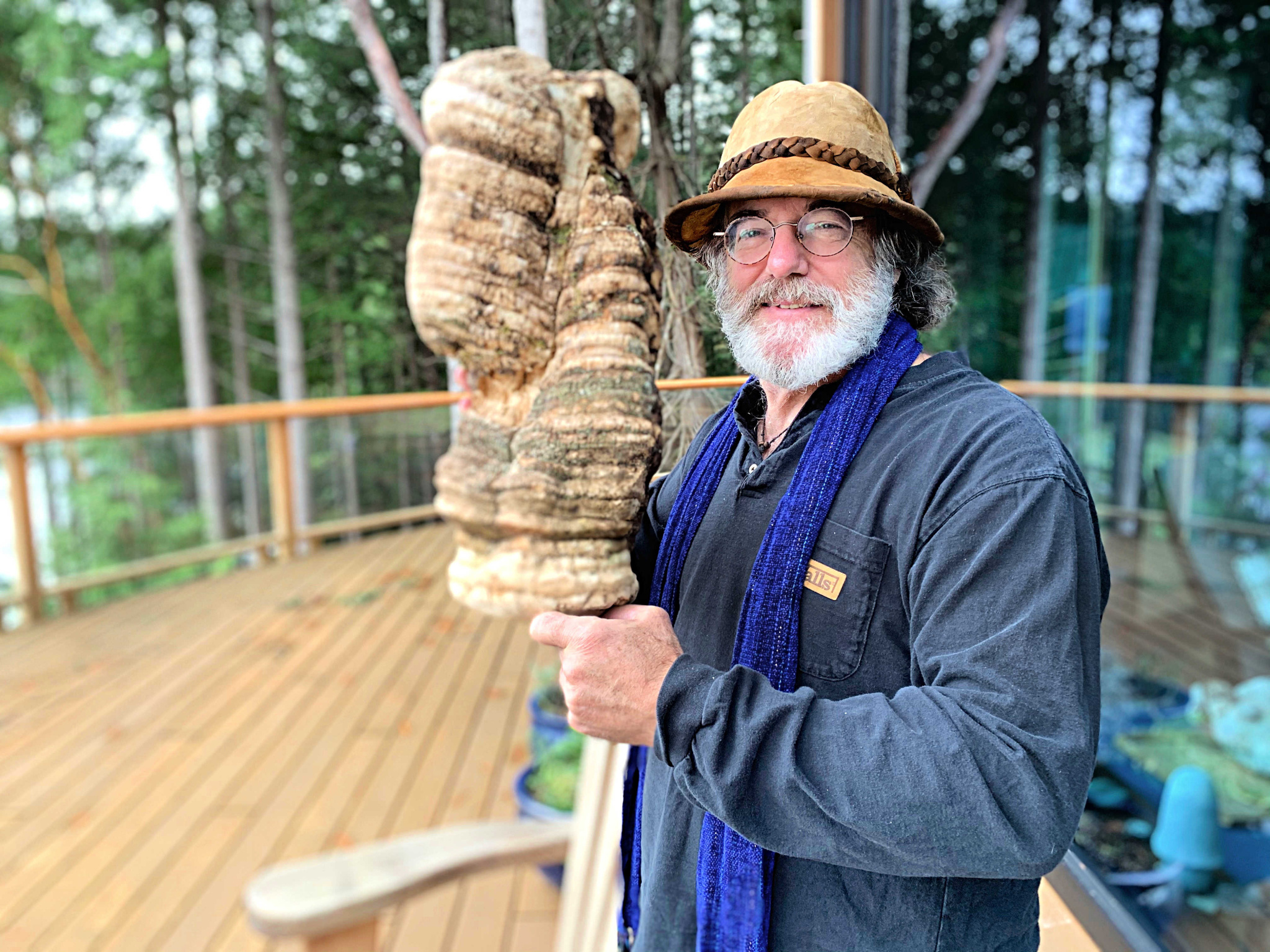 Mycologist Paul Stamets holds an agarikon mushroom, which he says could be helpful in fighting viruses, including COVID-19. Photo by Rochelle Baker
Previous story
Next story

With care bordering on affection, mycologist Paul Stamets hoists up an enormous conk of agarikon to better show it off.

The large, gnarled, woody-looking layered mushroom, more specifically the polypore Fomitopsis officinalis, is about the size of a toddler’s torso.

Its dull outward appearance belies the invaluable medical properties agarikon — and a host of other fungi — might possess, said Stamets, who has been on the hunt for the endangered mushroom for decades.

Used for millennia as traditional medicine to treat respiratory illness, Stamets believes the fungus has antibacterial and antiviral properties, which are potentially more beneficial now than ever during this pandemic age.

“This rare, old-growth mushroom has a multi-thousand-year history of use in Europe,” Stamets said while doing research on Cortes Island, B.C.

“In fact, the Greek physician Dioscorides described agarikon as ‘elixirium ad longam vitam,’ or the elixir of long life,” Stamets said, adding it was used to treat consumption, later determined to be tuberculosis. Indigenous cultures of the Pacific Northwest also report its use, he said.

“Through trial and error over thousands of years, surveying the forest for fungi, they came upon several species that were extraordinary with many potential benefits.”

A big deal in the mycology world, Stamets is a kind of mushroom messiah preaching the word on mycelium to the masses. And it appears he’s making headway.

Not only has he authored several books, but one of his TED Talks, titled, Six Ways Mushrooms Can Save the World, has more than six million views.

“When we cut down the old-growth forests, we are potentially losing genomic libraries that could have a strain of fungi that could have enormous implications for human biosecurity, and moreover, habitat health,” says mycologist Paul Stamets.

More recently, he participated in Fantastic Fungi, a documentary featuring beautiful imagery and a retinue of professional and amateur mycologists.

In the film, they argue that mushrooms — and their larger underground network of fungal filaments, mycelium — are the potential answer to a host of issues, including disease, depression and climate change.

Stamets has participated in a dizzying range of research projects exploring fungi properties and their effects on certain strains of tuberculosis, pox viruses and as a potential means to filter toxins or pollutants from the environment.

He is particularly excited about findings that suggest fungal extracts can help protect bees from some viruses that contribute to colony collapse.

But only a fraction of the millions of existing fungi have been identified or had their potential medical applications explored, Stamets said.

So, maintaining that reservoir of biodiversity is critical to unlocking their known and unknown potential, he adds.

Stamets sees B.C.’s old-growth forests as an invaluable resource in terms of their fungal genome, particularly when it comes to agarikon.

#Cloning #Agarikon to #protect it from #extinction

One way of protecting the #biodiversity of #fungi – #mycodiversity– is to #clone a wild #specimen and get it into #culture. Click the link for the full video and description! #mushrooms #pnwhttps://t.co/J8z5B9zrvI pic.twitter.com/EJWYcDo2iI

The long-lived mushroom — which can survive up to 75 years but is endangered in Europe and rare in the Pacific Northwest — is typically found sprouting from trees aged 150 years or older, Stamets said.

“When we cut down the old-growth forests, we are potentially losing genomic libraries that could have a strain of fungi that could have enormous implications for human biosecurity, and moreover, habitat health,” Stamets said.

“Which is to say, saving old-growth forests can be seen as a matter of international defence against pandemics,” Stamets said.

“And I think those words resonate with a deeper truth, even more so today.”

So Stamets is trying to culture and preserve as many strains of agarikon possible in hopes of finding a potential super strain.

He has around 80 strains banked so far and hopes to discover more, particularly on Cortes Island, which he describes as a haven for the ancient fungus.

“But, there's more agarikon on this island than I've seen in any habitat, anywhere I've been.”

He even hopes to establish a research unit on the island.

“I consider Cortes Island as an ideal field station,” he said. “What I plan to do is to create a subsidiary that will employ people … in these efforts to save the forest and its mycodiversity.”

Stamets stresses he never picks agarikon mushrooms when he finds them. They are too valuable alive. He simply takes a small sample to culture them for further testing.

He is currently working to establish clinical studies using the fungus to treat COVID-19 patients in the United States.

And he’d love to see similar studies established in Canada.

However, he concedes, it can be difficult to get scientists or physicians to take up research projects.

“It's weird science,” Stamets said, adding that exploring the medical potential of fungi is an emerging field.

“I mean, when someone first hears this, I can understand why it sounds a little bit out there. I don't blame them for that.”

But saving old-growth forests is a potential investment that could go well beyond the value of producing two-by-fours, he said.

“I think that British Columbia could go down in medical history as being a reservoir for having fungi in the old-growth forests that could prevent pandemics — now and in the future,” Stamets said.

“But that’s a hard story to tell.”