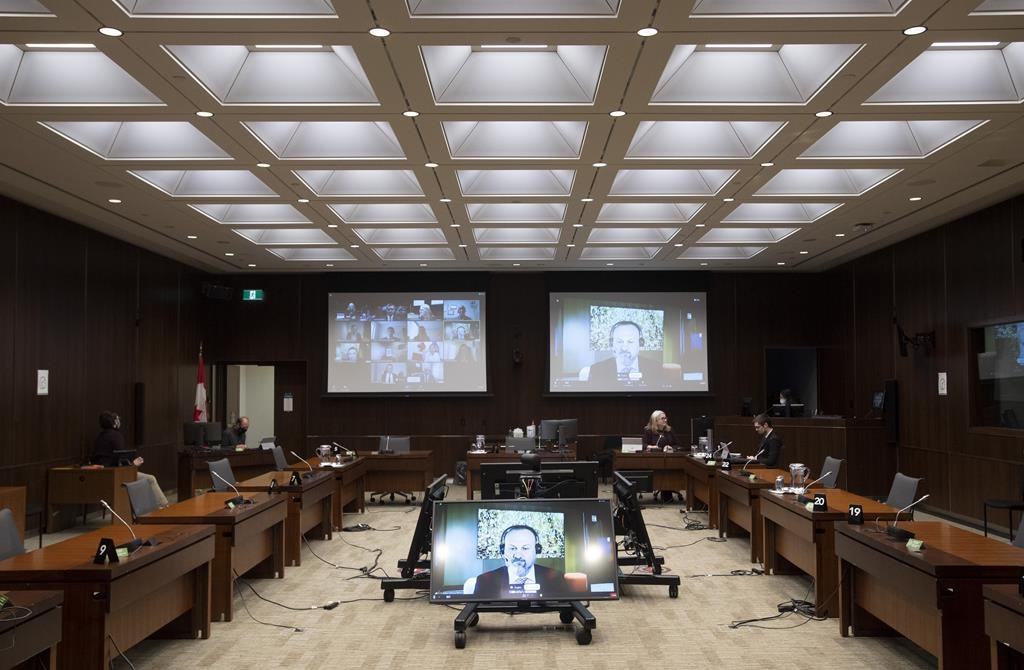 MindGeek Canada managing director Feras Antoon appears on screen as he waits to appear virtually before the House of Commons Standing Committee on Access to Information, Privacy and Ethics on Feb. 5, 2021 in Ottawa. File photo by The Canadian Press
Previous story
Next story

More than 70 parliamentarians from all parties are calling for a full criminal investigation into Pornhub's parent company following testimony from survivors.

The demand, spelled out in a letter Monday to RCMP Commissioner Brenda Lucki, comes two weeks after a similar request by more than 100 victims of exploitive content they say was posted to websites owned by MindGeek.

The lawmakers cite recent evidence by victims and child-protection organizations alleging the Montreal-based company regularly shared child pornography and sexual assault videos as well as content shot or posted without the consent of subjects.

MindGeek has denied all accusations of wrongdoing, saying it is a global leader in preventing distribution of exploitive videos and images.

"MindGeek has zero tolerance for non-consensual content, child sexual abuse material (CSAM), and any other content that lacks the consent of all parties depicted," the company said in an email this month.

"The harrowing stories of the survivors of CSAM and non-consensual imagery shake us to our core."

At least five lawsuits have been filed against the company in the U.S. and Canada over the past year on behalf of survivors of child abuse, sex trafficking and non-consensual image uploads.

The 53 MPs and 20 senators who signed the letter accuse MindGeek of failing to report cases of child pornography to the Canadian Centre for Child Protection and the U.S. National Center for Missing and Exploited Children between 2011 and 2020. The company confirmed in an email it "officially began" reporting to the latter early last year.

Lawmakers from all parties call for a full criminal investigation into #Pornhub's parent company following testimony from survivors. #CDNPoli #MindGeek

The signatories say they were "shocked" to learn from RCMP deputy commissioner Stephen White at the House of Commons ethics committee last month that the agency had "zero outstanding investigations" into the company.

Conservative MP Arnold Viersen, who co-chairs the all-party parliamentary group to end human trafficking, says the hoops survivors have to jump through to get illegal content pulled down are "egregious," and that existing laws need more rigorous enforcement.

"The law is good, it’s just purely not being enforced," he said Monday in an interview, adding that he is open to expanding the provisions against sexual exploitation.

In a March 1 letter, a group of 104 survivors and 525 NGOs in countries ranging from Austria to Zambia applauded the ethics committee for studying the issue.

The coalition went beyond calling on Ottawa to encourage an RCMP investigation, demanding the government to take "immediate legislative and regulatory action to protect children from this predatory and unethical corporation."

MindGeek draws 170 million visitors a day, including four million Canadians, and generates $460 million in annual revenue, according to the company. It frequently ranks among the dozen most-visited sites in the world, ahead of Netflix and Zoom.

Though legally headquartered in Luxembourg, the company's main office sits in a squat glass building along a sunken highway in Montreal.

MindGeek has pushed back against accusations it allows child sexual abuse material on its sites.

The platform works with dozens of non-profit organizations that aim to flag content and stop online child exploitation. It also says it uses extensive measures to shut out such material, including "a vast team" of human moderators to manually review each of the 6.8 million videos uploaded annually and remove illegal material, along with automated detection technologies.

Toronto woman warns others about photos surfacing on image-sharing site