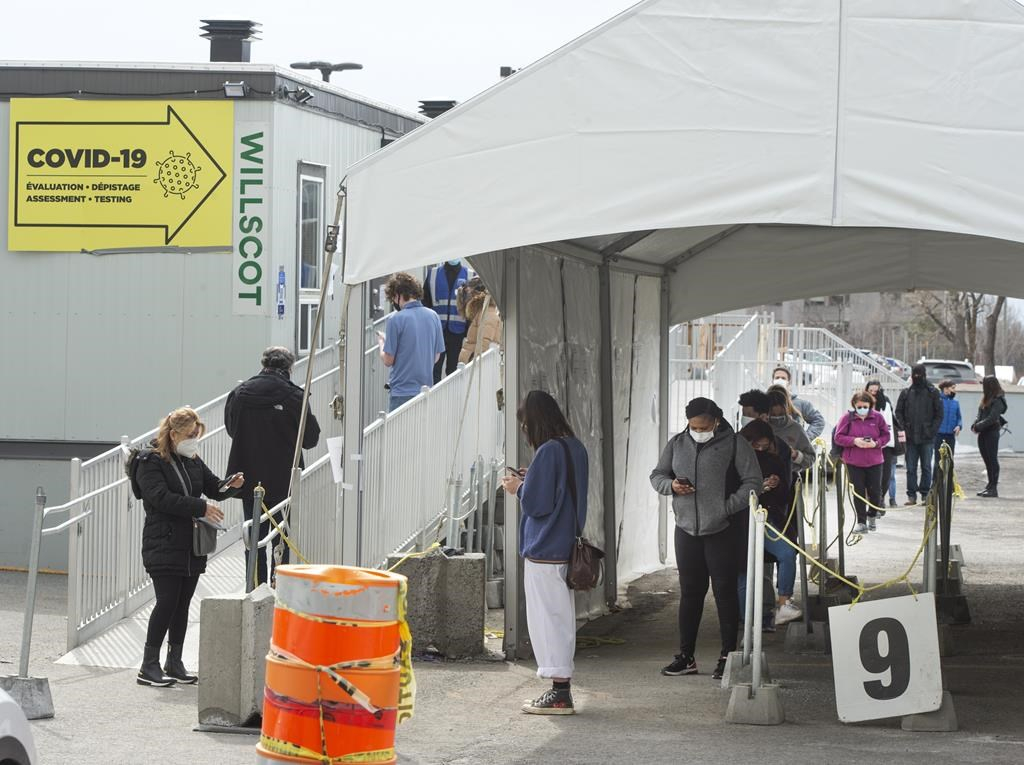 People line up at a COVID-19 testing clinic on Wednesday, March 24, 2021 in Montreal. File photo by The Canadian Press/Ryan Remiorz
Previous story
Next story

Federal officials are "anxious" over new modelling showing an increase in daily COVID-19 cases, which they say comes at a bad time with several religious holidays nearing, and people wanting to gather with families.

Data shows severity indicators and daily cases are back on the rise as variants of the virus continue to spread in parts of the country, with incidence highest among young adults.

Dr. Theresa Tam says daily cases have increased more than 30 per cent over the past two weeks, with an average of 29 deaths reported daily.

The Jewish holiday of Passover is this weekend while Easter follows a week later. Ramadan, the Muslim holy month of fasting, begins April 13.

"Every time we hit a holiday period, we're always a bit anxious," Tam said in a press conference Friday. "Passover, Easter, Ramadan, (these are) times when families and churches and other gatherings typically occur."

Tam says rising cases indicate we're in a "very tight race" between vaccines and variants of concern, which make up an increasingly high proportion of new cases in several provinces.

All six provinces west of the Atlantic region are currently experiencing, or likely to experience, a resurgence in cases "in the coming days and weeks," she noted, adding that jurisdictions need to clamp down on rapid spread quickly.

"We want to make sure (holiday gathering) does not happen right now," she said. "(It's) not the time."

The data released Friday by the Public Health Agency of Canada shows that while the number of cases has declined in Canadians aged 80 and older, incidence rates are highest among young adults aged 20 to 39.

Some of the decrease in incidence rates among older Canadians is a result of vaccine efforts, Tam said.

Canada administered more than 190,000 vaccines on Thursday, the most since the rollout began in mid-December, and 11 per cent of the country's adult population has now received at least one dose.

Procurement Minister Anita Anand said Friday that Canada was seeing a surge in deliveries that's expected to continue, despite recent export restrictions from the European Union.

Anand says six million more doses of COVID vaccines are scheduled to flow into Canada over the next three weeks, matching the six million doses that have arrived in the country since the approval of the first vaccine in December.

"We are closely monitoring the global environment, including export restrictions in a number of jurisdictions," Anand said. "Our officials across numerous departments as well as our suppliers are working ahead of time to ensure that Canada's vaccines continue to arrive in our country."

Despite the surge in vaccine supply, Ontario Premier Doug Ford expressed continued frustration with his province's stock from the federal government.

He said Ontario has received word that a shipment of Moderna doses expected this week will not arrive until next week.

"I've been very complimentary and collaborative with the federal government, but enough's enough," he said. "This is becoming a joke. We need more vaccines."

Anand announced earlier Friday, however, that 1.5 million doses of AstraZeneca, procured in a deal with the United States, are scheduled to arrive Tuesday.

Anand also said Moderna has upped its delivery frequency from every three weeks to every two weeks, and reiterated that "at least" one million Pfizer-BioNTech shots will be arriving in Canada every week through the end of May.

The influx in vaccines comes as variants continue to spread across the country, however.

Tam said more than 7,100 cases of variants of concern have been reported across Canada, with B.1.1.7, first identified in the U.K., making up 90 per cent of those cases.

"These severity indicators can be seen across all age groups of the adult population," Tam said. "It is a very important set of information that should drive home to all of us why it is important to maintain these (restrictive) measures."

The Ontario Hospital Association said Friday that the third wave is threatening the province's ICU capacity as the number of severely ill patients approaches a previous peak.

Meanwhile, Quebec's government-mandated public health institute says more transmissible variants will represent the majority of new infections in the province by the first week of April.

Some provinces have recently loosened restrictions despite rising variant activity, including Ontario, which increased its indoor dining capacity to 50 people in most regions and will allow hair salons and outdoor fitness classes to reopen in regions that are under lockdown.

Quebec reopened gyms in parts of the province on Friday, and places of worship in those areas are allowed once again to welcome up to 250 people indoors.

Manitoba this week also announced the limit on outdoor gatherings is to go up to 25 people from 10, and a 50 per cent capacity rule for retail outlets is to max out at 500 people rather than 250.

Tam says there's "merit" in provinces taking regional approaches with their restrictions, but notes that "up-and-down measures" may not be the best way to combat spread.

"If there are detections that this activity is ramping up, then definitely don't relax," she said. "Try and keep that even keel until the vaccines have gained much more of acceleration in terms of coverage."

This report by The Canadian Press was first published Friday, March 26.