Cutting back on waste is possible — if you can afford it 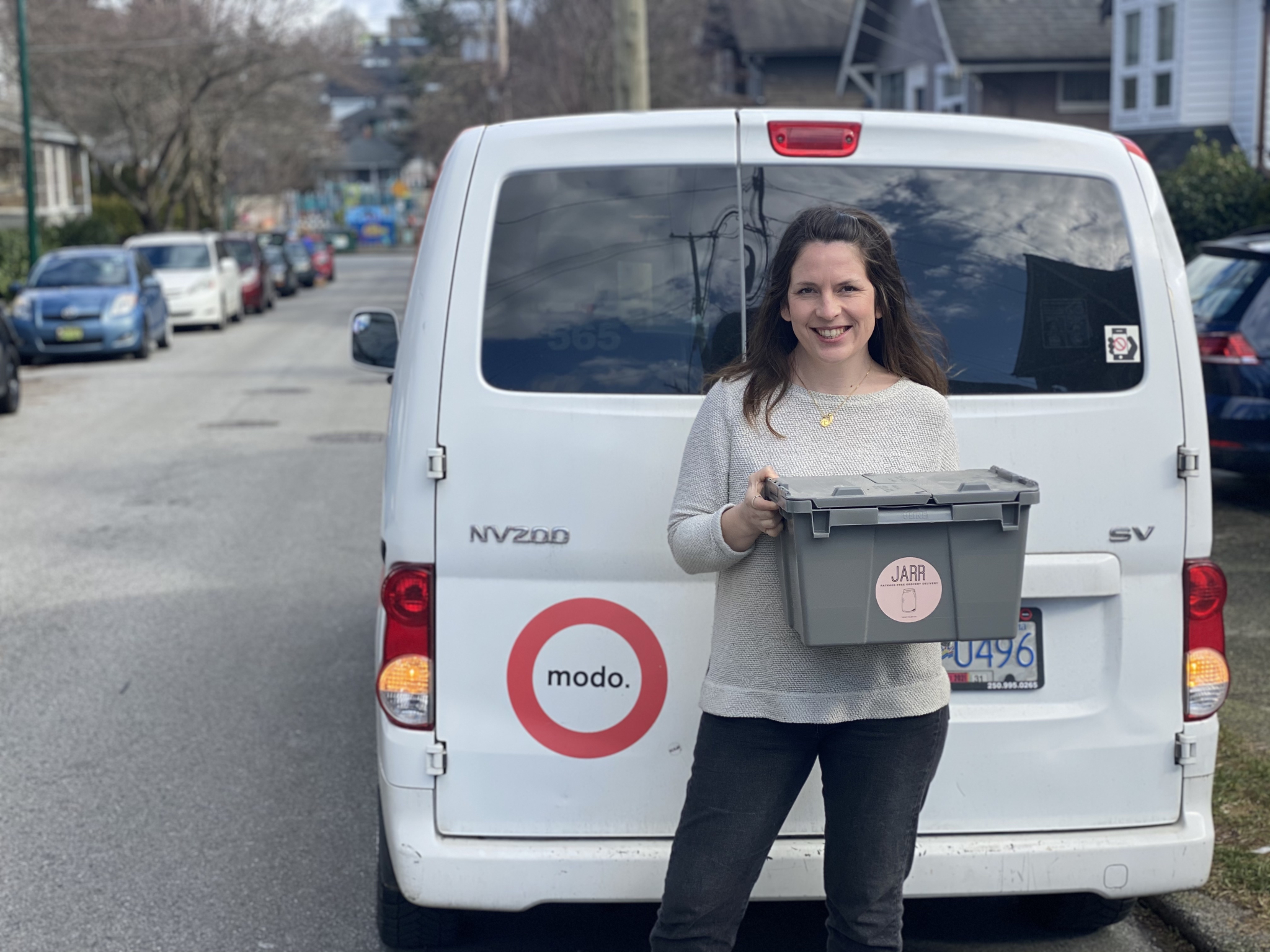 Amy Ash knew reducing her waste wouldn’t be easy. But the cost of wasting less took her by surprise.

“I had always been motivated to not make unnecessary waste,” said the Vancouver resident, who started to actively reduce her waste in 2017. At the time, she was working six days a week at low-wage, precarious jobs in the city.

“Where it became difficult was when I would have liked to have gone to the zero-packaging stores. It was almost cruel how expensive everything was.”

Each year, Canadians generate roughly 3.2 million tonnes of plastic waste. Almost a third of it is packaging, and only nine per cent is recycled, according to a 2019 report commissioned by Environment and Climate Change Canada (ECCC).

With growing concern about the environmental impacts of plastic waste, more Canadians are actively trying to reduce the amount of trash they produce. Packaging-free (or “zero-waste”) groceries are popping up across the country — packaging alone is responsible for about a third of the country’s plastic waste, the ECCC report found — and encouragements to “reduce, reuse, and repurpose” are increasingly common.

Yet, despite the minimalist ethos driving the shift, reducing waste is a privilege.

“There is a real association between wealth and being a good environmental citizen,” said Myra Hird of Queen’s University, a fellow of the Royal Society of Canada and an expert on waste. Shopping at zero-waste or health food stores is often more expensive than buying food at larger chain supermarkets, where avoiding packaging is near impossible, she said.

For many Canadians, reducing waste could be a trade-off between having money for food and other necessities, or reducing their environmental footprint. In June, Statistics Canada reported that about 5.1 million Canadians had lacked food at least once in the previous month. With an increasing number of people facing precarious financial situations as the pandemic wears on, experts anticipate hunger — a symptom of poverty — will be on the rise.

It’s a social ill driven by low-wage, precarious work: Wages are the main source of income for about 65 per cent of food-insecure people, according to PROOF, a research team investing policy and food insecurity. Low wages hit women, Indigenous people, and people of colour particularly hard, noted a 2019 report by the Canadian Centre for Policy Alternatives.

“There is a real association between wealth and being a good environmental citizen,” says Myra Hird of @Queensu. #Packaging #Plastics #Recycling

Nationally, the annual income for someone working full-time at minimum wage is, on average, $27,000. For many, that’s not enough to get by, and they need to take on two — or more — jobs to make ends meet. That time commitment can make reducing waste even harder.

“Income isn’t just about being able to buy things that are more expensive (and) eco-friendly,” said Hird. “It’s also about having the time to do that.”

Buying clothes second-hand, searching out less-packaged products, cooking more — common techniques to cut back on waste — all require time. For people working long hours or who have other time commitments, like child care or elder care, finding the time to cut back on waste is difficult, she said.

Ash concurred. While working six days a week, she only had her day off to shop for groceries. But purchasing packaging-free food meant hopping between four grocery stores scattered across Vancouver: Bulk goods stores like Bulk Barn or Costco for dry goods, a local greengrocer’s for produce, and a supermarket for miscellaneous necessities.

“It was crazy — it was the only thing that I would do,” she said.

Clothing was easier, she said, with clothing swaps, thrift stores, and gifts from friends keeping her comfortably dressed without waste.

Still, the costs of zero-waste living aren’t limited to consumers. The stores working to reduce the amount of packaging for products they sell also face financial hurdles.

“There are things that are pricier that are zero-waste, and the reason is that we’re often working with small-batch producers, in a local context, to bring you items that are not mass-produced,” said Emily Sproule, owner of JARR, a package-free grocery delivery service in Vancouver.

Wholesale distributors often couldn’t provide her business with minimally packaged goods, leading her to work more closely with smaller, local — and often more expensive — farmers and food processors. Larger grocery chains likely face similar issues when it comes to reducing the waste they and their customers produce, she said.

“We’ve built systems around plastic production … I really believe that reusable systems are not that hard, but we’ve got into this pattern of distribution that has to do with disposable and mostly plastic (packaging),” she explained. “What I really hope is that small companies like mine ... are a signal to bigger companies that this can be done and (that) this should be part of our day-to-day life and not an outlier.”

It’s also likely that zero-waste products would be more affordable if they were more widespread. Packing-free supply chains are currently much smaller than conventional ones, but as they grow, it will be possible to make greater economies of scale, she said.

Some major retailers have started to shift their practices. For instance, in February, Loblaw Companies Ltd. — Canada’s largest grocery chain, which owns Great Canadian Superstore, No Frills, and other brands — announced a partnership with the global reuse platform Loop. The agreement will let customers in Ontario purchase dozens of products like ice cream, sauces, and pet food in reusable containers, which are returned to Loop after use to be washed and refilled.

Companies alone can’t solve the problem, Hird said. Reducing waste is tied into crafting government policies that ensure people have adequate incomes — and that the plastics industry reduces its production. But until those kinds of policies are implemented, becoming zero waste will be too expensive for many Canadians.

“Zero-waste … I feel like privileged people can afford it, and people who are struggling to get by simply can’t,” said Ash.

Well, yes, that is what they

Well, yes, that is what they call the hidden cost of pollution.

This is also why costs are so low for manufactured goods - waste from extraction, transportation, and production are avoided by dumping into the community environment instead of proper disposal.

Note that we are also going

Note that we are also going to pay for *past* cheap disposal, like today in Piney Point (?) in Florida where a century of manufacturing, a century ago, has left a legacy that has to be paid by us today.

I wonder if a cost/benefit

I wonder if a cost/benefit analysis would support purchasing packaging-free food if it means "hopping between four grocery stores scattered across Vancouver.". I mean, presumably there is a carbon footprint associated with that too.. and there is a waste-to-energy plant in Burnaby. I think I might bicycle to nearby stores; and if I save on gasoline, which is so expensive in BC, perhaps give a donation to 'Plastic Bank'.. a charity also based in Vancouver.

Bingo. When you see any

Bingo. When you see any article about eco-friendly efforts costing money, red lights should be blinking, red flags waving.

"Money" generally equates to some sort of effort that uses up resources.

The fabric bags to avoid single-use plastic grocery bags are a thing, for me. We'd buy one, two three. They would be forgotten. At the store, we'd just buy more. Then more. We soon had a bag full of bags. The effort and carbon to make them, of course, were as much as the industrial work to make thousands of plastic bags.

I finally got bags that squashed down so fine I could keep them in a big cargo pocket of khakis, which, as a middle-aged White guy, is my standard uniform. Now, they're always with me, and we've stopped buying more bags. But our lifetime debt is probably unpayable.