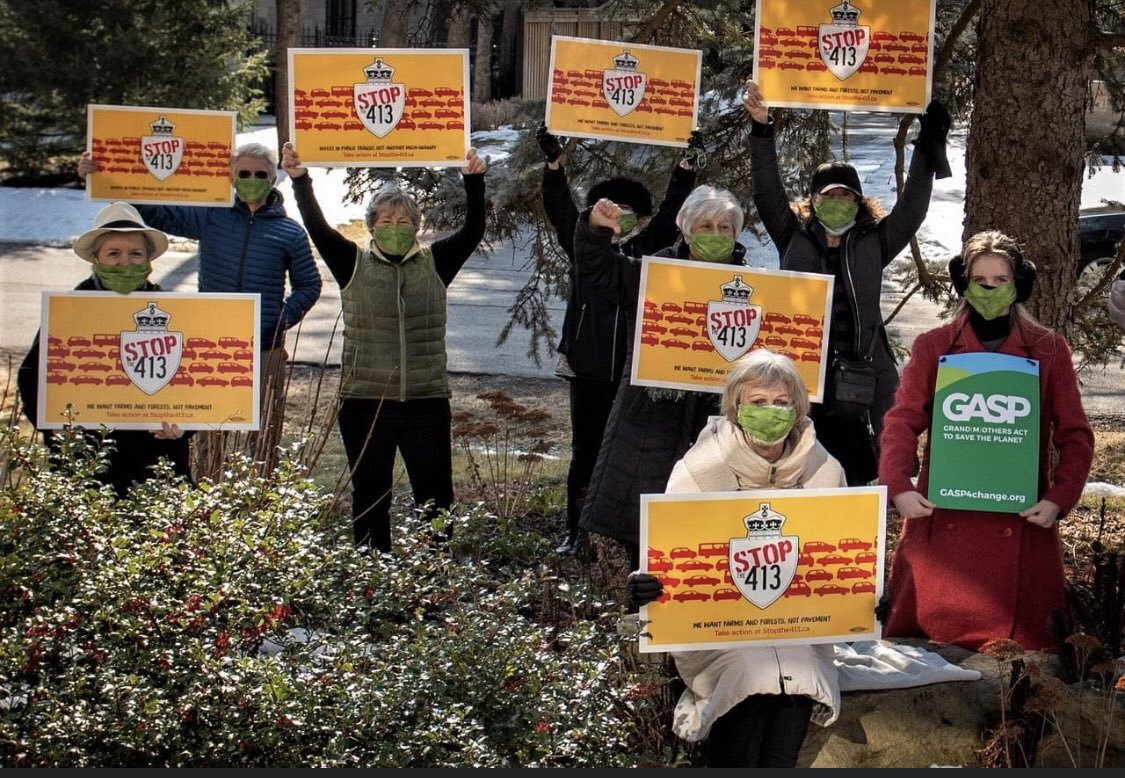 Demonstrators opposed to the planned Highway 413 project protest at an event organized by Grandmothers Act to Save the Planet (GASP) in Oakville, Ont., in March 2021. Photo from GASP4Change / Twitter
Previous story
Next story

Ontario’s opposition parties renewed calls for Ontario to scrap the controversial Highway 413 on Tuesday in the wake of a National Observer/Torstar investigation into the money, power and influence behind the proposal.

“You just have to be buddies with Doug Ford and fund his party, and you'll get what you want,” Ontario NDP Leader Andrea Horwath said, referring to the investigation’s findings.

“Having it in black and white like that, I think, forces us all to just take a step back and say, ‘Is this really how we want to go?’”

If built, Highway 413 would stretch around the edges of the Greater Toronto Area, reaching from Highway 401 near Milton to Highway 400 north of Vaughan. Though a previous study found it would save drivers less than a minute, the Ford government contends that it would help clear highways forecast to be over capacity in a decade and shave half an hour off commutes.

“That’s a life-changing amount of time,” the government said on the project’s website in a post published a few days before the joint investigation.

“It’s the difference between calling home to say goodnight and tucking your kids into bed yourself.”

The Ford government is pushing for the project ⁠— which has an estimated price tag of $6 billion to $10 billion ⁠— to receive a “streamlined environmental assessment” that would allow it to begin work like bridge construction and expansion before the review is done. The route cuts through the protected Greenbelt, along with farmland, numerous waterways, wetlands and endangered species habitat.

The joint investigation, published Saturday, found that eight of Ontario’s most powerful land developers own thousands of acres of land near the planned route of the highway. It also found that four developers have connections with Ford’s Progressive Conservatives through party officials and former Tory politicians who are now registered lobbyists.

The developers have also donated significant sums to support the PCs, with $753,000 going to the party and $60,000 to the third-party conservative group Ontario Proud.

“Just cancel the highway,” Ontario Green Party Leader Mike Schreiner said Tuesday. “Use the $6 to 10 billion to spend on other priority projects, such as transit, long-term care and schools.”

After a National Observer/Torstar investigation into the money, power and influence behind the controversial highway proposal, opposition parties at Queen’s Park renewed calls for the Ford government to kill the idea once and for all. #onpoli

The idea of Highway 413 was shelved by the previous Liberal government in 2018 amid growing concerns about its impact on the environment and urban sprawl. The Ford government revived the proposal later that year.

Ontario Liberal environment critic Lucille Collard said Tuesday that the PCs should take a cue from her party and take a step back from the Highway 413 proposal.

“That was not the best solution to address the congestion around the (Greater Toronto Area),” she said.

“We need to innovate and be creative and factor in the environment… Those should be primary, not constructing a highway.”

We always knew he was

We always knew he was incompetent. Now the evidence of his corruption expands similarly.

Many Ontario voters should be required to attend Remedial Voting 101.

And they never even got their buck-a-beer.