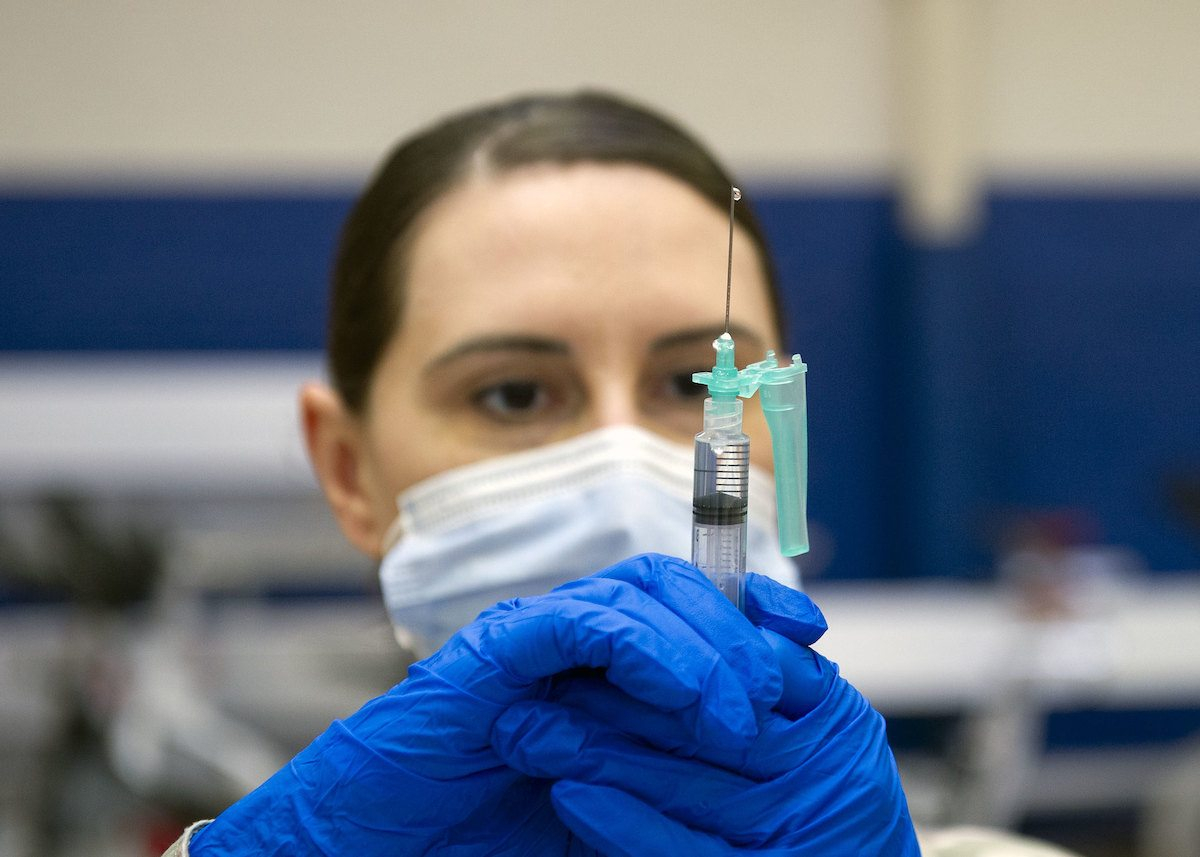 The problem with treating the opinions of a professional scientist and your Uncle Frank on Facebook as though they’re equal should be obvious, writes Max Fawcett. Photo by Official U.S. Navy Page / Flickr (CC BY 2.0)
Previous story
Next story

What do American podcast megastar Joe Rogan, a UCP MLA from Airdrie and Alberta’s skyrocketing COVID case numbers have in common? Far more than you might think. While there are any number of respected health experts the public can turn to for information on the pandemic, freedom-loving elected officials like MLA Angela Pitt are driving them towards less reputable sources. As we’re seeing now, with emergency rooms and intensive care units filling up with COVID patients, the results of this refusal to embrace expertise are proving deadly.

In a recent Facebook post, Pitt encouraged her followers to “do your research and do what’s right for you” to decide on the vaccine. She doubled down on that post in remarks to the press last week, saying “(The post) in no way encouraged or discouraged anyone to participate in their ability to vaccinate themselves, but in fact encouraged them to find the information that they need to make that decision.” When asked whether she’d taken the vaccine or not, Pitt demurred. “I choose not to disclose that information,” she said.

If the informational landscape consisted solely of academic papers and peer-reviewed science, people doing their own research wouldn’t be a problem. But this isn’t where most people are grazing for their intellectual nutrition. Instead, they’re feeding off the junk food that predominates on Facebook and Twitter, where media entrepreneurs like Spotify’s Rogan — who recently mused that healthy 20-year-olds shouldn’t get the COVID vaccine — have audiences millions of times larger than those who tend to follow public health officials, leading scientists and researchers.

After some major blowback (including, one presumes, from Spotify, the company that is reportedly paying him $100 million) Rogan walked his comments back on Friday. “I am not a doctor,” he said. “I am a fucking moron. I am a cage-fighting commentator... I am not a respected source of information even for me. But I at least try to be honest about what I am saying.”

While Rogan is willing to admit his error, there is an endless array of digital misinformation peddlers who aren’t. They trade in half-truths, weaponized confusion and outright conspiracies, and they hold a disproportionate influence over the people doing the kind of “research” Pitt suggested for her community. Real research, after all, is grinding and time-consuming stuff. It’s not something that happens on a Facebook page or in the comments of a YouTube video. And yet, that’s exactly where it is happening for far too many people right now.

In Pitt’s defence, her own party’s leader isn’t doing much leading here. On the same day Pitt doubled down on her Facebook post, Jason Kenney gave a press conference where he suggested “there’s, I think, a false idea out there that lockdowns stop viral spread and that they can be effective in every instance. That’s not the case.”

That would come as a surprise to the people at The Lancet, who just came out with a paper suggesting that lockdowns work — and that countries that imposed more stringent measures have performed better on both health and economic metrics. “Evidence suggests that countries that opt for rapid action to eliminate SARS-CoV-2 — with the strong support of their inhabitants — also better protect their economies and minimize restrictions on civil liberties compared with those that strive for mitigation,” the paper says.

But Kenney and his government seem committed to discounting the public health information and advice they’re getting from actual experts, and instead pandering to the anti-science voters that helped elect them. And while this mismanagement of the COVID crisis will eventually fade into the background as the vaccines take over and help bring the pandemic under control, it will have taken far longer than it had to — and come with a much higher price than was necessary. That’s a direct result of the confused messaging coming from Kenney and his government MLAs, and the amplifying effect it's had on anti-maskers, vaccine skeptics and COVID-19’s other unwitting enablers.

If there’s one thing we should take from this when it’s all over, it’s that treating the work of scientists and researchers like an optional buffet is a dangerous new kind of privilege. The problem with treating the opinions of a professional scientist and your Uncle Frank on Facebook as though they’re equal should be obvious. And yet, that’s what thousands of people have done in Alberta — in some cases, with the full support of their local MLA.

Angela Pitt, Drew Barnes and the other members of Alberta’s anti-science caucus will continue to frame their reckless behaviour here in terms of freedom. For his part, Kenney will almost certainly continue to ignore their defiance, lest he provoke his already mutinous rural caucus members by mounting a more robust defence of the scientific consensus. But it should be abundantly clear by now that what we need from our elected officials during times of crisis is brave leadership, not a willingness to imitate the comments section on a Facebook page. The cost of cowardice, as we’re seeing right now, is just too high.

Are the anti-science crowd

Are the anti-science crowd also doing their own research about how cars, trains, airplanes have been constructed before using them? After all, the "experts" could have made mistakes. And if they end up in hospital with COVID-19, will they insist that those treating them remove their masks and question the veracity of every "life-saving" procedure on offer?

I have heard incredibly

I have heard incredibly tragic stories of people in the US who are actually dying of covid-19 and refuse to believe it. The nurses are urging them to FaceTime their family for one last time and they won't do it because it's all fake. How did we come to this?

One good thing about the

One good thing about the pandemic is that the anti-science ignorance of many Albertans is out in the open........they are demonstrating their self centred ideas about personal freedom and their contempt for actual research on the streets and in the press........and Alberta has the highest rate of new infections in the entire country right now as a result. Conservative politicians are also being outed across Canada...their preference for the free market and being 'open for business' over doing what's right for the public during a pandemic is plain to see. Money, not people, profits not health, is their priority.

That and selling out public spaces to coal strip mining or mega highways...projects 'too big to fail', that will devestate yet more natural spaces. They follow the money. Our seniors and our children go without adequate protection.

Of course for them covid is a hoax. It has to be. Their ideology can't survive the reality we're facing, both from the pandemic and from the climate catastrophe that may well be fueling novel outbreaks like covid 19.

The "experts" vision is

The "experts" vision is limited to their science but they ignore the history of epidemics; it is known that the poor are the usual victims of disease because they do not have access to nutritious food. While we wait for a vaccine, we should be following a nutritious diet to strengthen our immune system so that we can fight off or cope with disease more easily. My mother remembered that her mother insisted that the family eat a healthy diet during the Spanish flu: she went to school and the family did not get sick. During the polio epidemic, my mother insisted that we eat a healthy diet: we went to school and did not get sick (at the same time scarlet fever was around). We looked after our immune system while we waited for the polio vaccine and I remember when Connaught isolated the virus and I still remember the headline in the paper "Polio is Conquered" when the Salk vaccine was announced. During this COVID19 pandemic, I have followed the rules of the experts, but I also have looked after my immune system: no refined sugar, no refined flours, no heavily processed foods - sensible eating as people have done in the past.
On April 18 on CBC "Fresh Air" I heard Dr. Isaac Bogosh say that many of the patients he sees are either obese or diabetic. So I ask, as an old lady, why no medical person has suggested the government put a good stiff tax on refined sugar and refined flour to encourage people to eat a healthy diet?

Oh dear, just what Max is

Oh dear, just what Max is talking about. "Experts" in scare quotes. Anecdotes presented as evidence. Cherry-picking quotes from Dr Bogosh.
The poor have suffered more in this pandemic because they do not have the privilege of working form home, are not able to isolate (multi-generation households), and for many other reasons. Access to nutritious food is not one of them.
The idea of boosting one's immune system with "nutritious foods", or supplements, or whatever, is nonsense.

I am very disappointed that

I am very disappointed that is no real dialogue on a topic that affects our health, and will continue to do so indefinitely. Despite the risk having their medical licenses revoked or worse, many doctors and experts ARE speaking out, questioning the prevalent narrative and big pharma. Not that COVID doesn't exist, obviously, but that our response is not what is best for society's long term health. These doctors however are quickly labelled as "quacks", while those that fall into line are citing "real science". Very disconcerting, especially for someone whose grew up with the scars of the devastation that relying on "experts", following the majority, and being controlled by fear caused in the not so recent past.

What would be "best for

What would be "best for society's long term health"? What are these brave doctors advocating? What is the "prevalent narrative"? What was this "devastation [caused by] relying on "experts""? What is your suggestion? What is your area of expertise?

- that Alberta and Ontario ICUs are packed to overcapacity with COVID patients, demonstrating nearly perfectly the inverse correlation between their weak government policy on lockdowns and other COVID-fighting measures compared with other jurisdictions with stronger policies.
- that those patients are increasingly younger
- that the largest number of them are from crowded workplaces populated by the working poor who take transit, and who have no other options, especially paid sick days
- that the virus has mutated several times into forms that are orders of magnitude more contagious
- that this information is not some kind of theoretical, elitist scientific modelling, just plain old observation by the overwhelmed professionals who staff the ICUs

Those who support anti-vaccination and anti-lockdown efforts out of misinformed political philosophy and ignorance need to have a good sit-down with ICU doctors and nurses to discuss how they are putting caregiver's lives at risk on top of their own families, friends and nearby strangers, hopefully before they become reality-denying patients themselves.