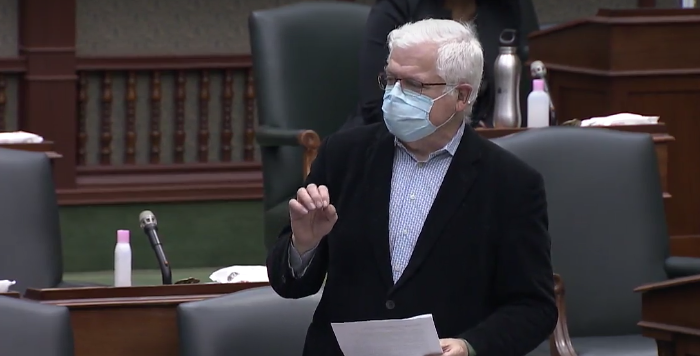 Ontario NDP MPP Peter Tabuns questions the government about an RCMP investigation into ads backed by a developer with ties to the PCs. Screenshot from Ontario Legislative Assembly
Previous story

The RCMP is investigating whether third-party ads backed by a prominent developer with ties to Ontario Premier Doug Ford violated election financing rules.

In February 2020, Vaughan Working Families ran full-age newspaper ads in the Toronto area attacking teachers unions, which the Ford government had locked horns with that winter. In June, Elections Ontario found that the ads had been an “apparent contravention” of election law.

The president of the corporation behind Vaughan Working Families, Vaughan Health Campus of Care, is Michael DeGasperis, a prominent developer whose ties to Premier Doug Ford and Education Minister Stephen Lecce were highlighted in a recent National Observer/Torstar investigation.

Elections Ontario began looking into the ads in Feb. 2020 after a request from the provincial NDP. That month, by-elections were held for two Ottawa seats. Third-party groups in the province that wish to run political ads in the year before an election or by-election are required to register with Elections Ontario.

After an initial probe, the agency concluded Vaughan Working Families failed to register, and forwarded its findings to law enforcement for a full investigation.

A lawyer for Vaughan Working Families, Stephen Thiele, said the group "categorically denies" that it contravened election rules. "No charges have been laid in connection with the ads, which were simply circulated in print only in parts of the GTA to express an opinion on a matter of fundamental importance to a developed democracy: public education," he said in an email.

News of the RCMP investigation was revealed by the NDP in question period Tuesday.

“Now that the RCMP is involved, is there anything else this premier or minister of education would like to tell Ontarians what they know about the attack ads against teachers?” said Ontario NDP MPP Peter Tabuns, the party’s climate critic.

“I have full faith in Elections Ontario to do its job,” Government House Leader Paul Calandra retorted.

The RCMP are investigating whether Vaughan Working Families violated election rules. The corporation behind it is led by Michael DeGasperis, a developer whose ties to the PCs were highlighted in a recent National Observer/Torstar investigation.

The RCMP confirmed the existence of the probe in an email Tuesday but did not answer questions about its scope. If convicted, the maximum penalty is a $5,000 fine.

“The investigation by the RCMP is still ongoing and we therefore will not comment further or provide any details,” RCMP Cpl. Dmitri Malakhov said.

Michael DeGasperis, the CEO of TACC Construction and president of Arista Homes, did not immediately respond to an email seeking comment and a voicemail left for an assistant.

Wow! The Vaughan “Working” Families have some deep pockets when you consider it costs between $50-$80,000 for these 2 one day ads, not to mention the PR firm costs to develop the ads! @ETFOeducators #ETFO @OFLabour @osstf @OECTAProv @AEFO_ON_CA pic.twitter.com/B2LpUcNJBs

The National Observer/Torstar investigation ⁠— which delved into the money, power and influence behind the Ontario government’s push to build the controversial Highway 413 ⁠— found that DeGasperis hosted Ford and Lecce in a private luxury suite at the BB&T Center in Miami to watch a Florida Panthers’ NHL game in December 2018. Lecce represents the riding of King-Vaughan, where Arista Homes is based.

In a statement, spokespeople for Ford and Lecce said both politicians paid for their own tickets to the game and no government business was discussed.

The game took place shortly after the PCs revived the Highway 413 proposal, which had been shelved by the previous government.

Companies connected to the DeGasperis family own three properties with a total of 168 acres near the proposed highway, as well as five properties owned jointly with other developers, the joint investigation found. If the project is built and development is allowed to spread along the route, the value of those lands is expected to rise dramatically.

The DeGasperis family are prolific Progressive Conservative donors, contributing $332,265 to the party since 2014, the investigation found. TACC Developments, a DeGasperis company, is also part of a consortium of developers that donated $50,000 to third-party pro-PC group Ontario Proud in 2018.

This story was updated to include comment from Stephen Thiele, a lawyer representing Vaughan Working Families.

$5,000 fine? Why NOT break the law? That's a pathetic penalty for breaking democracy. Is there no end to right wing corruption?