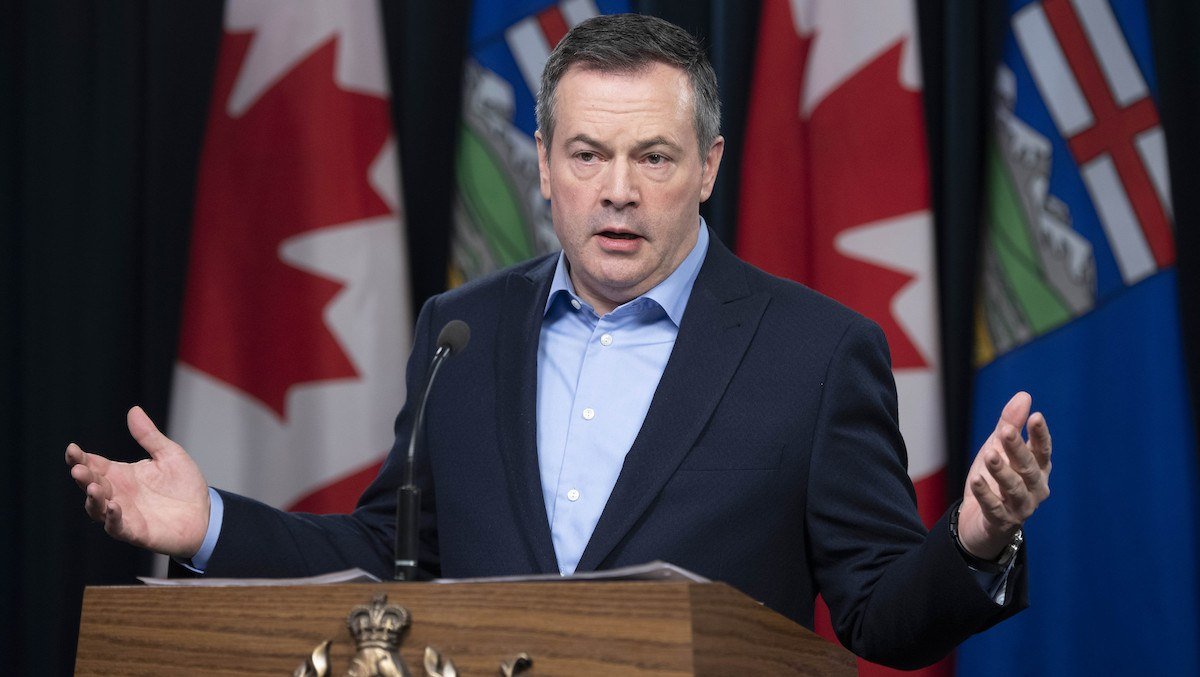 When it comes to the growing global focus on so-called ESG (environment, social and governance) metrics, Alberta’s oil and gas industry is talking the talk. Slides have been added to investor presentation decks, committees have been struck and key messages have been developed. The UCP government is even in the midst of its own conversion on the road to climate Damascus here, one that was highlighted by the creation of a new “ESG secretariat” in March. Premier Jason Kenney, who once referred to climate concerns from international investors as a “flavour of the month,” has apparently accepted that it’s now a permanent part of their diet.

But when it comes to actually walking the walk, it seems they’re stuck at the crawling stage. Case in point: the Alberta government’s Mine Financial Security Program, which collects deposits from oilsands mine owners and, in theory, protects the public from having to clean up after them. But most of those payments happen near a mine’s end of life, and so far Canada’s large oilsands companies have only paid down $1 billion against estimated cleanup costs that range from $28 billion (according to said companies) to as much as $130 billion (according to the Alberta Energy Regulator). This discrepancy has been flagged repeatedly, including by the province’s own auditor general in a 2015 report.

You might think that the COVID-19-driven market crash last March, when oil briefly traded at negative prices, would have been a wake-up call to start taking that discrepancy more seriously. But based on recent reporting by the Financial Post, it seems like the Kenney government is hitting the snooze button instead.

The current system requires companies to put up more money if the ratio of their assets to their cleanup costs falls below 3-to-1, and it seems many did that last year. But rather than forcing them to pony up the cash needed to bring those ratios into alignment, the government is going to give them a one-time waiver.

“Government officials confirmed to the Financial Post that the security deposits collected this year are expected to be similar to those collected in previous years,” Geoffrey Morgan wrote, “but will be substantially less than they would have been under the existing calculations.”

Once again, the problem of remediating Alberta’s ever more massive oilsands tailings ponds will be left to the future. And as economist Jason Dion wrote in a 2018 report for Canada’s Ecofiscal Commission, this approach is baked into the very design of the MFSP program. “Many of the design features of Alberta’s MFSP support economic activity at the expense of deterrence and compensation,” he wrote. “These choices limit the financial-assurance burden on individual firms, supporting economic activity in the sector. But they also lead to weaker deterrence and compensation.”

Those design features include allowing companies to submit undocumented estimates of assets and liabilities, as well as including both proven and probable reserves in those calculations, which “may overstate their financial health.” More worrisome, perhaps, is that the MFSP allows companies to file reclamation plans that rely on technology (like so-called “water capping,” which involves covering the mine tailings with an artificial lake or wetland) that hasn’t even been proven to work. “If water capping proved ineffective and the firm that operated the mine was no longer in operation,” Dion wrote, “any costs of remediation over and above the financial assurance held by government would fall to Alberta taxpayers.”

When it seemed like oil prices would remain high for the foreseeable future, this willingness to kick the can down the road was understandable, if not morally defensible. But in 2021, as large countries and corporations commit to net-zero emissions targets and embrace the challenge of decarbonization, that’s no longer an option. According to the International Energy Agency’s so-called “Sustainable Development Scenario” — the one that’s aligned with Paris Agreement targets — demand for oil is currently peaking and will drop nearly 33 per cent by 2040 to 67 million barrels per day.

Prices may continue to rally in the near term as the OPEC cartel holds its fire and global supplies struggle to recover from COVID-19. But it should be clear by now the growing global effort to reduce emissions will mean a reduction in demand for Alberta’s oil. As the University of Calgary’s Sara Hastings-Simon and Martin Olszynski wrote in March, “this sudden windfall in oil prices represents the last best opportunity to address the sector’s outstanding liabilities and ensure that the public isn’t left holding the bag. The AER should act quickly and set the mandatory spending targets sufficiently high to ensure that the profits from higher prices are also used to meaningfully address liabilities, not simply enrich owners or shareholders.”

If the Kenney government is truly serious about being a global leader in ESG, it needs to put its money — and its legislative might — where its mouth is so frequently these days. Environment Minister Jason Nixon has apparently promised a “long-term solution for the Mine Financial Security Program to better protect our environment and taxpayers,” although it remains to be seen what that actually looks like. But one thing should be abundantly clear by now: the time for can-kicking is over.

This kind of lip service from

This kind of lip service from the Alberta government is what we should expect. Now that its becoming almost impossible to deny the reality of global warming or the role fossil fuel extraction has played, and is playing, in that growing catastrophe........its time to talk big while continuing to subsidize the climate killers and stick it to an unwary public. Big fossils don't do cleanup.

Instead, unremediated messes will continue to accumulate....and the strip coal mining of the prairie region's water reservoir will proceed apace. Water remediation is a joke, given what fracking and now open pit coal mining, have done and will do to our limited water supply....but I'm not surprised UCP'ers would come up with water pollution as a form of environmental cleanup!! Dump it in the water has been a time honoured form of industrial 'remediation' for extractivist industries.

Changing our government is essential. Doing some research and facing the massive environmental debt successive conservative governments have allowed to accumulate is as essential. Continuing with current policies guarantees the degradation of our public resources....and makes any future remediation cost prohibitive.

There is another way forward in Alberta; we have the sun and wind and underground thermals for it. We need to act now to build the new economy and begin radically lowering our greenhouse gas emissions.

Two things. On the total

Two things. On the total costs of cleanup, the corps say $28 billion, the Alberta Energy Regulator says $130 billion. Well, the corps obviously have every reason to lowball as much as they can get away with. But the Alberta Energy Regulator itself certainly has plenty of pressures to understate the costs--I wouldn't treat that $130 billion as the high end of what's likely.

Second--water capping?! "Duhh, we want to keep the toxic goop from getting into the water table, right? Uhhh, I know, we'll cover it with WATER! Duhhh, that should do it!! What could go wrong?" Really, what on earth?

It needs reminding that

It needs reminding that bitumen not oil, that so-called “oil sands” is as incorrect as “tar sands,” but that bitumen sands is what the bitumen is deposited in, and that mining and smelting bitumen is the most extreme GHG emitter of all petroleum production, a barrel of bitumen requiring almost as much energy to be smelted out of the sand as that barrel contains itself. (About three-quarters of all barrels with be thence combusted into the atmosphere: bitumen is at least twice as polluting as conventional oil production.)

The pertinent fact is: bitumen is the lowest grade of petroleum next to asphalt. Not only is it economically and environmentally expensive to produce, it’s too thick to flow in a pipe so has to be diluted with a gasoline-like solvent to be piped anywhere (another extra expense compared with real oil which naturally flows in a pipe), and also has a very high sulphur and ‘ash’ content which makes it more expensive to refine into useable crude and fuels. Kenney loves to insist that dilbit (“diluted bitumen”) commands such a low price because there’s only one market: the refineries of the southern USA—that Alberta’s is therefore beholden to this single market which is why TMX (Pipeline to the West Coast for shipping in supertankers) is, he says, vital because, he says, “Asia” will pay a higher price for dilbit. He says...

The fact is: bitumen is a low-grade product. That’s why it fetches a lower price than real oil. No Asian country has committed to paying a premium for this low-end product and it is unlikely any ever will. China isn’t becoming the biggest economy in the world by being stupid.

And, finally, if all these weren’t bad enough, the paradigmatic winds are blowing away from fossil fuels—particularly low-value, high-polluting ones like bitumen. Conventional oil producers will increase their share of a diminishing pie as the paradigm shifts.

As long’s Jason Kenney thinks bitumen will regain the peak price it once had, Alberta cannot do the things it needs to do: wind the Dilbit export industry down, diversify the Alberta economy and help petroleum workers transition to new jobs, and clean up the abandoned well-heads. As a professed market fundamentalist, Kenney should know that the first objective is already taking care of itself in the form of lower, infeasible prices. If he doesn’t start getting industry to pony up cleanup costs while they’re still marginally profitable, Albertans—and all Canadians—will be stuck with the bill and lower revenues to pay it as Big Oil divests itself of low-profit reserves.