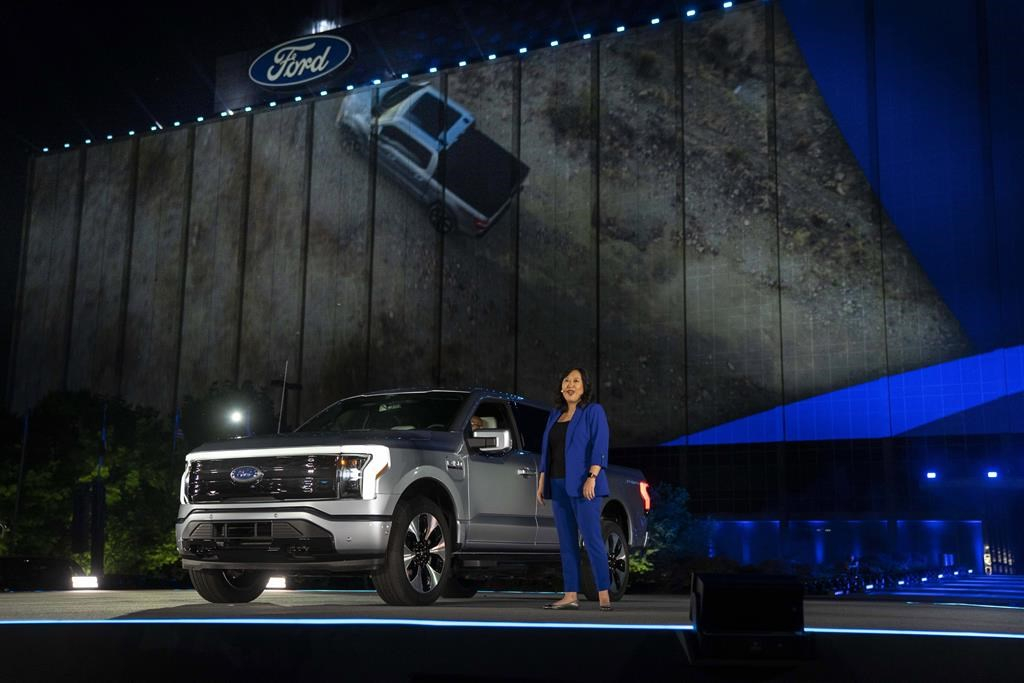 Ford plans to open a battery development centre near Detroit by the end of next year to design, test and even do small-scale manufacturing of battery cells and packs. Photo by David Zalubowski / Associated Press
Previous story
Next story

DETROIT (AP) — Ford expects 40 per cent of its global sales to be battery-electric vehicles by 2030 as it adds billions to what it's spending to develop them.

The automaker said in a presentation for investors Wednesday that it will add about US$8 billion to its EV development spending from this year to 2025. That brings the total spend to nearly US$20 billion as Ford begins to develop and build batteries in a joint venture with SK Innovation of South Korea.

Under former CEO Jim Hackett, Ford was criticized by analysts for moving too slowly on its turnaround and future vehicle plans. But those plans have accelerated under CEO Jim Farley, who took over last October.

“Today is show, not tell time, for the Ford team,” Farley said at the start of the presentation.

Ford announced two new electric vehicle platforms to handle pickup trucks, commercial vehicles and SUVs, such as the Ford Explorer. It also said smaller vehicles in Europe would be built on underpinnings from Ford partner Volkswagen. But company executives wouldn't give details about when the new electric vehicles will go on sale.

Much of the 40 per cent electric vehicle sales target will come from Europe, where the company has pledged to convert its entire passenger vehicle lineup to electric power by 2030.

The global auto industry and government policymakers are trying to pivot away from internal combustion to battery power as a way to curb climate change. Some European countries, as well as California, plan to phase out petroleum powered vehicles, while U.S. President Joe Biden is promising to spend billions on charging stations as well as tax credits and rebates to get people to switch.

In addition, shareholders at ExxonMobil voted Wednesday to replace at least two of the company’s 12 board members with directors who are seen as better suited to fight climate change.

Much of the 40 per cent electric vehicle sales target will come from Europe, where Ford has pledged to convert its entire passenger vehicle lineup to electric power by 2030. #EVs #Autos #Electric

Farley said Ford's financial performance hasn't been acceptable in recent years, but it has accelerated its turnaround plan and made progress in the past few quarters. The company is now generating cash flow so it can grow the scale of its electric and commercial vehicle businesses, he said. Ford predicted it would post an eight per cent pretax profit margin in 2023.

The company also announced it would create a separate business called Ford Pro that will focus on commercial and government fleet buyers. It expects the business to generate US$45 billion in annual revenue by 2025, up from US$27 billion in 2019.

It also expects to have about a million vehicles capable of getting over-the-internet software updates by the end of this year. Ford says it will have more vehicles with that capability than Tesla by July 2022. This opens up the chance added revenue through driver assist technology and digital subscription services, a US$20-billion market by 2030, Ford said.

In the U.S., Ford's largest market, electric vehicles are only 1.2 per cent of Ford's sales through April. Ford currently offers only one all-electric vehicle, the Mustang Mach-E SUV, but by next spring, it will have an all-electric F-150 pickup and a battery powered Transit big commercial van on the roads. The company said 70,000 customers have put down US$100 deposits to reserve an electric F-150 in the week since it was unveiled. Ford's F-Series pickup is the top-selling vehicle in the U.S.

Ford said it plans a new rear-drive, all-wheel-drive electric vehicle architecture to bring a new generation of high-sales vehicles, including an electric Ford Explorer SUV and other larger SUVs with two and three rows of seats.

The company also plans additional cargo vans and pickup trucks from the new architecture, and it expects one third of pickup truck sales to be fully electric by 2030, said Hau Thai-Tang, the company’s product development chief.

She said 70 per cent of Mustang Mach-E electric SUV sales came from other auto brands, proving that EVs will help Ford increase its sales.

As an example of its turnaround plan taking hold, chief financial officer John Lawler said international businesses, including Europe, China and South America, lost over US$2 billion per year for the past two years, but in the first quarter generated a US$500-million profit.

Lawler wouldn't commit to when Ford would restore its dividend, which was suspended at the start of the coronavirus pandemic. He said the company is focused on investing in growth areas and will bring the dividend back “as soon as practicable.”

The US$8 billion in additional electric vehicle spending would go toward the joint venture with SK Innovation to develop and manufacture batteries announced last week. The venture will build two North American factories to make batteries for roughly 600,000 electric vehicles per year by the middle of this decade. The companies say they have signed a memorandum of understanding, but details on the ownership structure and factory locations have yet to be worked out.

This story has been updated to correct that Jim Farley took over as Ford CEO in October 2020, not August.

EVs could soon be cheaper to make than fossil fuel vehicles