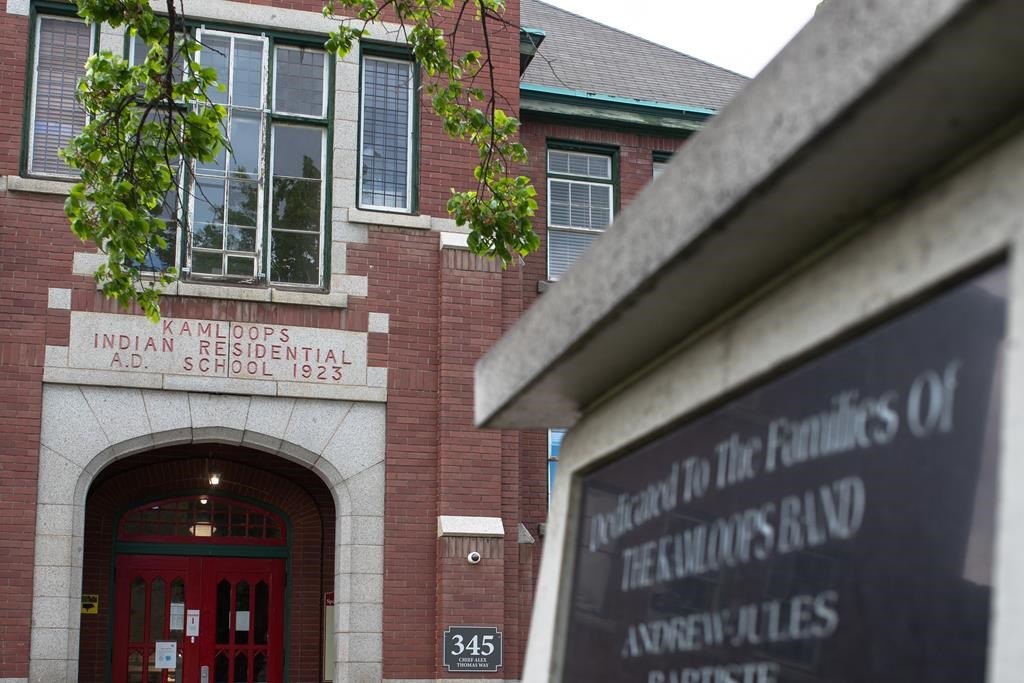 KAMLOOPS, B.C. — The remains of 215 children have been found buried on the site of a former residential school in Kamloops, B.C.

Chief Rosanne Casimir of the Tk’emlups te Secwépemc First Nation said in a news release Thursday that the remains were confirmed last weekend with the help of a ground-penetrating radar specialist.

Casimir called the discovery an "unthinkable loss that was spoken about but never documented at the Kamloops Indian Residential School."

She said it’s believed the deaths are undocumented, although a local museum archivist is working with the Royal British Columbia Museum to see if any records of the deaths can be found.

Some of the children were as young as three, she said.

The school was once the largest in Canada’s residential school system.

"Given the size of the school, with up to 500 students registered and attending at any one time, we understand that this confirmed loss affects First Nations communities across British Columbia and beyond," Casimir said in the release.

The chief said work to identify the site was led by the First Nation's language and cultural department alongside ceremonial knowledge keepers, who made sure the work was done was in line with cultural protocols.

The leadership of the Tk’emlups community "acknowledges their responsibility to caretake for these lost children," Casimir said.

Access to the latest technology allows for a true accounting of the missing children and will hopefully bring some peace and closure to those lives lost, she said in the release.

The reclamation work was paid for by a Pathway to Healing provincial government grant, she said.

Casimir said band officials are informing community members and surrounding communities that had children who attended the school.

“This is the beginning but, given the nature of this news, we felt it important to share immediately,” she said.

The First Nations Health Authority called the discovery of the children's remains "extremely painful" and said in a website posting that it "will have a significant impact on the Tk’emlúps community and in the communities served by this residential school."

FNHL C.E.O. Richard Jock suggested the situation had the potential to affect First Nations people in BC and across the country.

"That this situation exists is sadly not a surprise and illustrates the damaging and lasting impacts that the residential school system continues to have on First Nations people, their families and communities," Jock wrote in his web post.

The FNHA said immediate supports for Tk’emlúps Nation have been identified through its Interior health team, and its teams are on standby to support further needs.

The agency said some of the supports currently available include the KUU-US Crisis Line, Tsow-Tun-Le-Lum Society and the Indian Residential Schools Survivors Society.

The Kamloops school operated between 1890 and 1969. The federal government took over the operation from the Catholic Church to operate as a day school until it closed in 1978.

The Truth and Reconciliation Commission issued its final report on residential schools more than five years ago. The nearly 4,000-page account details the harsh mistreatment inflicted on Indigenous children at the institutions, where at least 3,200 children died amid abuse and neglect.

This report by The Canadian Press was first published May 27, 2021.

Any comment on the subject of this article must be first prefaced with condolences and support for all first nations peoples across turtle island. The traumas of residential school are never very far below the surface, and the process of documenting the unthinkable must be very difficult for all.

Chief Rosanne Casimir’s poignant words that this is an "unthinkable loss that was spoken about but never documented at the Kamloops Indian Residential School” must ring true at all former residential school sights across Canada.

Perhaps an appropriate act of reconciliation by Canada would be to supply the resources to fund similar investigations at all former residential school sights across the country.

Also, I am sure the significance of posting a link to Sandy Garossino‘s excellent December 15th 2015 opinion piece, COLOUR BLIND: The Truth you still don't know about Reconciliation, was not lost on your editors. One of the principles at Kamloops Indian Residential School, the Reverend John Fergus O’Grady, later become Bishop of the Prince Rupert diocese… where among other roles… he was mentor to a young Frontier Apostolate missionary by the name of John Furlong.