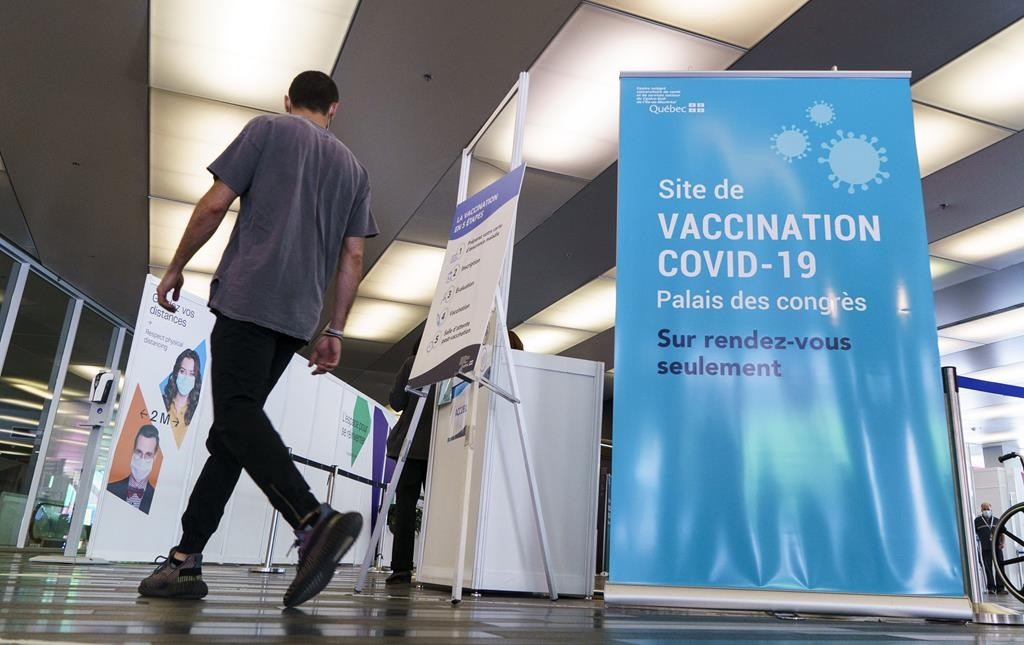 A man enters a COVID-19 vaccination clinic in Montreal, on Thursday, May 27, 2021. The Canadian Press/Paul Chiasson
Previous story
Next story

That caution extended to Ottawa's consideration of an expert report that recommends Ottawa scrap the hotel quarantine requirement for air travellers, with Tam saying the topic is under "active discussion" and that officials will address it in the near future.

Canada's top doctor was similarly careful in her assessment of Quebec's decision to lift curfews and reopen outdoor spaces such as outdoor patios Friday, allowing they were "not unreasonable" in light of regional epidemiology.

However, she warned that hasty reopenings could lead to "pockets of resurgences" among under-immunized populations.

"We've had a few experiences in the past that has led us to wanting to be more precautionary," said Tam.

The National Advisory Committee on Immunization recommended Friday that Canada turn toward the ultimate goal of fully immunizing the population, now that supplies of COVID-19 shots are increasing.

The panel said those at highest risk of dying or becoming severely ill should be prioritized for second shots, either after or alongside first doses for anyone else who is eligible for a vaccine.

Since the novel coronavirus is still circulating in Canada, NACI is still recommending that the second dose be received up to four months after the first dose, in order to maximize the number of people who get at least one shot.

"The 16-week interval was the upper limit and provinces and territories should aim to start administering second doses as quickly as regional logistics allows it," Dr. Caroline Quach said in a statement Friday.

"First doses have been a highly effective starting point from a population immunity perspective, and we now need to move towards our second doses to provide more complete long-term protection."

Meanwhile, new national modelling suggested the COVID-19 crisis has taken a turn for the better over the past month.

Tam said more than 22 million vaccine doses have been administered across the country and that Canada has crested the third wave.

Average case counts are now less than half of what they were during the peak of the third wave in mid-April, with fewer than 3,400 cases being reported daily over the past seven days, said Tam.

The number of people experiencing severe or critical illness is also decreasing, though at a slower pace, she added.

Federal health authorities were circumspect about whether the government will heed an expert panel's recommendation that Canada drop a requirement for air travellers to quarantine for three days in a government-approved hotel.

Global vaccination coverage is not very high at the moment, Tam noted, and officials must consider domestic levels of disease and immunity.

Hajdu added that the issue of international travel "is a delicate and contentious one" and any changes to border measures demand discussion with provincial counterparts.

"We want to make sure that we continue to protect Canadians' risk of importation of virus no matter what measures we have at the border," Hajdu said.

This report by The Canadian Press was first published May 28, 2021.