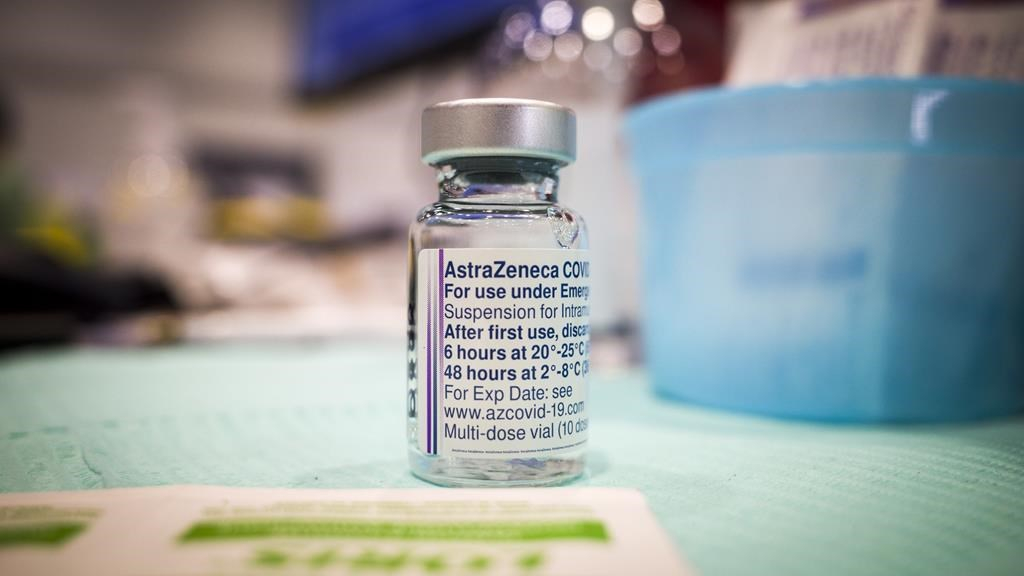 A vial of AstraZeneca vaccine is seen at a mass COVID-19 vaccination clinic in Calgary, Alta., on Thursday, April 22, 2021. File photo by The Canadian Press/Jeff McIntosh
Previous story
Next story

Preliminary results of an ongoing study in the United Kingdom suggest alternating the Oxford-AstraZeneca and Pfizer-BioNTech vaccines causes more frequent mild to moderate symptoms, but there are no other safety concerns from mixing those vaccines.

However, researchers at the University of Oxford have not yet determined how a combination of shots would affect the immune system's response compared with sticking with the same COVID-19 vaccine for both the prime and booster shots.

They say in a peer-reviewed letter published in The Lancet on Wednesday that an increase in short-term adverse reactions occurred after the Pfizer vaccine was followed four weeks later by AstraZeneca, or vice versa, as part of the study that began earlier this year.

"The results from this study suggest that mixed dose schedules could result in an increase in work absences the day after immunization, and this is important to consider when planning immunization of health-care workers," Snape said in a EurekAlert! statement issued by the service, which provides science-related releases.

Researchers also noted that while the study participants were aged 50 and over, it's possible that adverse reactions may be more prevalent in younger people, though they did not provide any details.

Results on whether immune response to mixed doses would be affected are expected to be released by the Oxford team in the coming months.

Snape said they've adapted the ongoing study to assess if early and regular use of acetaminophen in Tylenol, for example, reduced the frequency of fever and mild to moderate pain.

Research was expanded last month for a new study with 1,050 volunteers who received either the AstraZeneca or Pfizer vaccine before randomly getting either the same vaccine for their second dose or the Moderna or Novavax vaccine.

Horacio Bach, an infectious diseases expert at the University of British Columbia, said the small size of the initial study does not make it possible to know whether some people would get severe reactions from mixing the AstraZeneca and Pfizer vaccines.

AstraZeneca, for example, was tested in about 32,000 people but rare blood clots were not detected until millions of people received the vaccine, which a national vaccine panel in Canada has suggested should be sidelined in favour of the "preferred" Pfizer or Moderna vaccines.

Bach said it's possible that knowing about an increase in adverse reactions from mixing vaccines could deter some people from getting a second dose, though symptoms following vaccination from even the seasonal flu shot vary widely.

Three Canadians — in Alberta, New Brunswick and Quebec — have died from a rare blood clot associated with AstraZeneca.

On Wednesday, even as the federal government announced it's expecting to receive hundreds of thousands of doses of the vaccine, Nova Scotia and Manitoba said they would limit its use to second doses after similar restrictions on Tuesday in Alberta, Saskatchewan, Ontario and Quebec. Some of the provinces have used up their AstraZeneca supply.

B.C. Health Minister Adrian Dix said Wednesday the province is expecting to use some of its forthcoming supply of AstraZeneca for second doses and more doses had been distributed to pharmacies in the Island and Interior health regions.

This report by The Canadian Press was first published May 12, 2021.

The story appears to confuse

The story appears to confuse "reactions" a day after injection, mostly muscle aches, head aches, mild fever, and fatigue -- with the blood-clot issue, which is not related to the other reactions.

The Lancet letter does not mention blood clots in any way.

Further, this article could have mentioned the numbers, as the Guardian article did. The reaction-symptoms were reported in 10% of Ox/AZ recipients 21% of Pfizer recipients, and 34%, or 41% of mixed-dose recipients (higher if Ox/Az was the second), on that second dose.

Me, I got Ox/AZ for #1, am eager to try Pfizer as a second, in spite of this. We need more data on all of it, and it's not much discomfort to volunteer for. The possibility that it will confer improved immunity, through synergy, is a common finding with many vaccines. A few percent improvement in my COVID resistance is well worth a day on the couch, whining.