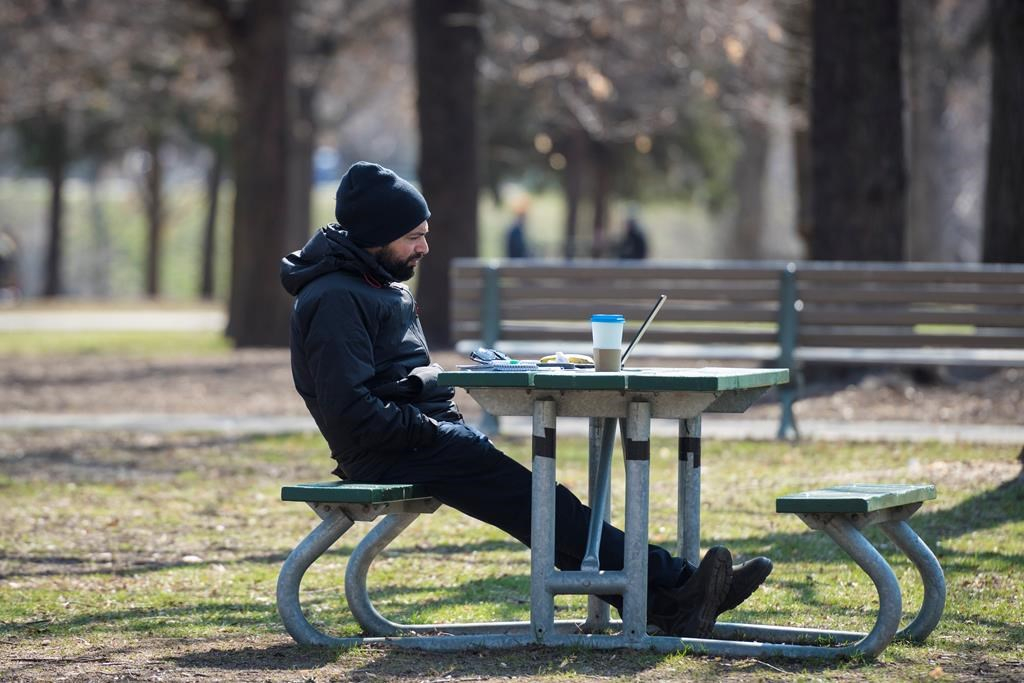 A man works on his laptop outside in Trinity Bellwoods Park in Toronto on Wednesday, April 7, 2021.Photo by: The Canadian Press/Tijana Martin
Previous story
Next story

Canadians are in no rush to head back to the office even as COVID-19 cases and deaths continue to decline across the country, a new survey suggests.

A recent poll by Leger and the Association for Canadian Studies has found that 82 per cent of Canadian respondents who have worked from home during the pandemic have found the experience to be very or somewhat positive, while just 20 per cent want to return to the office every day.

Only 17 per cent described working from home as somewhat or very negative.

Almost 60 per cent of those surveyed said they would prefer to return to the office part-time or occasionally, while 19 per cent said they never want to go back.

The top three reasons for preferring to continue to work from home were convenience, saving money and increased productivity.

Some 35 per cent of those surveyed in Canada agreed with the statement "If my superiors ordered me to go back to the office, I would start to look for another job where I can work from home."

The Leger survey queried 1,647 Canadians and 1,002 Americans between May 21 to 23, and cannot be assigned a margin of error because it was done online.

The data comes as several provinces have started easing pandemic restrictions as new cases and hospitalizations continue to come down from third-wave highs.

Saskatchewan entered the first phase of its reopening plan on Sunday, as it reported the fewest people in hospital with COVID-19 since Nov. 28.

Quebec, which reported 315 cases on Sunday, will ease restrictions in eight different regions on Monday.

The regions, which include Quebec City but not Montreal, will move from red to orange on the province's pandemic alert system, allowing gyms and restaurant dining rooms to reopen.

Newfoundland and Labrador, however, went in the other direction as it tightened restrictions in the western region in response to a growing COVID-19 cluster.

Dr. Rosann Seviour, provincial medical officer of health, announced restrictions were being increased in the region because of a number of cases with no identified source of infection.

As a result, Seviour said communities in the Stephenville area and on the Port au Port Peninsula were being moved to Alert Level 4 as of 4 p.m. Sunday, meaning people are advised to stay home as much as possible except to get essentials like groceries and medications.

In a statement, Canada's chief public health officer said that easing restrictions needs to be done gradually, especially given the risk presented by more contagious variants.

"As restrictions start to be lifted based on conditions in your area, it is still important that everyone continue to follow local public health advice and keep up with individual protective practices like physical distancing and wearing a mask regardless of whether you have been vaccinated or not," Dr. Theresa Tam wrote.

Ontario announced Sunday that it would move on Monday to replace Dr. David Williams, its chief medical officer of health.

While the province praised his leadership during the COVID-19 crisis, critics have taken aim at his rambling communication style and his failure to push stiffer restrictions ahead of a surge in COVID-19 cases earlier this year.

Health Minister Christine Elliott issued a statement saying the government would move a motion on Monday to replace Williams with Dr. Kieran Moore, who has drawn praise in his role as medical officer of health for Kingston, Frontenac and Lennox and Addington Public Health.

The proposed change would see Williams retire on June 25, a few months ahead of schedule, with Moore to take over the following day.

This report by The Canadian Press was first published May 30, 2021