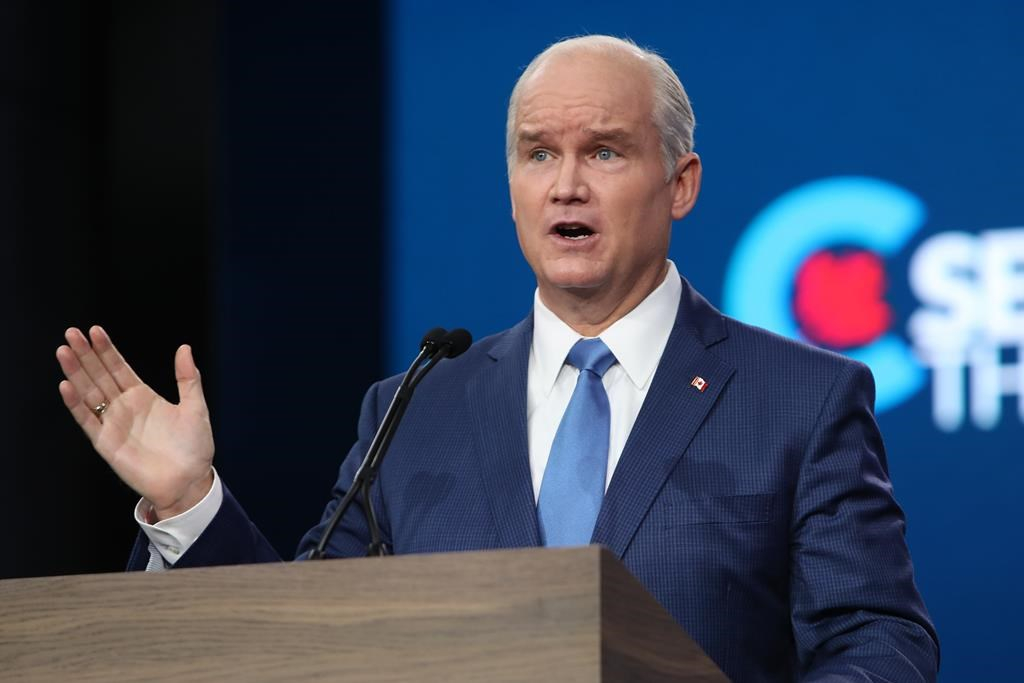 Conservative Party leader Erin O’Toole speaks at a press conference at the Westin Hotel in Ottawa on Thursday, June 17, 2021. Photo by The Canadian Press/David Kawai
Previous story
Next story

Erin O'Toole pulled Conservative MPs from a special national security committee Thursday, accusing the government of using it to cover up an incident that caused two scientists at Canada's highest security laboratory to be fired.

The Conservative leader told the House of Commons his party's members are withdrawing "effectively immediately" from the National Security and Intelligence Committee of Parliamentarians.

The committee "is now being used as a political tool by the prime minister to cover up the Winnipeg lab incident," O'Toole charged.

"Conservatives will never be complicit in the Liberal corruption."

But shortly thereafter, all opposition parties joined forces to pass a Conservative motion declaring that the Public Health Agency of Canada is in contempt of Parliament, having refused to obey a House order to produce unredacted documents related to the firing of scientists Xiangguo Qiu and her husband, Keding Cheng, in January.

The pair had been escorted out of Winnipeg's National Microbiology Laboratory in July 2019 over what PHAC has described as "relating to possible breaches in security protocols."

The motion also summons PHAC president Iain Stewart to appear before the bar of the House of Commons on Monday, to be admonished by the Speaker and to produce the documents.

Calling someone to the bar of the House is a rarely used procedure to essentially publicly shame a person who has committed "an offence against the dignity or authority of Parliament," according to House of Commons Procedure and Practice, third edition.

Since 1913, it has not been used against a private citizen, although it has been used twice, in 1991 and 2002, to discipline MPs who had grabbed the ceremonial mace during heated Commons proceedings.

Stewart and Hajdu have both said the scientists' firing had nothing to do with the fact that Qiu oversaw a shipment of Ebola and Henipah viruses to China's Wuhan Institute of Virology in March 2019.

They've also said there's no connection to COVID-19, a coronavirus that first appeared in China's Wuhan province and which some believe may have been released accidentally by the virology institute.

Nevertheless, opposition parties continue to suspect a link and are demanding to see unredacted documents about both the transfer of viruses to the Wuhan institute and the subsequent firings.

Stewart has twice refused to comply with a Canada-China relations committee order to produce those documents, saying federal Justice officials have advised him that would be a breach of privacy laws, could interfere in an ongoing police investigation and jeopardize national security.

Opposition parties joined forces earlier this month to pass a motion in the Commons ordering PHAC to turn over all unredacted documents to the parliamentary law clerk, who would confidentially review them and redact anything he felt would compromise national security or the ongoing police investigation.

It specified that the Canada-China relations committee, after consulting with the law clerk, could choose to make public any redacted material.

Instead, the minority Liberal government provided the unredacted documents to the all-party national security committee, whose members must have top security clearance and are bound to secrecy.

That committee, created in 2017 to review sensitive matters, submits classified reports to the prime minister, which are later tabled in Parliament in edited form.

Speaker Anthony Rota ruled Wednesday that it is not a committee of Parliament and, therefore, not an acceptable alternative to having a Commons committee examine the documents.

He further ruled that the Commons and its committees have unfettered power to order the production of documents, no matter how sensitive, and to determine how they're to be handled. Consequently, he found there's a prima facie case that the government has breached parliamentary privileges.

But Hajdu continued to argue Thursday that the national security committee is the "appropriate" body to examine the documents.

"Once again, we see Conservatives playing games with national security and on this side of the House we will never do that," she told the Commons.

O'Toole countered that the national security committee "is not allowed, by law, to review active investigations."

This report by The Canadian Press was first published June 17, 2021.

O'Toole accuses? That is all

O'Toole accuses? That is all it is, and if this was in any way current (2019) it might be a valid argument!