About one fifth of eligible Canadians now fully vaccinated 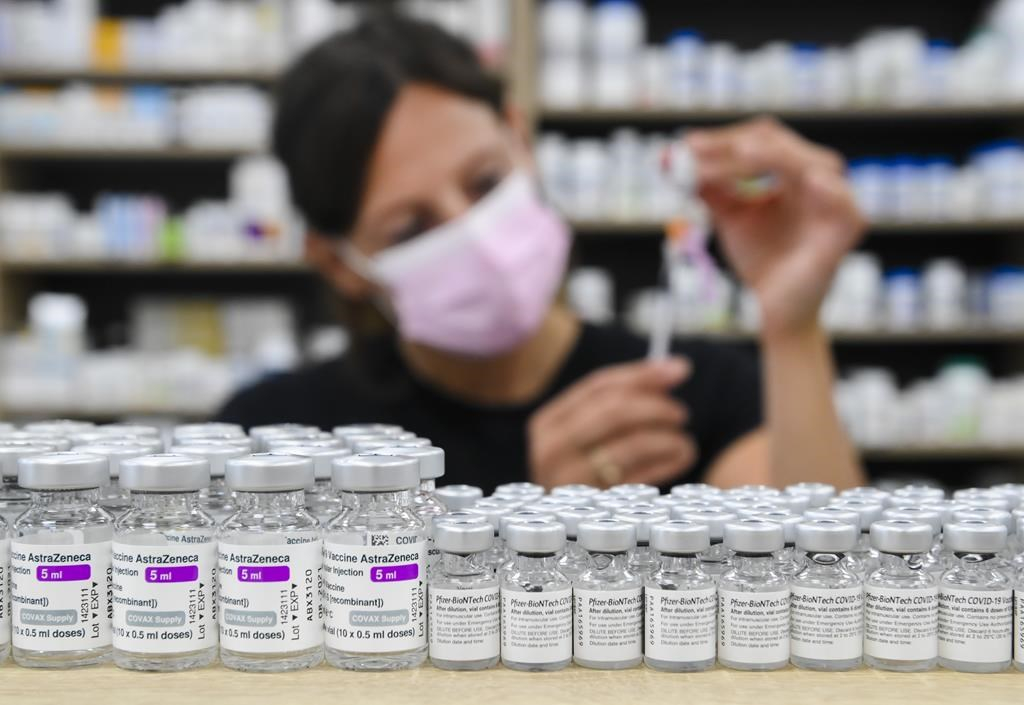 Barbara Violo, pharmacist and owner of The Junction Chemist Pharmacy, draws up a dose behind vials of both Pfizer-BioNTech and Oxford-AstraZeneca COVID-19 vaccines on the counter, in Toronto, on June 18, 2021. Photo by The Canadian Press/Nathan Denette
Previous story
Next story

Canada has hit two of the vaccination targets government officials have previously said were necessary for the easing of public health restrictions imposed due to COVID-19.

An independent website founded by a University of Saskatchewan student and tracking federal and provincial vaccine data says just over 20 per cent of eligible Canadians — those 12 years old and above — are now fully vaccinated.

And just over 75 per cent of eligible Canadians have received at least one dose of a COVID-19 vaccine.

Federal modelling completed in the spring suggested that if 75 per cent of eligible Canadians had at least one dose of a COVID-19 vaccine, and 20 per cent had two, provinces could safely begin easing restrictions on public movement without overwhelming hospitals again.

The modelling also suggested that when 75 per cent of eligible residents are fully vaccinated, officials could begin to loosen personal measures like physical distancing and wearing masks.

But chief public health officer Dr. Theresa Tam said those models didn't include the highly contagious Delta variant, which she said surged by 66 per cent over the past week.

In Toronto, the city is also reporting more than 75 per cent of its adult population has received a first dose, while more than 25 per cent has had a second jab.

The COVID-19 Tracker Canada website is run by volunteers and uses daily federal and provincial data.

It said more than 31.7 million doses of approved COVID-19 vaccines have been administered across Canada as of early Saturday afternoon.

This report by The Canadian Press was first published June 19, 2021.