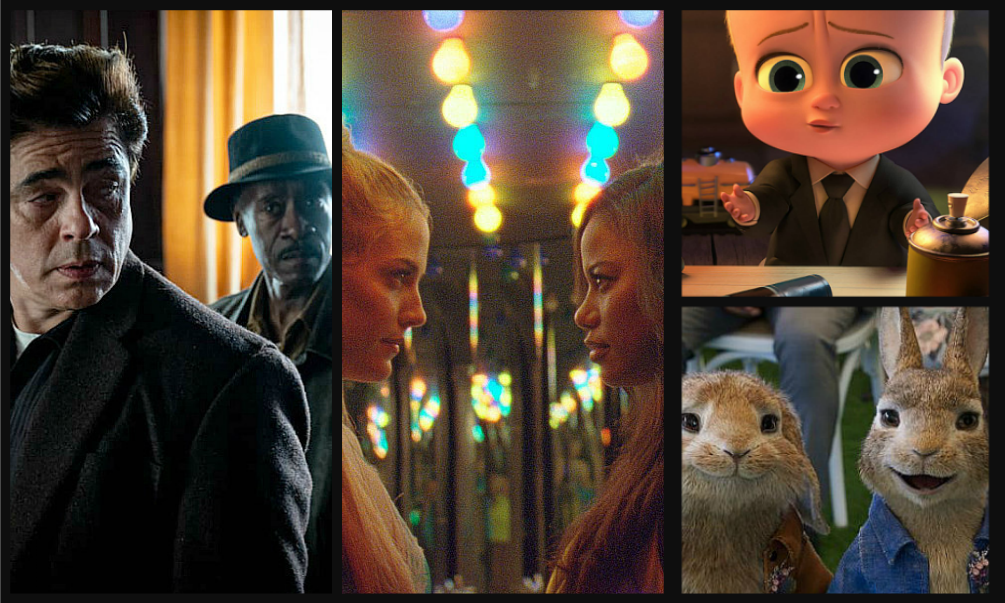 Your best choice this week is a film I recently gave 5 stars. Summer of Soul is a terrific compilation of great performances from a series of concerts in a New York park in 1969. Along with the tunes, one of which A.O. Scott in the New York Times called “the single most astounding duet I've ever heard, seen or felt” (that's Mahalia Jackson and Mavis Staples) there's commentary on what was going on in the US at the time. The film is now on Disney +.

Another one I liked a great deal, Shiva Baby, is coming to CRAVE starting Wednesday and whether in theater or streaming these are available now.

NO SUDDEN MOVE: Most of us started this pandemic time by watching Steven Soderbergh 's film about one, Contagion (2011), and here during the easing up he's the one to watch again. His new one is a crime caper about a heist that doesn't work out as planned but then piles on twists and puzzles as various characters try to figure out what happened, who was behind it and who had most to gain. You'll be very much caught up in this story even though it gets confusing a few times and a late-arriving social commentary theme is a bit too Chinatown-like. Still it's highly watchable . A solid cast is working here and Soderbergh has matched the look and feel of the best hard-boiled films of years past.

It's 1954, in Detroit. Three petty hoods (Don Cheadle, Benicio Del Toro and Kieran Culkin) are hired to force an auto executive to steal a secret ledger while they hold his family hostage. Problem: the book is already gone. Worse: all these characters have connections with people around them and with other shady guys, including Ray Liotta, Brendan Fraser, Bill Duke, Jon Hamm and Matt Damon, that complicate the plot immensely. Everybody's got an angle but who is doing what takes time to figure out. Corruption, organized crime, racism they all come up in Ed Solomon's terse and cynical script. “This country is re-landscaping itself,” says one man. True. (Showing on Crave) 4 out of 5

ZOLA: Attention aspiring writers. Here's a new path you could follow. A’Ziah King from Detroit wrote a long series of tweets detailing a trip she took with a friend starting with these ominous words: "Y’all wanna hear a story about why me & this bitch here fell out? It’s kind of long but full of suspense.” It grew into a sensation with readers and is now a movie. It's lurid, foul-mouthed, graphic and apparently authentic. Black women sex workers are said to be especially high on it because it depicts their world correctly. I can't confirm that, but the film does grab you (after a slow start because of its casual, street-wise style).

Zola, played by newcomer Taylour Paige, is a Detroit waitress and sometime pole dancer. Stefani played by Riley Keough is a customer, pole dancer and fast friend who invites her to come along on a trip to Florida where they can earn money with their dancing. A bad choice that turns out to be, because what they really get into is prostitution (much of it on display here), disputes with two men also on the trip, one of whom turns out to be a pimp, and a great big sinking into degradation. Violence is threatened; grubby scenes are portrayed. Bleak and funny co-exist. It's a very modern and jagged cautionary tale with fine acting by the two women. (International Village, 5th Avenue and 2 suburban theaters) 3 ½ out of 5

FEAR STREET PART 1: 1994: There are going to be three of these, premiering on Fridays, all based on novels by R. L Stine. He's a popular writer of horror fiction for adolescents and I'm a bit surprised to find this on Netflix. It's pretty strong for there, rated R. It's got bloody violence that moves up from knives to an axe. I'm not surprised to hear that the director, Leigh Janiak, is a big fan of the old Scream movies and has directed some of the recent TV revivals. I felt real similarities in this her new film.

The story is a modern gothic. The peaceful town of Shadyside is haunted. Every few years senseless murders are committed and a group of highshool teens finds an historical connection. A witch was killed three hundred years ago and now “local people turn into psychos”. There's a parallel contemporary story as the local teens are shunned by their counterparts in a rich neighboring town. There are many jump scares to startle you, creepy scenes like when the teens find the witch's grave in the woods and quite a bit of splatter. Also, a bizarre plan to defeat the witch by sacrificing and then reviving one of their own. It all comes at a good speedy pace. (Netflix) 3 out of 5

THE BOSS BABY: FAMILY BUSINESS: It's hard to disregard the half a billion dollars the original made, the Oscar nomination and Netflix series that followed and that's why we have this sequel. The first one was funny (my grandson particularly liked it) and as loosely as it was based on a children's picture book, it has prompted further story stretching here.

The two feuding brothers are now grown up. Tim (James Marsden) has a daughter (Ariana Greenblatt) who idolizes her uncle Ted (Alec Baldwin) and strives to bring the two men back together. There's a second daughter, baby Tina (Amy Sedaris) who is a double agent of sorts. This gets complicated. You see there's an elite school run by a progressive teacher (Jeff Goldblum) who is pushing his pupils hard into advanced education. He's taught them all computer coding for instance. Ultimately his plan is to do away with parents altogether. There's even a song that blames them for global warming. The ideas are mixed, at cross purposes at times , and the novelty isn't there anymore but there is fun for the kids, much of it like a sugar high with periods of hyper action. (International Village, Marine Gateway and many suburban theatres) 3 out of 5

PETER RABBIT 2: THE RUNAWAY: It was almost unannounced when it hopped into town a couple of weeks ago. Now it's going wide as a $25 PVOD rental and so it's time to catch up to it. A word of caution, though. If you thought the first one took liberties with the gentle charm of the Beatrix Potter story, watch out. It's now a typical Hollywood-like film. There's even a car chase and a whole lot of modern wisecracking humor.

Bea (Rose Byrne) and Thomas (Domhnall Gleeson) now have the baby she bore at the end of the first film. She's written her book, sells it in her shop and Peter (voiced by James Corden) is a local celebrity. That attracts a publisher from London (David Oyelowo) who wants to print a new version and sell it big. The same, he promises. “but more contemporary.” Peter would be called “Mischief maker”, or better yet, “The Bad Seed.” That offends Peter who runs off to London and gets in with a Fagin-like gang leader to pull off a heist at a farmer's market. Not for money. Dried fruit. In this re-imagining, director and co-scripter Will Gluck is doing exactly what Bea does not want: turning the story into a “sassy hipfest. Probably by an American.” The film jokes about that and goes ahead anyway in this fun but bordering-on insensitive updating of a small classic. (International Village, many suburban theaters and now PVOD) 2 ½ out of 5

THE HOLY GAME: This film takes us to an annual soccer tournament at The Vatican where seminarians from schools around the world compete in the Clericus Cup. They're studying to become priests and several spend a lot of time musing on why. “Giving your life to do good” is a common thought as is “sacrifice for the greater good” and “to grow as a person.” God is calling they say and doesn't want a sad priest. “God wants a happy priest.”

That's intercut with fleeting scenes of soccer, and a countdown through preliminary games to a final. We get to know a few of the players but get far more involved in their thoughts than their play. And scandal shows up too, both in what they think of the church's reputation and in a surprise actual development in the film. It's low-key, thoughtful and gracious but meandering. Brent Hodge, the filmaker is an Albertan who has worked in Victoria and Vancouver and is now based in Toronto. Before this he's dealt mostly with pop culture. (See it on CRAVE) 2 ½ out of 5

THE FOREVER PURGE: There's a valid message in this one, but I wonder if it'll get through to the people who need it. Let me explain. Guys with guns, guys who hate immigrants, including Mexicans, guys who rant about a “surge of migrants,” those are the people the film criticizes but the people who agree might not go to it and the people who do might not get the memo the same way. They might side with the militia-type self-professed patriots portrayed in it who assert that “America will be American once again” and “only pure-blooded Americans welcomed.”

Screenwriter James DeMonaco is terrified by these people. He's written five films and directed two of them about one night a year when all crimes are allowed. They've evolved to this: guys keeps purging after the alloted time. The tension gets extreme and especially strong statements are made about inequality, racism and jingoism. A characters talks about “the way the rich got rich on the backs of the poor ever since we robbed this land from the native Americans” and this: that the purge was started by “fat rich businessmen so they can play golf.” Not subtle, but you know what they're on about. Josh Lucas, Will Patton, Ana de la Reguera and Tenoch Huerta play some of the people caught up in this down near the border in Texas. ( International Village and many suburban theaters) 3 out of 5