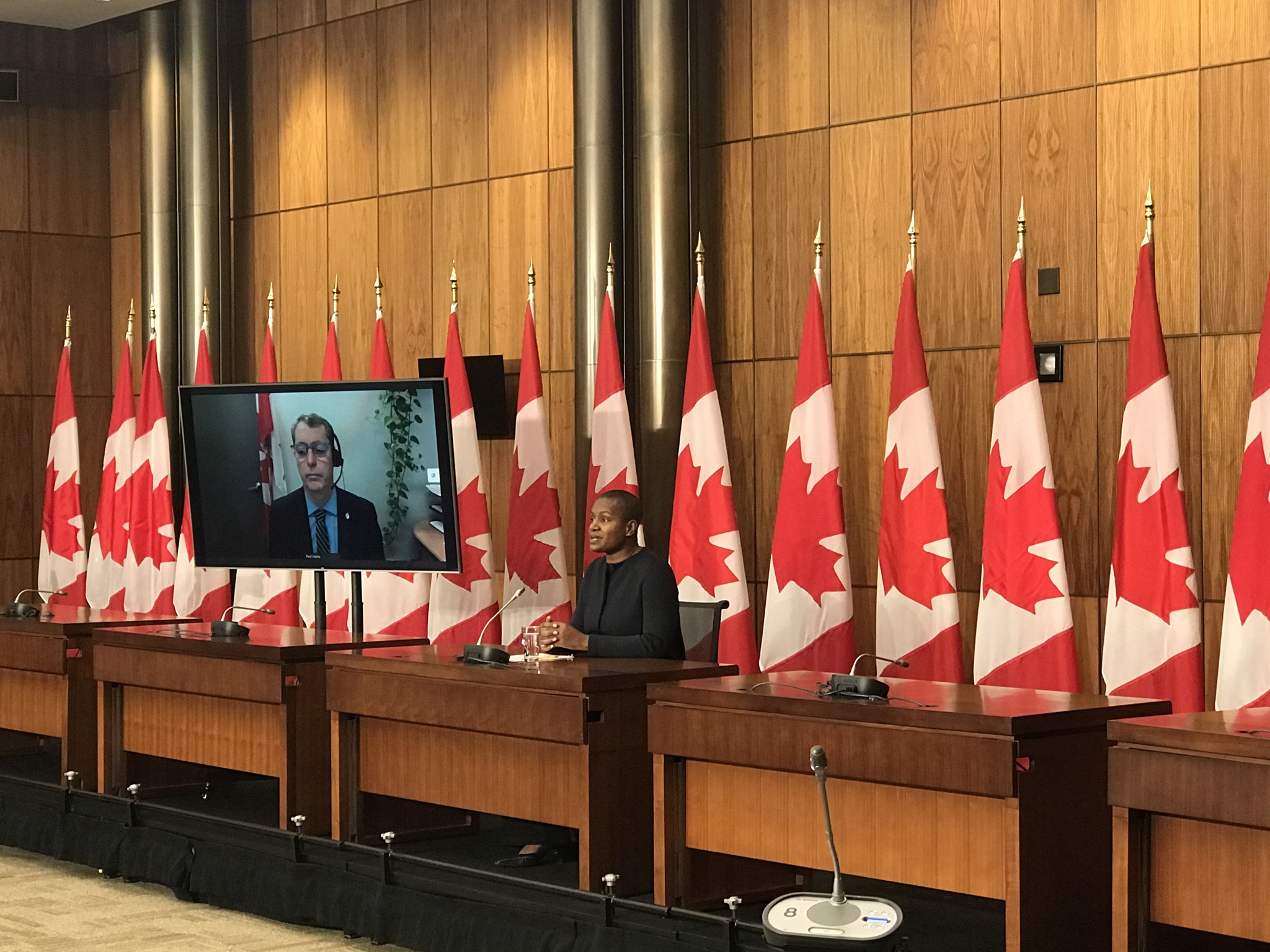 Annamie Paul speaks at a press conference about CERB, flanked by a virtual Paul Manly. Photo via Paul / Facebook
Previous story
Next story

Neither of the party’s elected MPs were named to the shadow cabinet. Instead, key posts like climate change, democratic reform, health, and others were handed to party members with professional backgrounds in those fields. Several other notable files have yet to be named. The shadow cabinet includes 15 people so far.

While many on social media were quick to brand the decision a snub to the party’s elected caucus, fuelling rumours about internal strife, Manly disagreed with that characterization.

“I didn't apply for shadow cabinet, because as an MP, I had nine critic portfolios, and so it doesn't make any sense for me to be focusing on just one of those as an adviser on policy to the party,” Manly said, adding he’d asked to be removed from the shadow cabinet “a long time ago.”

“I'm just happy we're getting a group of experts that are going to be able to help with research and advice, to work with caucus,” he said. “It would be awesome if we had an MP to cover every critic role for every government ministry, but we're not in that position yet, so having a shadow cabinet group of experts to deal with those different areas is perfect.”

Paul’s office declined an interview after Canada’s National Observer would not agree to limit questions exclusively to the shadow cabinet.

The announced shadow cabinet comes on the heels of months of public and behind the scenes infighting in the party. This week, it was revealed some staff members in Paul’s office would be laid off, and during a recent virtual staff meeting, Paul was reportedly muted by interim executive director Dana Taylor during a discussion about those staff cuts.

Sources told The Canadian Press the temporary layoffs take effect Friday evening and include no severance packages, meaning they could be asked to return to work if an election is called this year, with a refusal amounting to resignation.

The shadow cabinet also comes about a week after party president Liana Canton Cusmano told members the Federal Council would vote July 20 on whether to hold a vote of non-confidence on Paul’s leadership.

The “failure to meet her obligations as leader has caused the defection of a member of our caucus to another party, intangible damage to the party in the form of impairment to the party's reputation, cancelled memberships, reduced donations, and withdrawals of potential candidates for the upcoming general election,” Cusmano said, at the time.

On July 20, if at least 75 per cent of councillors supports a non-confidence vote, then Paul’s leadership will be put to a vote at a general members meeting Aug. 21. Previously, Paul was told she could avoid a non-confidence vote by publicly renouncing her former adviser Noah Zatzman, who accused unnamed Green MPs, understood to be former MP Jenica Atwin and Manly, of anti-semitism, but to date, she has not.

“(A) small group of rogue councillors, whose terms will expire in August, will not deter or distract me from the mandate I was given by our members last October, or the important work that they elected me to do,” Paul said late last month when Cusmano announced the Federal Council’s intention to hold a vote.

Green Party members across the country are running for spots on the Federal Council, with voting scheduled to begin July 12 running to August 11.

The Green Party Federal Council voting period has been corrected.

How gruesome will the Green

How gruesome will the Green Party's death throes be?

I really don't like anyone involved here. I'm not impressed by Paul (take for instance her careful avoidance of saying anything at all about the actual issue of Israel/Palestine that precipitated all this), but that council or whatever--canning a bunch of party staff while headed for an election and MUTING her, MUTING the party leader, when she had something to say about that?! The Green backroom types are unreal. And unprofessional. And maybe racist.

And I mean, it's obvious they

And I mean, it's obvious they just cut the staff to hamstring Paul. But who it's going to hurt is the Green party, which at this rate may go into the election too disorganized to even field candidates in a bunch of ridings.

YOU NEED TO MAKE A CORRECTION

YOU NEED TO MAKE A CORRECTION -- Voting for federal council members begins on July 12 and ends on August 11 at 3:00pm EDT.