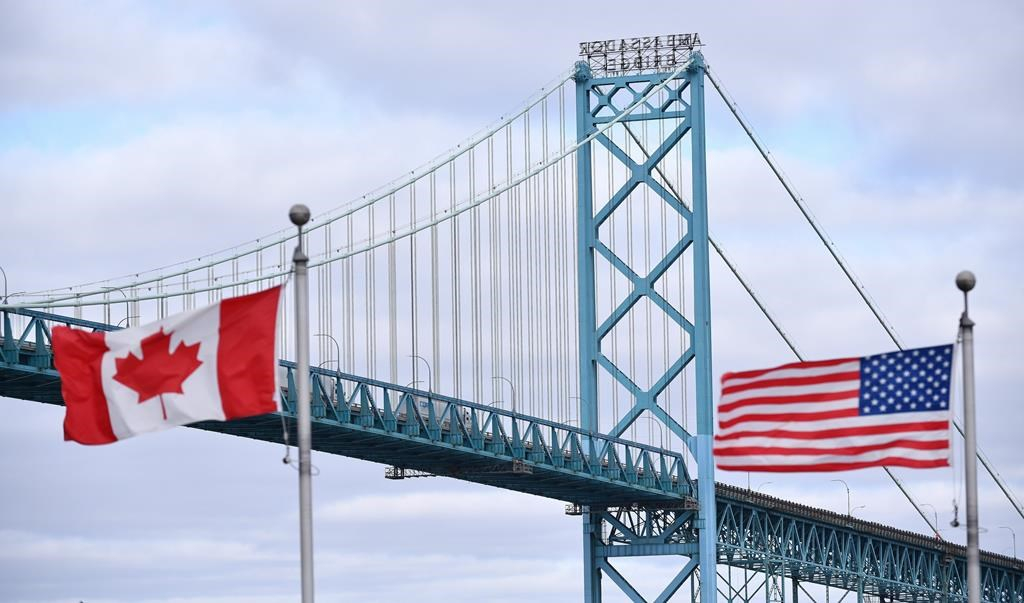 Canadian and American flags fly near the Ambassador Bridge at the Canada-USA border crossing in Windsor, Ont. on Saturday, March 21, 2020. File photo by The Canadian Press/Rob Gurdebeke
Previous story

Canada's bilateral overtures to fully vaccinated American visitors went unrequited Wednesday as the Department of Homeland Security formally extended its travel restrictions at the Canada-U.S. border for at least the next 30 days.

Officials at DHS specifically cited the rampant spread of the Delta variant of COVID-19 as part of their decision — which includes Mexico — and promised to keep talking with Canada, where vaccinated U.S. citizens and permanent residents will be welcome back as of Aug. 9.

The department "is in constant contact with Canadian and Mexican counterparts to identify the conditions under which restrictions may be eased safely and sustainably," they said in a statement.

The decision was widely expected; Public Safety Minister Bill Blair said as much Monday in announcing the latest stage in Canada's own plan to ease restrictions. Fully vaccinated Canadian citizens and permanent residents can already return; the rest of the world is to follow in September.

But the absence of suspense didn't seem to soften the blow for those U.S. lawmakers and travellers-turned-activists who vowed to step up the pressure on the White House to follow their northern neighbour's lead.

New York Rep. Brian Higgins, one of the loudest congressional critics to date of the border restrictions, called the U.S. reticence "incomprehensible" and "arbitrary" in light of what public health authorities are saying about the effectiveness of the COVID-19 vaccines.

"It flies in direct conflict with what all of us on both sides of the border have been told for the past 16 months, and that is, 'Follow the science,'" Higgins told a news conference.

Even with the Delta variant, fully vaccinated people "still have a very, very high level of immunity against giving COVID or getting COVID, and that has to be acknowledged."

"This continued border closure has a negative impact on our local economies and families," they wrote, "which is why we urge you to develop an immediate plan to allow vaccinated Canadians to resume travel to United States."

Border experts say the Biden administration is likely not ready to open the U.S.-Mexico border, given the existing refugee crisis there, and fears political blowback if travel from Canada is allowed a head start.

There's also the added element of whether or not the U.S., where only 57 per cent of eligible Americans have had a full course of a COVID-19 vaccine, will make proof of vaccination a condition of entry. The White House has already made clear it does not support requiring vaccination credentials in the U.S., a country famous for its fierce guardianship of personal liberties.

Higgins said he's at a loss to explain the decision: "I can't tell you what their thinking is unless and until they communicate it."

White House press secretary Jen Psaki, meanwhile, made it very clear Wednesday that whatever decision gets made, it won't be based on what Canada does.

"We rely on the guidance of our health and medical experts, not on the actions of other countries."

Advance notice from Homeland Security and U.S. Customs and Border Protection of the extension, published Wednesday in the Federal Register, acknowledged "positive developments" in the fight against COVID-19, particularly with regards to vaccination rates in both countries.

But it said Mayorkas had determined that the risk of travel-related transmission continues to pose a "specific threat to human life or national interests."

Allowing normal travel to resume "places the personnel staffing land ports of entry between the United States and Canada, as well as the individuals travelling through these ports of entry, at increased risk of exposure to the virus associated with COVID-19," it said.

The decision was met with anger north of the border as well.

The bilateral "road map" for a renewed cross-border partnership, issued by President Joe Biden and Prime Minister Justin Trudeau back in February, promised a science-based, co-ordinated approach to reopening the border, said Perrin Beatty, president and CEO of the Canadian Chamber of Commerce.

"Less than five months later, Washington appears to have lost its copy," Beatty said in a statement, noting the discrepancy in the U.S. approach: Americans can travel freely within their borders, and air travel from Canada to the U.S. remains unfettered.

"It's hard to see how allowing fully vaccinated Canadians to enter the U.S. poses a public health threat when travel within the U.S. is unrestricted."

NDP Leader Jagmeet Singh, who grew up in Windsor, Ont., just across the river from Detroit, said it's vital to follow the best public health guidance, but also to come up with a detailed and coherent plan — something he said has been missing from the discussion.

"There are many families where people have not been able to see their loved ones because they couldn't drive across the border for going on a year and a half," Singh told a news conference.

"This is important — that we get it right, and it's important that people can start to plan ahead."

A recent online poll, taken before the federal government's announcement Monday, suggests Americans are on Canada's side, even if Canadians themselves aren't quite as enthusiastic.

The poll, conducted last week by Leger for the Association for Canadian Studies, found that 74 per cent of 1,001 U.S. respondents supported fully reopening the borders by the end of August, compared with just 48 per cent of their 1,529 Canadian counterparts.

The polling industry's professional body, the Canadian Research Insights Council, says online surveys cannot be assigned a margin of error because they do not randomly sample the population.

John Adams, a Florida resident who owns a vacation property on Vancouver Island, has been crowdfunding a cross-border television and internet ad campaign against the two governments in recent weeks to convince them to lower the barriers.

Adams — calling the extension a "bonehead decision by the Biden administration" — said he's now setting his sights squarely on the White House with a new ad to be completed by the end of the week.

The ad accuses Biden of "holding Canadian citizens hostage" and acting out of fear, and warns of the risk of an economic recession if travel is not allowed to resume soon.