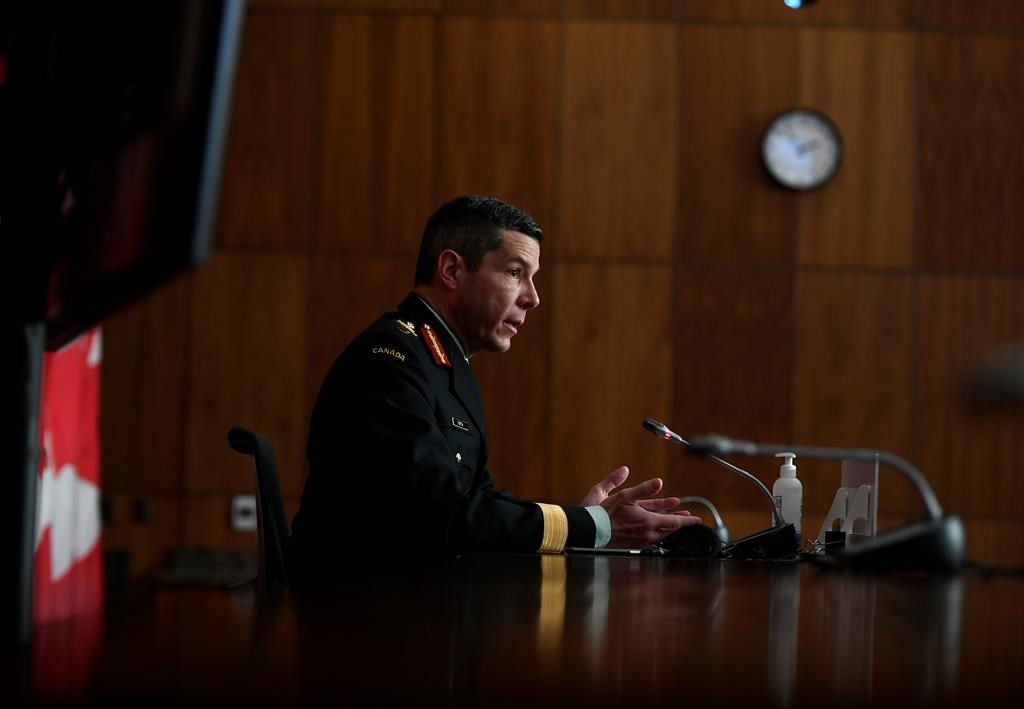 Maj.-Gen. Dany Fortin, vice-president of logistics and operations at the Public Health Agency of Canada, participates in a news conference on the COVID-19 pandemic in Ottawa, on Friday, Jan. 15, 2021. File photo by The Canadian Press/Justin Tang
Previous story
Next story

The military officer who previously oversaw Canada’s vaccine rollout campaign says his reputation has been “irreparably tarnished” by the government’s decision to abruptly replace him in May and publicly reveal he was being investigated for sexual misconduct.

Maj.-Gen. Dany Fortin's assertion is contained in an affidavit sworn last week but only publicly revealed on Thursday as part of his legal battle to reverse his dismissal from the Public Health Agency of Canada, which he alleges was improper and politically motivated.

Fortin was removed from the vaccine rollout on May 14, just five days before the Canadian Forces National Investigation Service referred a sexual misconduct investigation to the Quebec prosecution service to determine whether criminal charges should be laid.

Through his lawyers, Fortin has denied any wrongdoing.

Fortin’s lawyers filed an application last month with the Federal Court seeking an expedited judicial review of the decision to fire him from his posting at PHAC, and asking for the decision be quashed and for his reinstatement at the agency or another position.

In the affidavit sworn on July 13, Fortin says the impact of the decision to remove him and reveal the misconduct investigation “on my reputation and career has been devastating.”

Fortin says he received an exemplary performance review only three days before he was removed from the vaccine campaign, and was “at the peak of my career,” with expectations of a promotion or other opportunity upon finishing his job with PHAC.

Due to the decision to remove him, however, “I have no assignment, although I remain a member of the CAF. As far as I know, I am not being considered for any positions and I appear to have been bypassed for promotion. Currently, my career appears to be over.”

Fortin also took issue with the government’s decision to reveal the investigation into his conduct.

“The reputation I have built up over the course of three decades of service to my country has been irreparably tarnished by the decision to announce publicly an investigation into my alleged conduct,” the affidavit reads, “exacerbated by the fact that the announcement lacked the context that the investigation relates to a single allegation of misconduct dating back over 30 years.”

#DanyFortin says 'career appears to be over' after misconduct investigation revealed. #Military

Fortin's lawyer Natalia Rodriguez said the affidavit has been sworn and served to Attorney General David Lametti, but will not be filed in court until September.

"We are providing it to you ahead of schedule in the interests of openness and transparency," she said in an email. "We understand there is significant public interest in this case and we want to provide the public with as much information as we can with respect to the issues raised in this application."

Asked to comment Thursday, Defence Minister Harjit Sajjan’s spokesman Daniel Minden said: “As this is an ongoing legal matter, it would be inappropriate for us to comment at this time.”

None of the allegations has been tested in court.

They have also argued the announcement of his termination breached his right to keep his personal information private and fuelled public speculation without the appropriate context, causing irreparable harm to his reputation.

Fortin in his affidavit repeats many of the assertions made by his lawyers in last month's application for judicial review.

He says he first heard about an unspecified allegation of sexual misconduct against him on March 17, when acting chief of the defence staff Lt.-Gen. Wayne Eyre informed him that military police had launched an investigation.

Later the same day, after informing the Privy Council Office about the investigation, Eyre told Fortin he would “advocate for due process, the presumption of innocence” and for allowing Fortin to continue working on the vaccine rollout.

PHAC president Iain Stewart said much the same, according to the affidavit. But while Fortin’s posting was “OK for now,” Stewart also warned him Hajdu and Trudeau “may change their minds later” and that he should prepare himself “for the moment when they determine that you need to be let go.”

On April 19, Fortin says he received a call from a military police investigator who told him he was being investigated for one instance of sexual misconduct, alleged to have occurred more than 30 years ago.

On May 13, Fortin says Eyre told him that Hajdu and Sajjan “wanted to remove me” from the vaccine rollout. Eyre did not say what had prompted the decision other than to tell Fortin that “the ‘political calculus’ had changed and that the PCO had said I would have to be removed,” the affidavit says.

The following day, Fortin says Eyre presented him with a written statement regarding his departure “pending the results of a military investigation.” The statement was “not negotiable” other than giving Fortin the option of saying he had chosen to leave his assignment with PHAC.

The statement was released later that day while Sajjan released a separate statement which he prefaced by reiterating the government’s commitment to building a “culture of inclusion” in the military that “sheds toxic and outdated values, practices and policies.”

“I was not asked whether I consented to these public statements being made,” he added.

Five days after Fortin departed, the military police issued a statement saying an allegation of sexual misconduct was being referred to Quebec’s director of criminal prosecutions. Fortin says he only learned about that development through the media.

This report by The Canadian Press was first published July 22, 2021.