Could retrofitting dams for hydro provide a jolt for green energy? 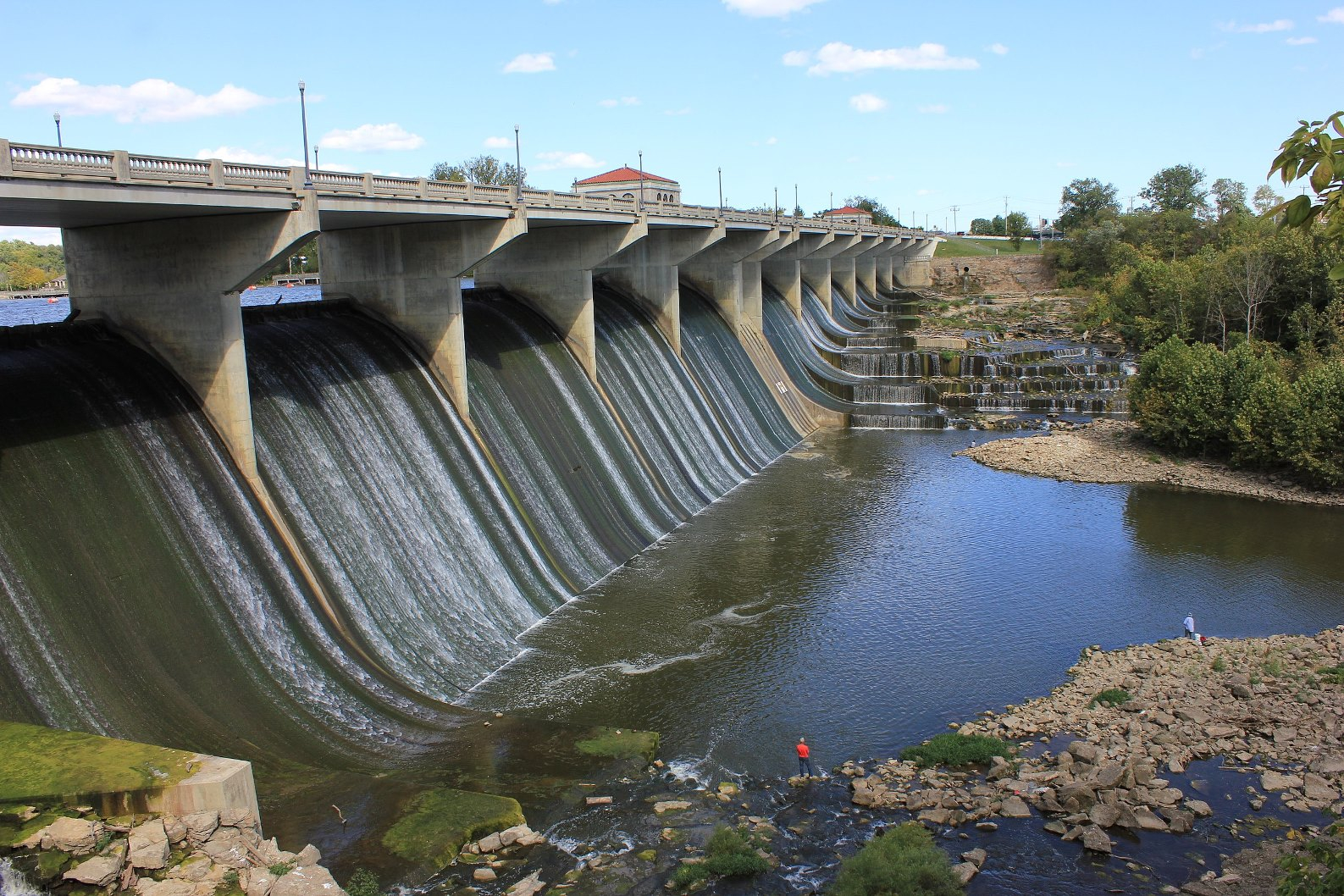 The O'Shaughnessy Dam in Ohio is being repaired and will be providing power to the city of Columbus by mid-2023. Photo by Delawareohiohistory / WikiMedia Commons (CC BY-SA 3.0)
Previous story
Next story

In 1969, the U.S. Army Corps of Engineers finished construction of the Red Rock Dam on the Des Moines River in Marion County, Iowa. One of thousands of U.S. dams built that decade, its purpose was to moderate seasonal flooding, allowing the Corps to release the million-and-a-half acre feet of snowmelt it impounded each spring at will. And for more than 50 years, aside from providing locals with a reservoir in which to fish and go boating, that’s all it did.

That changed last fall when engineers let water rush into two penstocks freshly punched through the concrete structure of the dam. Flowing into a powerhouse below, the water spun two hydroelectric turbines before pouring back into the river, generating enough electricity to power more than 18,000 homes in Iowa, Minnesota, and North and South Dakota.

More than a decade in the making, the Red Rock project is the latest of 36 U.S. dams retrofitted to generate hydropower since 2000, representing more than 500 megawatts of renewable generation capacity. That’s just a fraction of the 33,000 megawatts of solar and wind energy capacity the United States added in 2020 alone. But these retrofits have been the primary source of hydropower development in the U.S. since the end of the dam-building booms of the 20th century. And with ambitious targets from states and the federal government to decarbonize much of the grid by 2035 to avoid the worst effects of climate change, hydropower and environmental advocates say retrofitting dams presents an opportunity to leverage existing infrastructure for renewable energy while avoiding the environmentally destructive impacts of new dams on rivers.

“The era of building big dams is essentially over,” said LeRoy Coleman, a spokesperson for the National Hydropower Association, an industry group. “So our focus as the industry is … to develop on what’s out there.”

As of January, 88 projects to retrofit non-powered dams were in the Federal Energy Regulatory Commission’s (FERC) hydropower development pipeline, mainly on locks and dams on the Ohio and Mississippi rivers. There were also more than 100 proposed projects to add electricity generation to canals and other conduits, as well as to upgrade existing hydropower facilities, together representing nearly 1,500 megawatts of new hydropower capacity. Some projects are set to break ground as early as spring 2022.

Broad political support exists for retrofitting existing dams, with incentives for retrofits included in several multibillion-dollar federal bills designed to overhaul the country’s aging dam infrastructure. These bipartisan proposals, currently caught up in Congress’s larger infrastructure deliberations, were shaped and are supported by an unlikely alliance between the hydropower industry and environmental groups, with the aim of retrofitting, rehabilitating and removing dams. Supporters of the legislation say climate change and worsening drought in the western U.S. lends urgency to the proposals, with unpredictable flows impacting hydropower generation and stressing old dams.

For environmentalists, who have historically viewed new hydropower development as anathema, retrofits offer a workaround, a way of harnessing water to generate power without adding to the immense harm many dams have inflicted on river ecosystems and communities. But that doesn’t mean they think every dam should be retrofitted, said Brian Graber, who directs river restoration at American Rivers, a non-profit that advocates for dam removal and supports the new legislation. “We want those incentives to be appropriate to help retrofit those dams that ought to be retrofitted, and otherwise help remove dams that ought to be removed,” he said.

Of the more than 90,000 dams in the United States, only about 2,500 generate power, providing about seven per cent of all U.S. electricity and 38 per cent of electricity from renewable sources. The rest, built for purposes ranging from irrigation to flood control to navigation, are known as non-powered dams. “That says two things,” said Shannon Ames, who leads the Low Impact Hydro Institute, a non-profit that assesses the environmental impacts of hydropower projects. “One, there’s potential for more hydropower at existing dams. And two, there is no need to build a new dam.”

While most of these non-powered dams don’t store enough water or are too remote to be suitable for hydropower development, thousands could be retrofitted to generate electricity, according to the U.S. Department of Energy (DOE). In a 2016 report, the agency found that retrofitting existing dams could add as much as 12,000 megawatts of generation capacity to the grid, though only 4,800 megawatts — enough to power more than two million homes — would be economically feasible to build by 2050. These retrofits, Coleman said, represent billions of dollars of potential investment and thousands of jobs.

Other possible lanes for hydropower development laid out in the DOE report include a handful of gigawatts from upgrading existing hydropower facilities, retrofitting canals and conduits, and limited development of new dams. The report cited the potential for more than 30 gigawatts of pumped storage hydro — a method of energy storage in which surplus power is used to pump water to an upper reservoir, which is then released through a hydroelectric turbine when the power is needed. Taken together, these 50 or so gigawatts of hydropower would increase current hydropower generation capacity by half.

In addition to cutting into fossil fuel’s share of electricity generation, adding more hydropower could benefit the grid in other ways, said Tim Welch, who manages the hydropower program at the DOE. “Even small hydropower projects at non-powered dams — 10, 15 megawatts or even less — can play a role in regulating the grid” and making it more resilient, he said. This includes providing “black start” capabilities to restore energy to the grid after a blackout, or by backing up intermittent wind and solar resources. Pumped storage hydro, which currently provides more than 90 per cent of total energy storage in the U.S., could be especially significant for firming up an increasingly variable grid.

“(Hydropower) is unique among renewables because it pretty much is a 24/7 resource,” Ames said. “Aside from seasonal fluctuations, and of course droughts that come along, water flows in a pretty consistent manner.”

Unless, of course, it doesn’t. “There are lots of questions about reliable flow all over the world” with climate change altering patterns of rainfall and drought, said Yadu Pokhrel, an engineer who studies sustainable hydropower at Michigan State University. For instance, the Environmental Information Agency projects the intense drought currently withering the western U.S. will reduce California’s substantial hydropower output by nearly 20 per cent this year.

Even past forecasting of electricity generation by hydropower retrofits has proven to be overly optimistic; one study of the 36 retrofits completed in the U.S. over the past two decades found that actual generation was overestimated by 3.6 times on average. Welch said the DOE is investing heavily in better forecasting to improve hydropower projects’ ability to plan for drought and other extreme weather. An unpredictable climate’s impact on hydropower generation, he said, is “absolutely” a concern.

Though not all the retrofit projects seeking licences with FERC will get built, many are moving forward. For instance, Boston-based Rye Development, backed by the investment firm Climate Adaptive Infrastructure, has obtained licences for more than $750 million of retrofits on 22 dams, representing 250 megawatts of generation capacity — enough to power about 125,000 homes. Construction on the first three projects — all Army Corps-run locks and dams on the Ohio and Allegheny Rivers — will start in spring of 2022.

“The days of a 2,500-megawatt coal plant are probably passed,” said Paul Jacobs, Rye Development’s CEO. “So, we’ve got to think about how to replace those creatively. And this is one component that can play a big part of that.” He added that the degree of state and federal support for decarbonizing the grid is the biggest factor determining how many retrofits will actually be built. Many retrofits can pay for themselves, but tax incentives and streamlining the licensing process would make even more projects viable, he said.

At this point, federal support for the so-called “three R’s” — rehabilitate, retrofit and remove — looks promising. This month, Democratic Congresswoman Annie Kuster of New Hampshire introduced, with bipartisan support, a $25.8 billion bill called the 21st Century Dams Act. The bill would expand funding and offer incentives to retrofit and upgrade dams for hydropower, as well as increase funding for dam rehabilitation. It would also offer new incentives and grants to remove 1,000 dams to reconnect 10,000 miles of fragmented river ecosystems.

The $1.2-trillion bipartisan infrastructure package currently before Congress also includes a pared-down, $2.3-billion version of the Kuster plan, though that is “greatly reduced from the number we feel is needed to have a transformational effect,” said Graber of American Rivers.

In general, retrofitting existing dams has negligible environmental impacts compared to building a new dam, the negative environmental and social consequences of which are well-documented. Dams can fragment ecosystems, limiting species’ ability to move up and down rivers. The reservoirs behind them can flood communities and culturally significant sites. Dams can become liabilities to owners and hazards to communities downstream as they age and require repairs. They can even be a source of greenhouse gas emissions, as plant matter inundated in reservoirs rots, releasing methane and other greenhouse gases.

Nonetheless, conservation groups see a role for hydropower in rapidly decarbonizing the grid, Graber said. “It’s currently a significant energy source and is going to continue to have that role,” he said. “And we want to make sure that operations are being managed in an environmentally friendly way.”

Retrofitting fits into that vision, said Ames of the Low Impact Hydro Institute, especially when the retrofit doesn’t involve altering the flow of a river. Retrofits can also help with dam maintenance: “A failing, leaking dam does not help with power production,” Ames said. “It’s better to have a dam that’s in shape.”

But there’s one key caveat, Graber said: “We want to make sure those dams that are retrofitted are the dams that are also providing some critical function, things like water supply or flood control, or that they are dams that will produce a meaningful amount of power.” That is, before giving a dam a new reason to exist by adding hydropower, make sure it really has to be there.