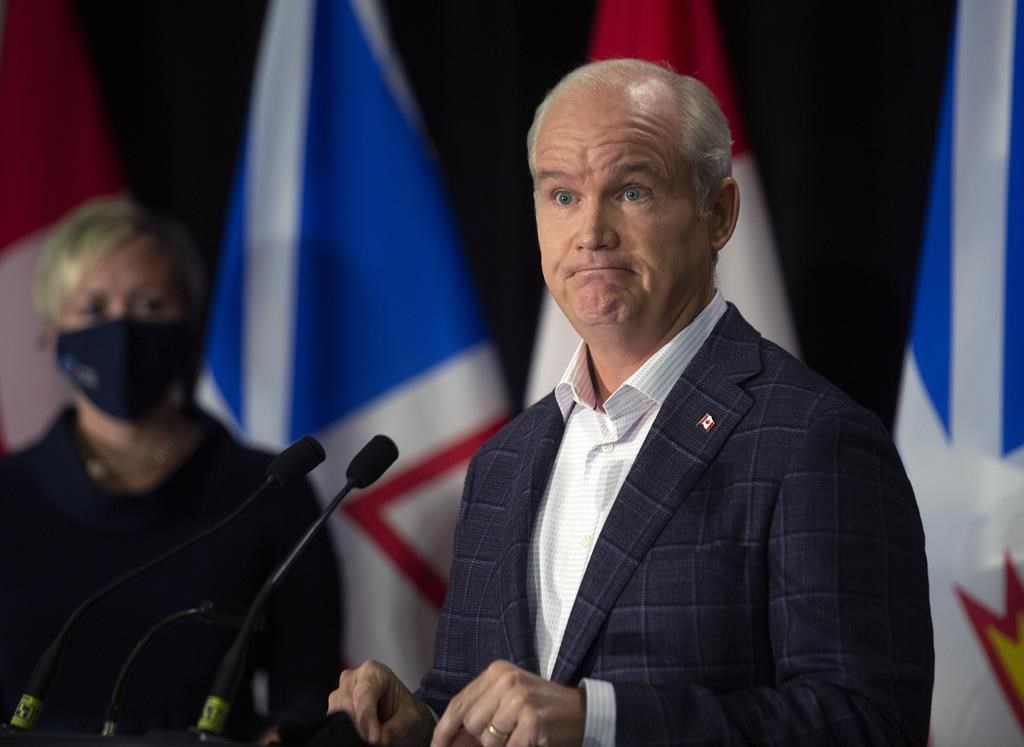 OTTAWA — Federal Conservative Leader Erin O'Toole accused Beijing of using the death penalty for political purposes on Tuesday after a Chinese court upheld the sentence of a Canadian sentenced to death in a drug case.

O'Toole also reopened the door to a Canadian boycott of next year's Winter Olympics in China, warning the Chinese government's recent actions show Canadians are not safe in the country.

“I know how hard our athletes are training for Beijing,” the Conservative leader said during a news conference in Oakville, Ont. “But we are approaching a point where it won't be safe for Canadians, including Olympic athletes, to travel to China.”

O’Toole’s comments came hours after the Higher People’s Court of Liaoning province in the northeast rejected an appeal by Robert Schellenberg, whose 15-year prison term on drug smuggling charges was increased to death in January 2019.

That followed the December 2018 arrest of Huawei Technologies Ltd. executive Meng Michael Kovrig in Vancouver on U.S. charges of lying to the Hong Kong arm of the British bank HSBC about possible dealings with Iran in violation of trade sanctions.

Meng’s lawyers argue the case against the Huawei chief financial officer is politically motivated and what she is accused of isn’t a crime in Canada.

China’s government has criticized the arrest as part of U.S. efforts to hamper its technology development. Huawei, a maker of network equipment and smartphones, is China’s first global tech brand and is at the centre of U.S.-Chinese tension over technology and security.

Canada's federal government criticized Tuesday’s ruling upholding the death penalty for Schellenberg as arbitrary and the penalty as “cruel and inhumane.”

“We condemn the verdict in the strongest possible terms and call on China to grant Robert clemency,” Ambassador Dominic Barton told reporters by phone after attending the appeals hearing in Shenyang, about 20 kilometres west of Dandong.

#China is playing politics by handing the #deathpenalty to a Canadian convicted in a drug case, says #CPC leader Erin O'Toole. #cdnpoli

“We have repeatedly expressed to China our firm opposition to this cruel and inhumane punishment and will continue to engage with Chinese officials at the highest levels to grant clemency to Mr. Schellenberg," Garneau said in a statement Tuesday.

“We oppose the death penalty in all cases, and condemn the arbitrary nature of Mr. Schellenberg’s sentence."

Schellenberg was convicted of smuggling 222 kilograms of methamphetamine, according to the court.

O’Toole, who has been pressing Prime Minister Justin Trudeau’s Liberal government to take a harder line with Beijing, wasted no time on Tuesday criticizing the Chinese court’s rejection of Schellenberg’s appeal.

He went on to say that Canadians would be watching as a different Chinese court is expected to release its verdict in Spavor’s case on Wednesday, even as a Vancouver court prepares to hear final arguments on whether Meng should be handed over to U.S. authorities.

“We're proud of our athletes we're celebrating,” O'Toole said. “But we also have to recognize the actions of a country that wants to host the Games to bring people together. And we will have to think long and hard on whether we reward a country like that with the Games.”

NDP Leader Jagmeet Singh said, without offering specific details, that Canada needs to use every resource available to save Schellenberg, Spavor and Kovrig.

"This is a Canadian, we need to save his life," Singh said of Schellenberg. "And we also know that Mr. Spavor and Mr. Kovrig are still detained and we need to do everything possible to secure their release. Canadians expect us to do that."

Canada and other governments including Australia and the Philippines face growing Chinese pressure including trade boycotts in disputes over human rights, the coronavirus and territorial claims.

Washington has warned Americans they face "a heightened risk of arbitrary detention” in China for reasons other than to enforce the law.

Asked whether the Schellenberg, Spavor and Kovrig cases were linked to Meng’s, Barton said, “I don’t think it’s a coincidence these are happening right now while events are going on in Vancouver.” He said the case was “part of the geopolitical process.”

He said Canadian diplomats talked with Schellenberg after the ruling but declined to give details.

“He is remarkably composed,” Barton said. “We had a good conversation.”

Diplomats from the United States, Germany, Australia and France attended Tuesday’s hearing, according to Barton. He expressed thanks to them and other governments for expressing support for Canada.

Two other Canadians, Fan Wei and Xu Weihong, also were sentenced to death on drug charges in separate cases in 2019 as relations between Beijing and Ottawa soured.

The Chinese government needs to understand that it cannot arbitrarily pass sentence on other nationals, no matter their crime. We must actively support a boycott of Chinese goods. Please research the sources of all commodities you purchase and decide whether you truly need them if the only source is a totalitarian state thousands of kilometers away.

I cannot include concerns for

I cannot include concerns for the person sentenced for drug smuggling in the extradition case. He apparently has a record of previous such offenses. It cannot be Canada's decision to determine what punishments are delivered under the laws of countries other than our own. China in turn cannot determine what punishments should be meted out in our country. This case is not linked to the fiasco that is the extradition case and should not be in the news as such. There should not be much political support for this one individual who apparently entered a foreign country whose laws are much more severe than ours and has been found guilty of breaking the law(s) of that country.