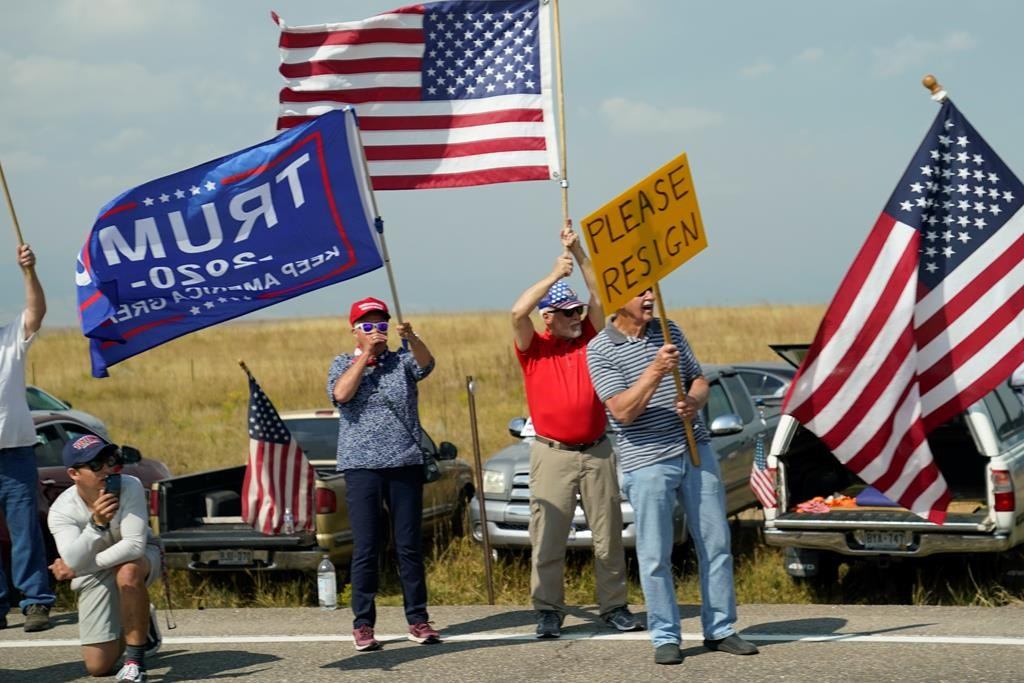 Protesters hold signs on the side of the road as seen through the window of a motorcade vehicle traveling with President Joe Biden to the Flatirons Campus of the NREL, on Sept. 14, 2021, in Arvanda, Colo. Photo by The Associated Press/Evan Vucci
Previous story
Next story

President Joe Biden tried to advance his domestic spending plans on Colorado on Tuesday by warning about climate change's dangers while highlighting how his clean-energy proposals would also create good-paying jobs.

The trip to the National Renewable Energy Laboratory's Flatirons Campus outside Denver capped the president’s two-day swing to the West, and offered Biden the chance to continue linking the need to pass his spending package to the urgent threat posed by climate change.

“Here’s the good news: Something that is caused by humans can be solved by humans,” Biden said. He deemed the need for a clean-energy future an “economic imperative and a national security imperative” and said that there was no time to waste as the impact of climate change seems to grow more severe by the year.

Biden said that extreme weather events will cost more than $100 billion in damages this year and underscored his goal to reach net zero emissions by 2050 while using solely carbon pollution-free power 15 years earlier.

“We can do that, we can do all of this in a way that creates good jobs, lowers costs to consumers and businesses and makes us global leaders," the president said.

Biden spoke about “more jobs for the economy” on an earlier tour as he checked out a giant windmill blade on the ground outside the lab and got a demonstration of wind turbine technology.

And, keenly aware of the delicate work underway back in Washington to craft details of his infrastructure-plus spending package, he gestured at Democratic legislators along for the tour and said, “They're the ones getting it all through Congress.”

Biden had spent Monday in Boise, Idaho, and Sacramento, California, receiving briefings on the devastating wildfire season and viewing the damage by the Caldor Fire to communities around Lake Tahoe.

“We can’t ignore the reality that these wildfires are being supercharged by climate change,” Biden said, noting that catastrophic weather doesn’t strike based on partisan ideology. “It isn’t about red or blue states. It’s about fires. Just fires.”

Throughout his trip, Biden held out the wildfires across the region as an argument for his $1.2 trillion bipartisan infrastructure bill and additional $3.5 trillion package of spending. The president said every dollar spent on “resilience” would save $6 in future costs. And he made the case that the rebuilding must go beyond simply restoring damaged systems and instead ensure communities can withstand such crises.

“In the end it’s not about red states or blue states. A drought or a fire doesn’t see a property line," Biden said. “It doesn’t care, give a damn for what party you belong to … yes, we face a crisis, but we face a crisis with unprecedented opportunity.”

The climate provisions in Biden’s plans include tax incentives for clean energy and electric vehicles, investments to transition the economy away from fossil fuels and toward renewable sources such as wind and solar power, and creation of a civilian climate corps.

Biden has set a goal of eliminating pollution from fossil fuel in the power sector by 2035 and from the U.S. economy overall by 2050.

The president’s two-day Western swing comes at a critical juncture for a central plank of his legislative agenda. Lawmakers on Capitol Hill are working to assemble details of the infrastructure-plus plan — and how to pay for it, a concern not just for Republicans.

With unified Republican opposition in Congress, Biden needs to overcome the skepticism of two key centrist Democrats in the closely divided Senate. Joe Manchin of West Virginia and Kyrsten Sinema of Arizona have expressed concerns about the size of the $3.5 trillion spending package.

In California, Biden appeared to respond to those concerned about the plan’s size, saying the cost “may be” as much as $3.5 trillion and would be spread out over 10 years, a period during which the economy is expected to grow. He also insisted that, when it comes to addressing climate change, “we have to think big.”

"Thinking small is a prescription for disaster,” he said.

The 100-member Senate is evenly split between Democrats and Republicans. Given solid GOP opposition, Biden’s plan cannot pass the Senate without Manchin's or Sinema’s support. The legislative push comes at a crucial time for Biden, who had seen his poll numbers tumble after the United States' tumultuous exit from Afghanistan and a rise in COVID-19 cases due to the highly contagious Delta variant.

U.S. could produce 40 per cent of electricity through solar by 2035