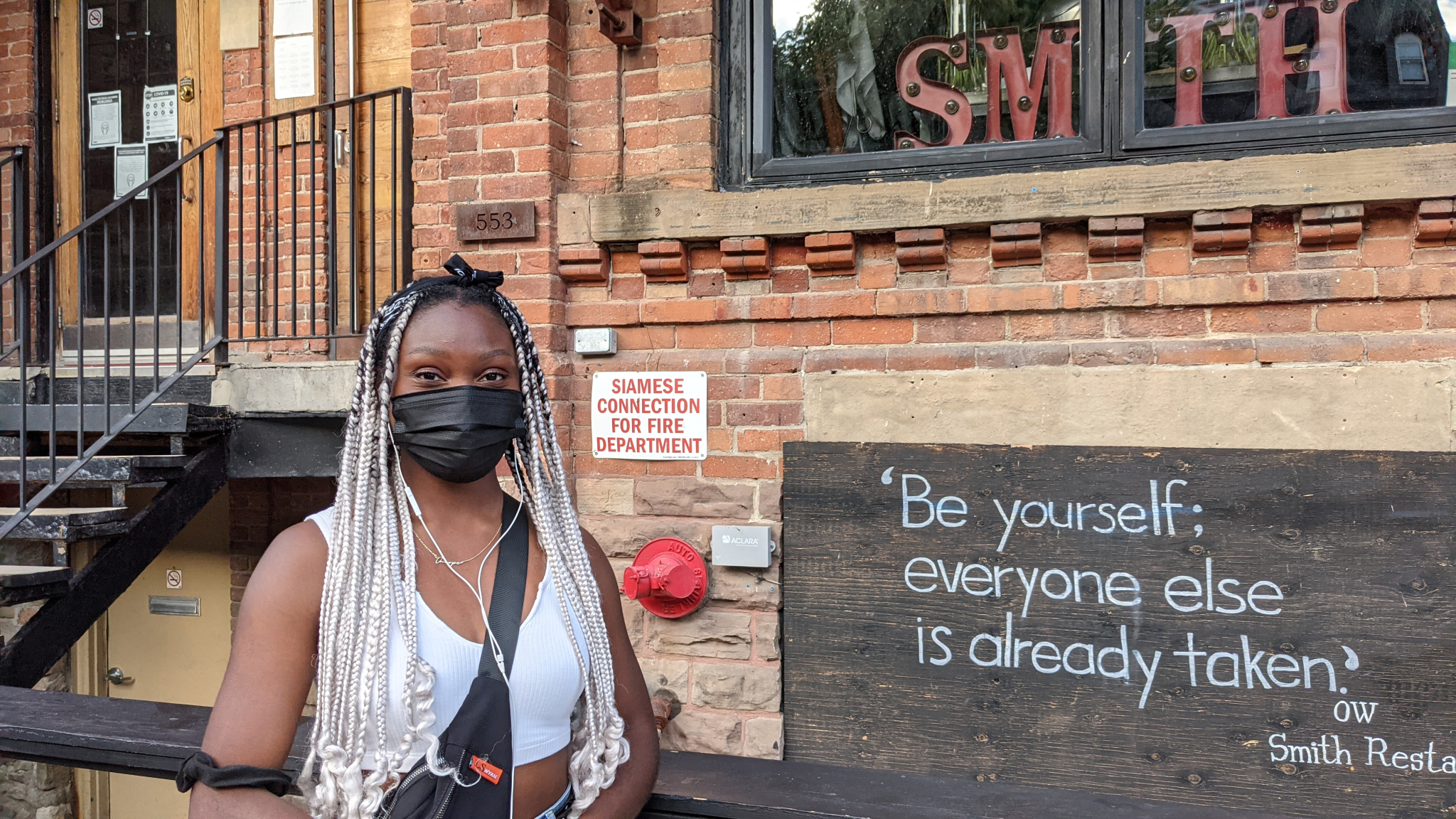 Onoape, 23, said the pandemic response and immigration are important issues in this election. Photo by Morgan Sharp
Previous story
Next story

Canadians went to the polls on Monday to decide whether to keep the Liberals in government or choose an alternative.

Here's what a handful of young voters waiting outside two polling stations in downtown Toronto had to say about what was compelling them to vote.

“Every election has different issues, obviously these ones are pertaining to the times, to the pandemic and immigration issues as well, and those are issues that are important to me, so I'm pretty excited to have a voice.”

“Just the way that the pandemic has been handled, obviously, to the best of its abilities and in comparison to other countries. And there are certain platforms that are just promoting, I'm not going to name any names, but certain platforms that are preaching more hate than acceptance, so I think that it's really important if you want to see a change or if you want to see a continuation of what you've been seeing, then it's important to be out here voting right now.”

“I'm excited to have a voice, everybody deserves to be heard. It's my first time voting and I just felt like I had to because I've got to stand up for what I believe in, and I just think that we're being pushed around.

Canadians went to the polls Monday to decide who will form the next federal government. Here's what a handful of young voters in downtown Toronto had to say about #elxn44

“All these politicians lie. Justin Trudeau, I'm going to have to drop that name bomb, but I'm just not a fan of what he's been doing to the country. Lots of his beliefs are very strong I guess, and I just have a different opinion...”

“Personally, for me, (the biggest issue) would probably be this whole mandating the vaccine and making it mandatory. My family members have got the vaccine and this and that, but the fact that my job can be threatened and my entertainment life, and all of the above, it just seems pretty narrowing and cutting everything off. You can't travel, you can't go to a restaurant, you can't go to a movie unless you've been vaccinated, and it just seems like what can you do then. You can go for a run, sure, but you can't go to a gym without being vaccinated. How does he expect these other people who don't want to be vaccinated to live like this? If he truly believes in equality, why are these people being treated so unequal?”

“I feel like the election caught most people by surprise, including myself, so I wouldn't say that I'm excited to be here, but I feel like we should be here as Canadians to vote.”

“The recovery after the pandemic, well we're still kind of in the pandemic, but looking forward how they're going to support families, all the people who lost their jobs, all the businesses that closed. It's a very different landscape now. And for me personally, climate change and how Canada is going to address that I think is a high-priority item.”

“I feel like people have taken those issues and extended them to be about human rights and freedoms, but I think that falls short of the bigger picture, that it's protecting the most vulnerable in our society. I don't like how it's been politicized, to be honest. It's a public health issue, not a political issue.”

“I think it was a little rushed. I wasn't exactly excited that it was called, but I am excited about the traction ... the NDP is getting. They've been getting significantly more traction now than they have been in the last few elections.

“I think they will make some good changes that are necessary to move forward as a country as a whole. For me particularly, it's the relationship with Indigenous communities and how they actually seem to want to make change going forward and pursue truth and reconciliation rather than brushing things under the rug, which I feel like has been happening for too long.

“A big issue for me also is the homelessness in Toronto, and they've talked a lot about getting more affordable housing in the city, affordable housing in general in Canada. It just happens to be a big issue here. I think that's something we need to be focusing on because it's not always the people's fault that they're homeless, it's usually just the world they live in, the society we live in that's made them go there.

“The climate crisis is so terrifying that I end up somehow just forgetting it because it's so constantly there. But I definitely think it's a big conversation point now and something we need to focus on.

“If we don't have a world to live in, then what's the point of all the other issues? So I'd say it's probably the biggest thing to take care of.”

“I've heard what some of the different parties, like the PPC ... have said about immigrants, and as someone who comes from an immigrant family, I didn't respect that at all. So I think it's very important to vote, and not just vote because they said, 'We don't need a vaccine passport.' Your vote affects a lot of other people, and I feel like some people forget about that, they're like, 'I'm not in that group of people, so it doesn't matter to me.'

“Some of us are like 30 and still living without parents, and it's hard to get a place right now. I'm very lucky that I have the apartment that I do, but now they're going to tear that down soon, and we're going to have to pay way more, so I'm hoping that something's actually done for that because it's really hard right now just to find a place to live.”

“People think, 'Oh, we can worry about it later,' but do you see what's happening to the planet right now? We need to speak about it now. We need to stop brushing it (aside) like it's absolutely nothing because it is everything, not just for us but for our kids, for the future, all of that.”

That first fellow, Edward, needs someone to educate him about climate change and all the other issues that are extremely important.