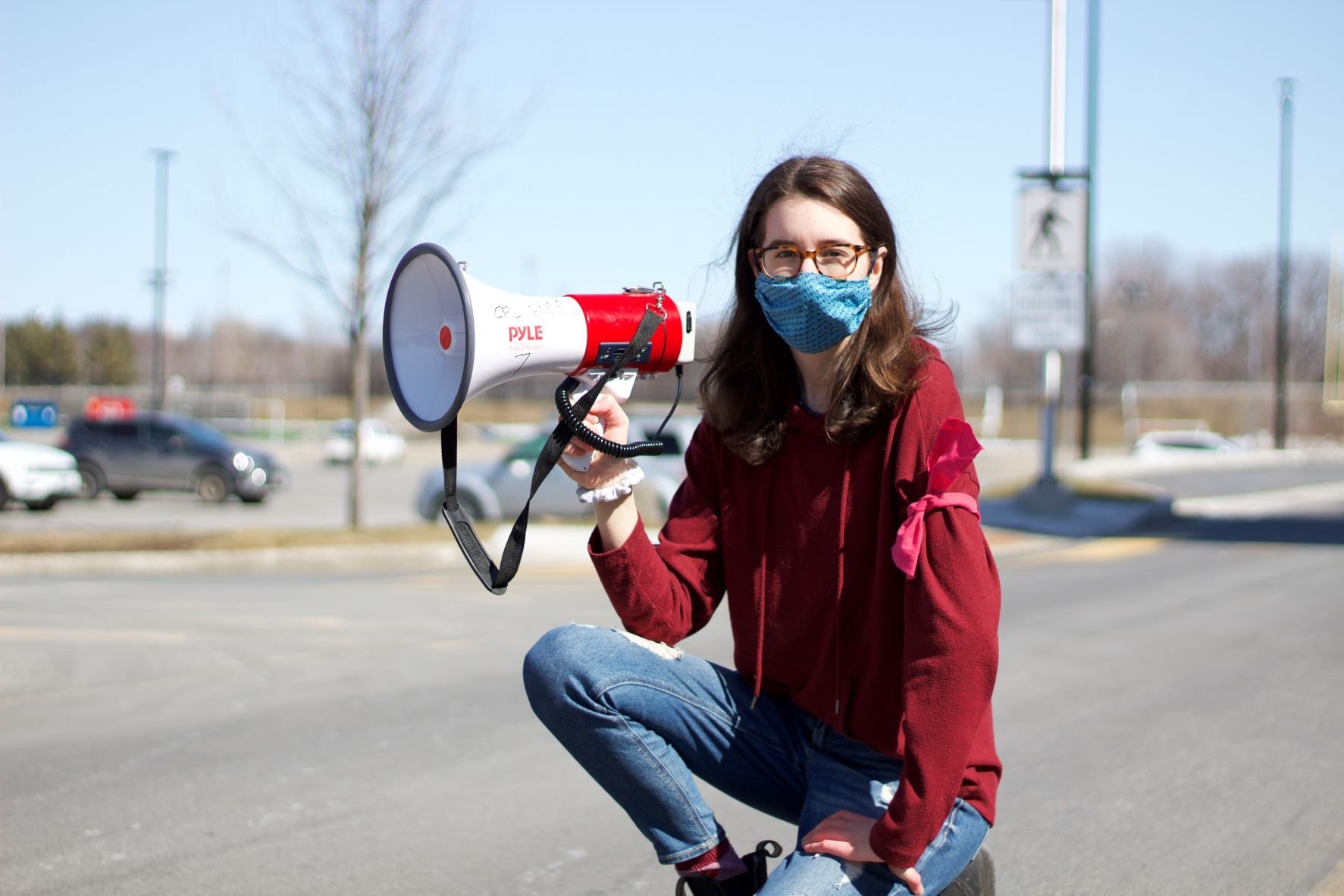 Malaika Collette at the Global Day of Climate Action in March. Photo by Sophie Price
Previous story
Next story

As part of a series highlighting the work of young people in addressing the climate crisis, writer Patricia Lane interviews Malaika Collette, one of 350 Canada’s climate champions.

Malaika Collette spent the election campaign period in high gear. She spent hours texting with voters urging them to support candidates identified as climate champions by 350 Canada. She organized an all-candidates debate on climate justice, which highlighted the need for climate action. Malaika also organized and co-moderated a high school debate attended by more than 850 students in her riding.

When I chatted with her on the eve of the federal election, this 18-year-old was looking forward to casting her ballot for the first time and then, after taking a break, preparing to re-engage with other youth taking leadership at COP 26.

Tell us about your efforts during this election.

I really enjoyed having meaningful conversations with voters about how to choose a candidate who will prioritize action on climate justice. Sometimes this meant talking with them about why a particular candidate was a stronger climate champion than another. If they supported that person, I encouraged them to volunteer for them and donate. Sometimes it meant giving basic information, like where the polling station was and what times the polls were open. I liked knowing that even though in my riding of Peterborough-Kawartha, our unfair electoral system means we are unlikely to elect a strong climate candidate, (but) I could help advance this crucial agenda.

I wanted to raise the profile of climate justice with local candidates, so I helped organize an all-candidates meeting in my own riding. Two hundred people attended, which meant all four candidates had to reckon with the reality that people in this riding really care about the climate emergency, and decision-makers must accept accountability for lack of action to date. It was very rewarding to help craft debate questions that resonated with youth and helped link issues of justice to the climate emergency.

I wanted to provide a meaningful way to draw in high school students. Even though many cannot vote yet, they will soon and they all have families who have conversations about values. I hosted a debate attended by 850 students from 30 classes in the region. I am happy knowing that they were better able to talk to their friends and families after that, and that votes in this region will be that much better informed.

What was the spark for you to become so involved?

"My parents have always been concerned about environmental issues, but what really drew me in was a course called Youth Leadership in Sustainability," says climate activist @MalaikaCollette. #ClimateCrisis #COP26

My parents have always been concerned about environmental issues, but what really drew me in was a course called Youth Leadership in Sustainability. That semester, I learned about the issues in my own community and how to make my voice heard. It gave me the confidence to do media interviews, talk to municipal councillors, and organize along with other people.

Knowing how important it is. This summer, I remember walking up the hill to my home after work and seeing the fields covered in smoke from the wildfires in other places. I saw air-quality warnings and temperatures in the high 30s on my phone. This is not a smoggy city in a faraway country. This is rural Canada. If we do not see the changes we are pushing for soon, we will not have a future.

As a young person without much clout, it can be discouraging to see politicians and industry leaders contributing to delay. But then I talk with many other people who are engaged and whose work is obviously making a difference and I feel hopeful. It was really rewarding to know that my conversations with voters meant that climate champion candidates will get more votes as a result of my efforts.

What’s next for you?

Last November, when it became clear to youth around the world that adults were not going to do anything much to replace COP 26, hundreds of youth from around the world organized our own “Mock COP26.” Out of that came a Global Youth Treaty, which sets out 18 principles we urge world leaders to adopt and bring to others in Glasgow in November this year. I will be turning my attention to this and to the global climate strikes, which start Sept. 24.

Get involved. It is fun, rewarding, and easier than you think. Talk to another youth like you or a teacher or reach out to a group you see organizing in your community. They need your energy and ideas, and you will learn and feel supported.

Is there anything you would like to say to older readers?

We need you, too. You have experience in managing previous disasters and crises, and we cannot do this without you. Please lend your hands, heads, and hearts to whatever organization speaks to you, and please support the young people around you in the work they do.