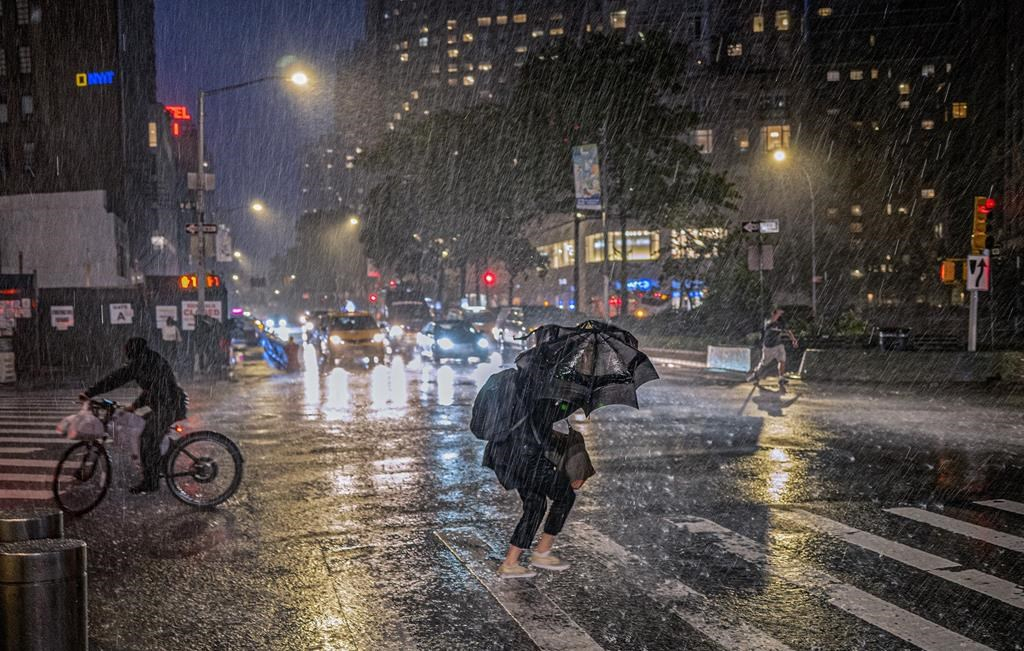 People travel through a torrential downpour caused from the remnants of Hurricane Ida, near Columbus Circle on Wednesday, Sept. 1, 2021. File photo by The Associated Press/Craig Ruttle
Previous story
Next story

When the remnants of Hurricane Ida dumped record-breaking rain on the East Coast this month, staircases into New York City’s subway tunnels turned into waterfalls and train tracks became canals.

In Philadelphia, a commuter line along the Schuylkill River was washed out for miles, and the nation's busiest rail line, Amtrak's Northeast Corridor running from Boston to Washington, was shut down for an entire day.

Nearly a decade after Superstorm Sandy spurred billions of dollars in investment in coastal flooding protection up and down the East Coast — some of which remains unfinished — Hurricane Ida and other storms this summer provided a stark reminder that more needs to be done — and quickly — as climate change brings stronger, more unpredictable weather to a region with some of the nation’s oldest and busiest transit systems, say transit experts and officials.

“This is our moment to make sure our transit system is prepared,” said Sanjay Seth, Boston’s “climate resilience” program manager. “There’s a lot that we need to do in the next 10 years, and we have to do it right. There’s no need to build it twice.”

In New York, where some 75 million gallons (285 million liters) of water were pumped out of the subways during Ida, ambitious solutions have been floated, such as building canals through the city.

But relatively easy, short-term fixes to the transit system could also be made in the meantime, suggests Janno Lieber, acting CEO of the Metropolitan Transit Authority.

Installing curbs at subway entrances, for example, could prevent water from cascading down steps into the tunnels, as was seen in countless viral videos this summer.

More than 400 subway entrances could be affected by extreme rains from climate change in coming decades, according to projections from the Regional Plan Association, a think tank that plans to put forth the idea for a canal system.

“The subway system is not a submarine. It can’t be made impervious to water,” Lieber said. “We just need to limit how quickly it can get into the system.”

In Boston, climate change efforts have focused largely on the Blue Line, which runs beneath Boston Harbor and straddles the shoreline north of the city.

Summer #storms were a climate-change wake-up call for #subways. #ClimateChange

This summer’s storms were the first real test of some of the newest measures to buffer the vulnerable line.

Flood barriers at a key downtown waterfront stop were activated for the first time when Tropical Storm Henri made landfall in New England in August. No major damage was reported at the station.

Officials are next seeking federal funds to build a seawall to prevent flooding at another crucial Blue Line subway stop, says Joe Pesaturo, a spokesperson for the Massachusetts Bay Transportation Authority. The agency has also budgeted for upgrading harbor tunnel pumps and is weighing building a berm around an expansive marsh the Blue Line runs along, he said.

In Philadelphia, some flood protection measures completed in Superstorm Sandy's wake proved their worth this summer, while others fell short.

On the bright side, shoreline “armoring” efforts prevented damaging erosion in what was the highest flooding in the area since the mid-1800s. That has buoyed plans to continue armoring more stretches along the river with the cable-reinforced concrete blocks, Lund said.

If anything, he said, this year’s storms showed that flood projections haven’t kept up with the pace of environmental change.

“We’re seeing more frequent storms and higher water level events,” Lund said. “We have to be even more conservative than our own projections are showing.”

That’s on top of the work WMATA has undertaken the last two decades to mitigate flood risks, she said, such as raising ventilation shafts, upgrading the drainage systems and installing dozens of high-capacity pumping stations.

But it’s an open question whether they’re planning ambitiously enough, he said, pointing to Washington, where subway lines along the Anacostia and Potomac rivers into Maryland and Virginia are particularly vulnerable.

Similar concerns remain in other global cities that saw bad flooding this year.

In China, Premier Li Keqiang has pledged to hold officials accountable after 14 people died and hundreds of others were trapped in a flooded subway line in Zhengzhou in July. But there are no concrete proposals yet for what might be done to prevent deadly subway flooding.

In London, efforts to address Victorian-age sewer and drainage systems are too piecemeal to dent citywide struggles with flooding, says Bob Ward, a climate change expert at the London School of Economics.

The city saw a monsoon-like drenching in July that prompted tube station closures.

“There just isn’t the level of urgency required,” Ward said. “We know these rain events will get worse, and flooding will get worse, unless we significantly step up investment.”

Other cities, meanwhile, have moved more swiftly to shore up their infrastructure.

Tokyo completed an underground system for diverting floodwater back in 2006 with chambers large enough to fit a space shuttle or the Statue of Liberty.

Despite an infusion of federal stimulus dollars during the pandemic, Boston’s T and other transit agencies still face staggering budget shortfalls as ridership hasn't returned to pre-pandemic levels.

The stunning images of flooding this summer briefly gave momentum to efforts to pass President Joe Biden’s $3.5 trillion infrastructure plan. But that mammoth spending bill, which includes money for climate change preparedness, is still being negotiated in Congress.

“It’s great to have these plans,” Martello said. “But has to get built and funded somehow.”