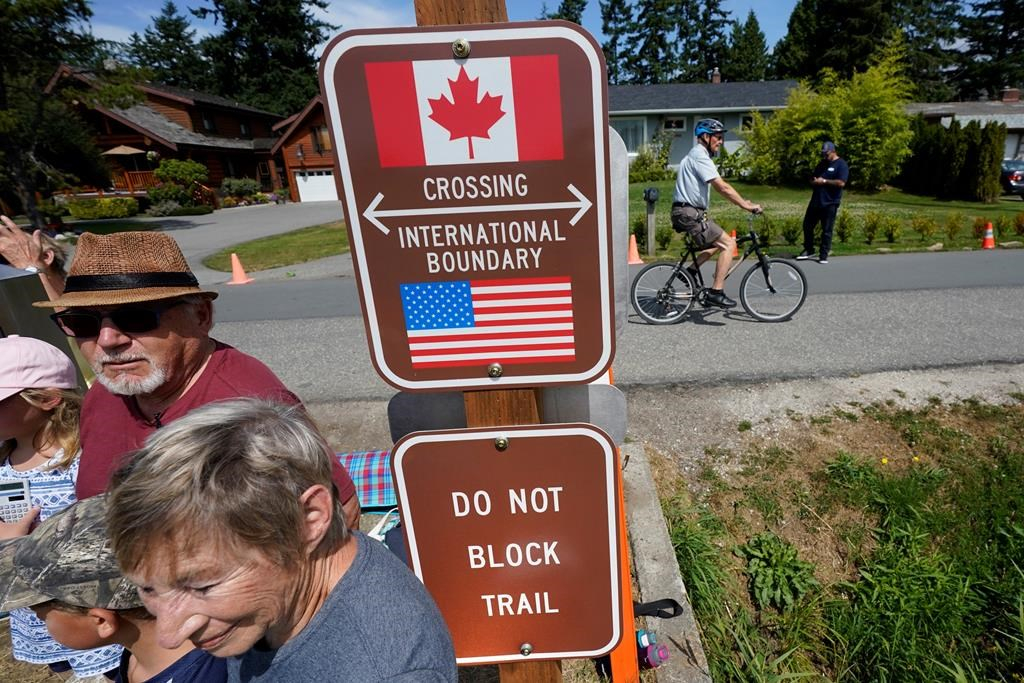 A family visits across the U.S.-Canada border at the Peace Arch Historical State Park as a cyclist rides past on the Canadian side, Monday, Aug. 9, 2021, in Blaine, Wash. File photo by The Associated Press/Elaine Thompson
Previous story
Next story

Fully vaccinated Canadian vacationers and day-trippers will be allowed to drive into the United States beginning in early November, the Biden administration said Tuesday, the first glimmer of hope in nearly 20 months for the families and businesses that depend on two-way traffic across the Canada-U.S. border.

Senior government officials delivered the news in a conference call with reporters on condition they hold their reports until early Wednesday — a plan that quickly went out the window when New York congressman Brian Higgins all but shouted the news from the rooftops.

"At long last, there is action by the United States to open the doors and welcome back our Canadian neighbours," Higgins said in a statement.

"Border communities await further details from the administration with great expectation, and I will continue to advocate for a more fully and freely open border to both governments, sooner rather than later."

Those details remained few and far between Tuesday, but the plan is designed to dovetail with the administration's existing plan to allow international travellers from further afield to resume travelling to the U.S. on the same timeline, provided they've been fully vaccinated against COVID-19.

"We understand how valuable ... travel from Canada and Mexico is to the economic activity in border communities and to our broader economy," one of the officials said.

"We also know how meaningful the ability to travel is to maintain the personal ties between people living on either side of the northern and southern U.S. borders, who are often effectively members of one community."

Travellers will be considered to be fully vaccinated if they have received a full course of a COVID-19 vaccine approved by either the U.S. Food and Drug Administration or the World Health Organization, which includes Oxford-AstraZeneca, a common vaccine in Canada that never received FDA approval.

The jury is still out on whether travellers who received mixed doses will be eligible, but experts at the U.S. Centers for Disease Control and Prevention are currently working on how to address that issue, the officials said.

Higgins, who serves as co-chair of both the Canada-U.S. Interparliamentary Group and the Northern Border Caucus, became a tenacious and vocal critic of the restrictions as soon as the vaccines proved effective and accessible in both countries.

His efforts and those of allies in both countries, some of them mounting concerted media campaigns and lobbying efforts to expand awareness of the extended delay in easing the restrictions, soon resulted in a chorus of prominent U.S. congressional voices exerting pressure on the White House to take action.

"A robust cross-border exchange between the United States and Canada is fundamental to our binational relationship and mutually beneficial to our nations' citizens, businesses and economies," Higgins said.

"Strong vaccination rates in Canada made the continued border shutdown absurd and unjustifiable."

Fully vaccinated U.S. citizens and permanent residents have been allowed back into Canada since August, provided they have waited at least 14 days since getting a full course of a Health Canada-approved vaccine and can show proof of a recent negative COVID-19 test.

Beginning in early November, the U.S. plans to allow fully vaccinated visitors from a host of countries where stateside travel has long been restricted, including China, India, Ireland, Iran, South Africa, Brazil and the 26 European countries without border controls, known as the Schengen group.

No specific dates have yet been announced.

The decision to reopen the land border ends a 19-month freeze due to the COVID-19 pandemic and is part of a plan to also open the border with Mexico. Vehicle, rail and ferry travel between the U.S. and Canada and Mexico has been largely restricted to essential travel, such as trade, since the earliest days of the pandemic.

Both Mexico and Canada have been pressing the U.S. for months to ease restrictions on travel that have separated families and curtailed leisure trips since the onset of the pandemic. The latest move follows last month's announcement that the U.S. will end country-based travel bans for air travel, and instead require vaccination for foreign nationals seeking to enter by plane.

According to the officials, travellers entering the U.S. by vehicle, rail and ferry will be asked about their vaccination status as part of the standard U.S. Customs and Border Protection admissions process. At officers' discretion, travellers will have their proof of vaccination verified in a secondary screening process.

Unlike air travel, for which proof of a negative COVID-19 test is required before boarding a flight to enter the U.S., no testing will be required to enter the U.S. by land or sea, provided the travellers meet the vaccination requirement.

The delay in the vaccination requirement for essential cross-border travel is meant to provide truck drivers and others with additional time to get a shot and minimize potential economic disruption from the vaccination mandate, officials said.