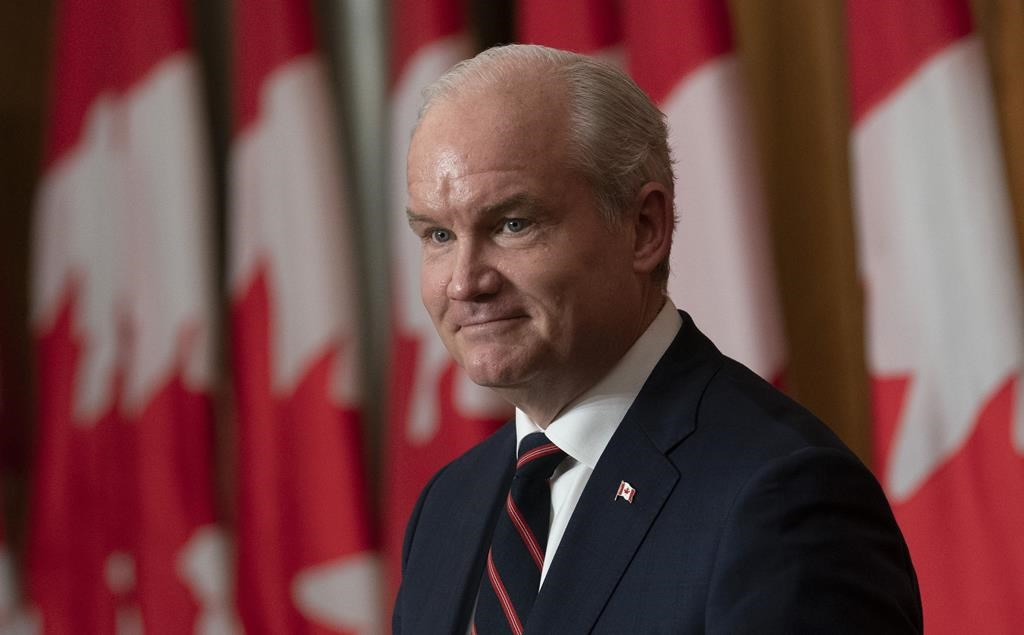 Conservative Leader Erin O'Toole listens to a question from a reporter during a news conference following caucus in Ottawa, on Tuesday, Oct. 5, 2021. File photo by The Candian Press/Adrian Wyld
Previous story
Next story

One of the challenges for Erin O'Toole, in staying on as Conservative leader, will be deciding whether his MPs must be fully vaccinated against COVID-19 to enter the House of Commons.

Mandatory immunization has been called for by the Liberals and Bloc Québécois, and supported by the NDP, as parties prepare for Parliament to resume following last month's federal election.

It's unclear when MPs will return, but Prime Minister Justin Trudeau has introduced a vaccine mandate set to take full effect Dec.1 that will require air and train passengers to be immunized in order to board.

Included in that policy will be federal politicians travelling to Ottawa from different parts of the country.

Conservative whip and Alberta MP Blake Richards said negotiations around returning to the House of Commons haven't started yet and "we will continue to follow all public health guidelines and encourage every Canadian who is able to get vaccinated."

He added "under no circumstances will Conservatives support virtual Parliament," with members participating via videoconference. His office has yet to clarify whether it supports or opposes the calls for MPs to be fully vaccinated against COVID-19.

During the campaign O'Toole opposed the Liberal plan to make vaccination the rule for federal public servants, people working in government-regulated industries and domestic travellers.

But he was silent last week when a re-elected Trudeau unveiled the policy, with British Columbia MP Mark Strahl tweeting the mandate is "discriminatory, coercive and must be opposed."

"We must continue to demand reasonable exemptions and accommodations, like rapid testing, for those unable or unwilling to be vaccinated."

O'Toole's office has yet to provide a response as to whether the Conservative leader remains opposed to the federal mandate. It also didn't reply when asked about his message to Conservative MPs who might not be fully vaccinated, given he didn't make immunization a requirement for candidates during the campaign.

An analysis by The Canadian Press reveals at least 77 of the 119 elected Conservative members say they are fully vaccinated.

Another 37 did not respond by deadline time, with spokespersons in the offices of British Columbia MP Kerry-Lynne Findlay and Manitoba's Ted Falk saying they declined to comment on their vaccination status.

During a candidates debate last month, Leslyn Lewis — a former leadership rival of O'Toole's who is heavily supported by the party's social conservative base — said she's "pro-vaccine," but doesn't share her personal status with the public.

A spokesman for Marc Dalton says the B.C. MP is partially vaccinated and plans to get a second shot.

Longtime Ontario MP Dean Allison is one of two members who say they can't receive a shot because of medical reasons.

During the campaign, Allison said he adhered to rapid testing and had a doctor's note, but "there hasn't been really a lot of conversation so far" about what he should do going forward.

"All the candidates had to support the message of the leader, that we were opposed to mandatory vaccines," he said, adding he disclosed his status to the whip's office.

Newly elected Conservative MP Clifford Small said he is fully vaccinated and expects discussions about the new federal mandate "in the very near future."

This report by The Canadian Press was first published Oct.13, 2021.

— With a file from Catherine Lévesque

As COVID rages in Sask. one unvaccinated MLA resigns from caucus

Too many hard ultra right

Too many hard ultra right wingers to mandate vaccines.