B.C. moves from leader to follower with new climate plan 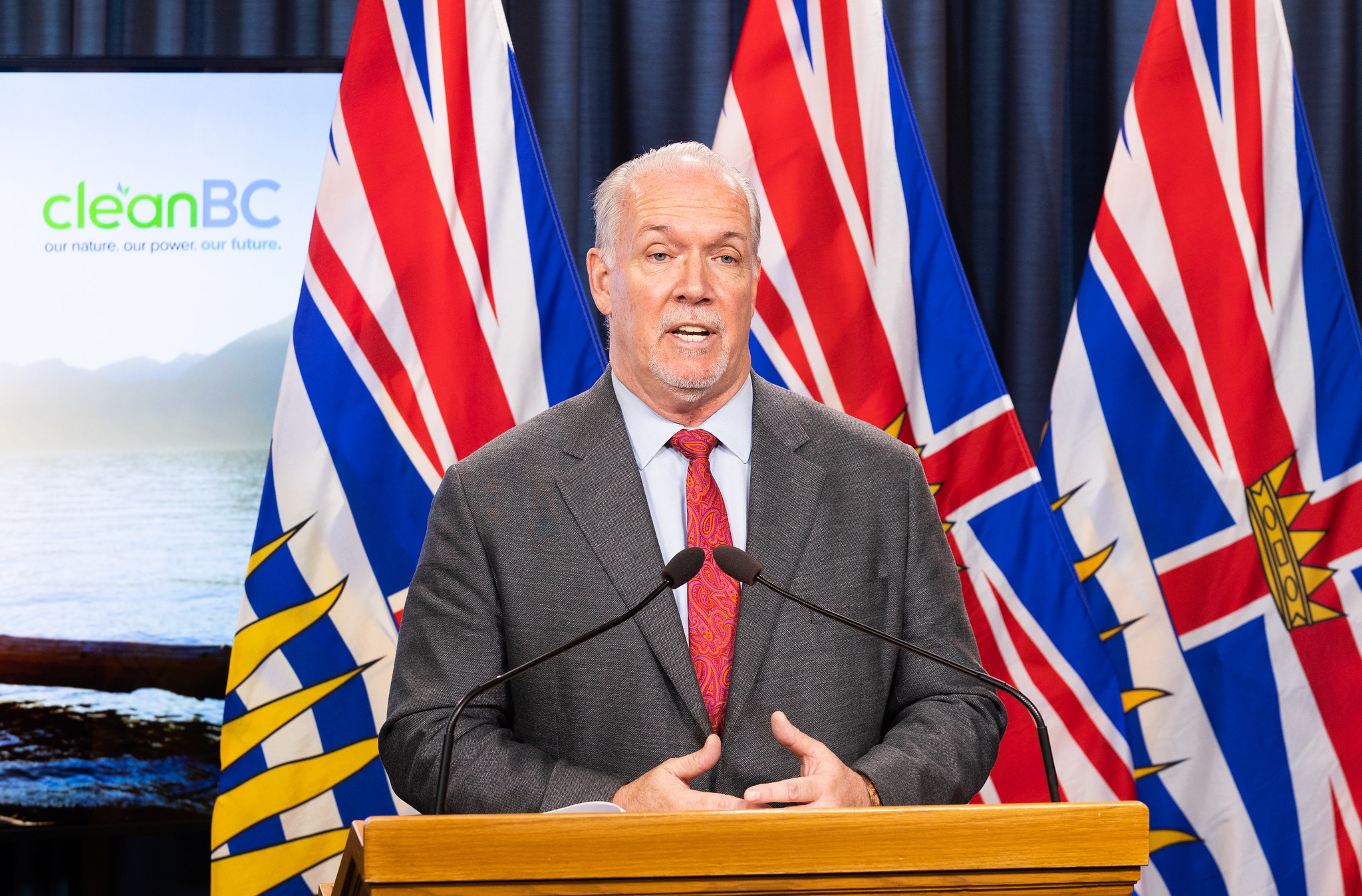 This week, as governments prepare to head off to Glasgow, Scotland, for the UN’s COP26 climate negotiations, the B.C. government released the long-awaited update to its provincial climate plan, dubbed its “CleanBC Roadmap to 2030.”

Reviewing the plan, it’s as if this summer’s deeply distressing smash-up against the climate emergency never happened. Despite hundreds of lives lost to the June heat dome — the most deadly weather event in Canadian history — the destruction of the town of Lytton and thousands of evacuations, nothing about this new plan conveys a sense of urgency. It’s not a roadmap to any kind of victory in this fight of our lives; at this pace, it’s a lackadaisical stroll towards a terrifying future, with most of the key actions backloaded to 2030.

In a welcome move, the Roadmap, unlike the plan three years ago, uses some “emergency” and “crisis” language. But no part of the substance of the plan communicates speed or scale. In short, it is not an emergency plan.

The B.C. government states the Roadmap is its “plan to hit our legislated 2030 target and accelerate the changes needed to achieve net-zero by 2050.” To remind readers, the provincial government released its last official climate plan, CleanBC, in late 2018. That plan committed to reduce provincial GHG emissions by 40 per cent (from 2007 levels) by 2030, but acknowledged at the time the government hadn’t fully figured out how to hit that target. The Roadmap purports to fill the gap. I have my doubts.

The B.C. government is keen to protect its reputation as a climate leader, and repeatedly claims its plan is “continent-leading.” A reasonable case in support of this proposition might have been possible three years ago. But it is not true any longer. B.C. is now a climate follower. The few substantive new elements of the Roadmap are, in fact, simply B.C. instituting what the federal climate plan will now require of all provinces:

All these are measures the federal government has announced it is making the law of the land.

On the positive side, the Roadmap states a zero-emission vehicle (ZEV) mandate will also be brought in for medium- and heavy-duty vehicles, but on this score, the province will simply follow what California does. The Roadmap will strengthen the low-carbon fuel standard (requiring producers to gradually lower the carbon intensity of fuels over time). And it proposes some bold new approaches to lowering transportation emissions, targeting a 25 per cent reduction in vehicle distance travelled by 2030 and mode shifting away from personal vehicles and gas-powered trucks. But the plan is vague as to how these goals will be attained.

With respect to buildings, the plan should have announced that all new buildings must be zero-emission by next year, and that new buildings will not be able to tie into gas lines (as other jurisdictions are starting to do). Instead, it says all new buildings must be zero-emission by 2030 (a modest two-year improvement over what the plan was three years ago). Does that communicate emergency? So, for the next eight years, we will continue to see new buildings come on stream that, if we are indeed to hit net-zero by 2050, will have to be retroactively retrofitted and fuel-swapped in order to meet that 2050 goal.

It is worth noting that if the nearly 600 mostly isolated seniors who perished in the June heat dome had lived in homes already converted to electric heat pump systems — which also cool in the summer — they would, in all likelihood, still be with us.

The B.C. government still steadfastly refuses to rethink the expansion of fossil fuel extraction, even as other North American jurisdictions do so. Just last week, Quebec announced it will end the extraction of oil and gas in its province (granted, Quebec’s fossil fuel industry is not as large as B.C.’s, but Quebec is walking away from some gas reserves and licences). Also last week, California announced it would no longer allow oil drilling within a kilometre of homes and schools, a move that could affect a third of the state’s production. This comes after California announced it is ending new fracking licences as of 2024, and Washington state is likewise ending the practice. Washington is also aggressively tackling fossil fuel subsidies, while B.C.’s subsidies are growing.

With regard to the oil and gas industry, the Roadmap merely states a new policy framework will be forthcoming in 2023 — meaning, it is a plan to have a plan. And it remains unknown the degree to which the government will be relying on untested carbon capture and storage technology to meet its reduction targets for that sector. The government says its modelling of the Roadmap plan assumes the completion of only one liquified natural gas project — Phase 1 of LNG Canada. Yet the government stubbornly refuses to state that no other LNG projects will be permitted. Given that, only two possibilities exist: either we will see more LNG projects that derail this plan, or the government is disrespectfully stringing along other LNG proponents (including some Indigenous partners who are spending a lot of time and money on these projects) when in truth, these proposals cannot see the light of day.

Of course the single project still “accommodated” in the government’s modelling — LNG Canada Phase 1 and its associated Coastal GasLink pipeline — is problematic enough. The very day the province released its Roadmap, things were heating up in Wet’suwet’en territory, where the CGL pipeline is planned to carry fracked gas from northeast B.C. to the LNG plant on the coast, a project that, if completed would add four to six megatonnes of GHGs to the province’s annual emissions. Indigenous land and water defenders are again setting up blockades and are in confrontation with the RCMP as they seek to prevent construction of the pipeline through their territory. Also the same day, the Union of BC Indian Chiefs issued a call to the province to end the B.C.’s fracking and LNG industry in response to the climate emergency. The contrast could not be more stark.

Interestingly, in the appendix to the Roadmap (see table below) comes the admission that the CleanBC plan presented three years ago only would have reduced GHGs by 10.5 megatonnes by 2030 (of the reduction target of 26.3 megatonnes) — well under 50 per cent of the goal — whereas the new measures are supposedly going to close the gap with a further 16.2 megatonnes of reduction. Quite the walk down from three years ago. Forgive me if it seems a stretch to think these new measures will prove so much more effective.

Finally, it bears highlighting that even if this Roadmap were to successfully hit the government’s 2030 target to reduce GHGs 40 per cent, that target is not aligned with what the Intergovernmental Panel on Climate Change now says is necessary. Were we guided by what the world’s leading climate scientists are saying, a wealthy jurisdiction like ours should be reducing emissions by at least 60 per cent in that time.

The Climate Emergency Unit (with which I work) is one of more than 240 diverse organizations that have signed an open letter calling on the B.C. government to confront the climate emergency and undertake 10 urgent climate actions. Comparing the Roadmap to those 10 actions, notwithstanding some moves in a few areas, the new plan does not hit any of those emergency measures.

A sliver of hope: the plan states, “This Roadmap will serve as an evolving plan to get us to our targets. Climate policy doesn’t work if you set it and forget it, so the Roadmap will be updated as we move forward, learn from our experience, and craft new solutions to meet our goals.” More updates are indeed in order.

I know there are people inside government fighting hard for a real climate emergency plan. And there are elements of the Roadmap I like and that represent modest improvements over what we previously had. Sadly, though, those at the top just don’t seem to get it. And if this past summer can’t move them into emergency mode, I’m not sure what will.

Great review and analysis Seth. Thanks for this.
Perhaps Heyman and Horgan are secretly counting on the Wet'suwet'en (and others) to stop the fracked liquified gas industry. That's getting pretty likely and is the only way BC can come anywhere close to meeting it's stated GHG reduction targets.

It has been very frustrating

It has been very frustrating how absolutely putrid the NDP government has been on climate change and the environment. I expect this from the BC Liberals, but this government does not seem to be, in other areas, notably in the pockets of big money, so what's with this one file? Horgan seems to be an old school union guy, which in general I favour, but it does often go with not getting the environment, and Horgan seems to be an example of that. I've also heard that Moe Sihota has a lot of fingerprints on resource files; Sihota's corrupt and I thought he'd been run out of the party years ago but it seems like on the quiet he's still influential.