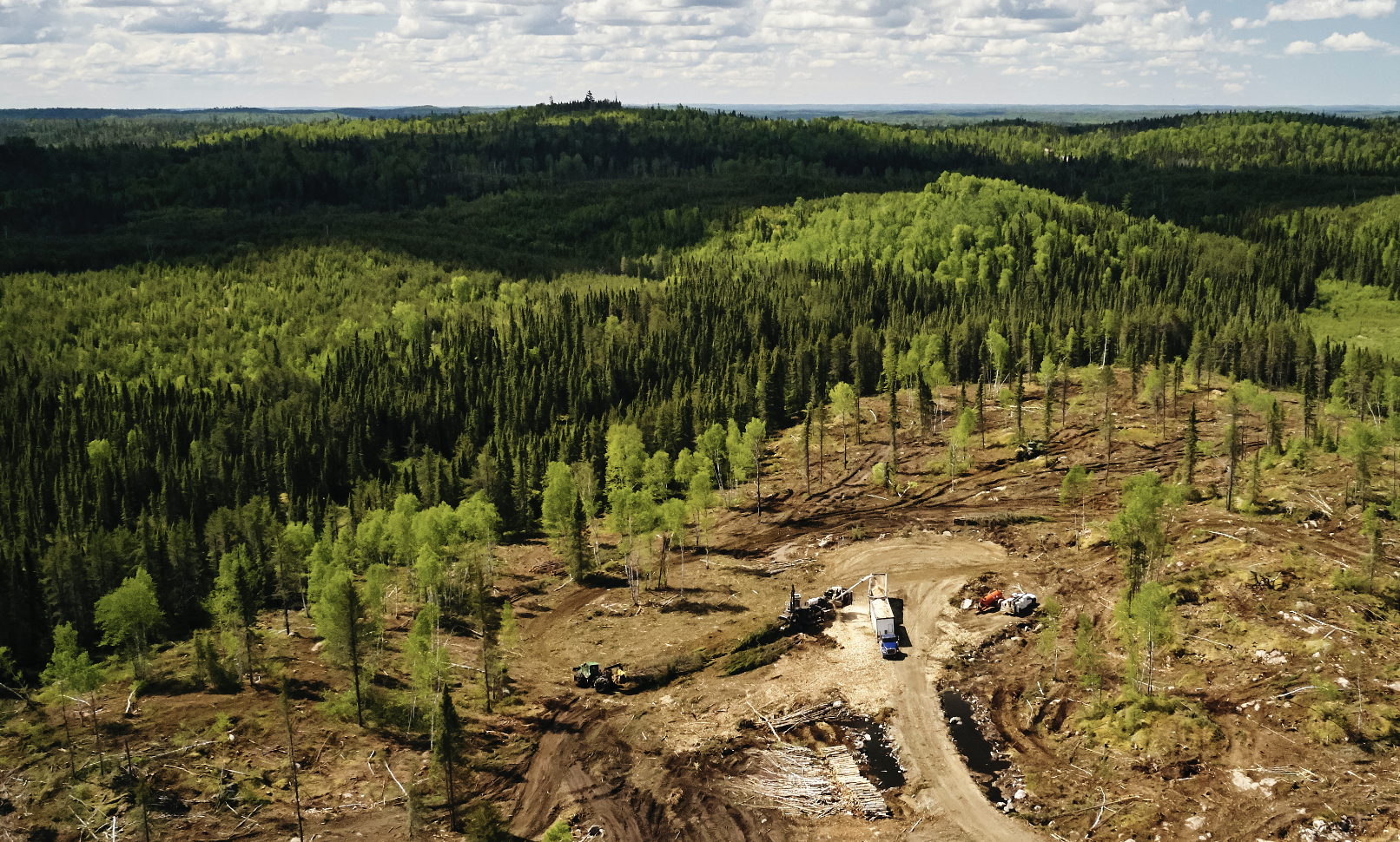 An overhead look at part of a boreal forest in northwestern Ontario. Photo courtesy of River Jordan for NRDC
Previous story
Next story

If you collected the 80 million tonnes of carbon emissions that come from buildings in Canada each year, you’d have the same amount of greenhouse gases the country underreported in its forestry sector in 2019.

Underreporting emissions by 80 million tonnes is significant, said Alice-Anne Simard, the executive director of Nature Québec, who notes forests around the world absorb one-third of human-caused emissions each year by storing carbon in their soil and flora.

Canada's boreal has a huge role to play in that — spruce, fir, pine, and tamarack trees line the 1.3 billion acre area, storing 186 billion tonnes of carbon, or 27 years' worth, of the world’s carbon emissions from fossil fuel consumption.

However, when trees die, that carbon is released back into the air. It’s why Canada’s managed forest, which takes up a portion of the boreal forest, has actually emitted more carbon than it has absorbed since 2001. Cutting down forests, especially old-growth, releases millions of tonnes of GHG emissions, said Simard.

The report outlines a few ways this underreporting is happening, such as “using an unbalanced, biased accounting approach that ignores emissions from wildfires but claims credit for the CO2 captured by older trees.”

A new report from @naturecanada @nrdc @naturequebec and @envirodefence has found Canada is underreporting emissions from the forestry sector by more than 80 million tonnes a year.

That makes the logging industry look like it’s carbon-neutral when it really isn’t, explained Simard.

Currently, Canada doesn’t count emissions from wildfires, even though in the province of British Columbia alone wildfires are now burning 10 times more than in the 1990s. If you couple that underreporting with the country taking credit for CO2 captured by older trees, it paints an unfair picture, said Simard, who noted many of these trees are not managed by the forestry sector.

It’s reminiscent of net-zero pledges from fossil fuel and tech companies, who say their offsets from planting trees and other initiatives make up for their emissions, said Simard.

“You cannot take credit from carbon that is being absorbed by trees if you do not manage them. They’re just trees that are naturally growing — that they have not planted,” she said.

Other ways the report says Canada is underreporting emissions include “failing to measure and report emissions related to logging roads and seismic lines” and by “exempting the logging industry’s emissions from carbon pricing regulations on other sectors.”

“There's a price on pollution ... in Canada on the combustion of fossil fuels, but there's no price put on the emissions produced by the logging industry,” said Simard.

Canada's National Observer reached out to NRCan on Friday afternoon for a statement on the findings but didn't immediately receive a response.

The report comes as Canada joins world leaders in Scotland for COP26.

The conference — also known as COP, short for Conference of the Parties — has brought the world together since 1995 to hammer out agreements to reduce global warming. The talks gather policymakers, scientists, environmental activists, climate experts, and news media from the 197 member countries of the United Nations Framework Convention on Climate Change (UNFCCC) to set and work towards global climate change goals. This year, COP26 takes place at the Scottish Event Campus in Glasgow, Scotland, from Oct. 31 to Nov. 12.

With Steven Guilbeault taking over as Canada's environment minister ahead of the conference, Simard said the report is especially timely. At the conference, leftover sections of the Paris Agreement will be finalized, so all eyes are on how Canada approaches those negotiations.

“(At COP26), there’s going to be a discussion about what we count when compensating for emissions, and how we can really obtain a carbon-neutral world using trees, but without all these loopholes and exceptions,” she said.

News that Canada is under-reporting forest carbon emissions by 80 Mt/year is concerning for our ability to meet climate targets. @CanningsNDP & I wrote to Min Guilbeault ahead of COP26 urging him to ensure accurate accounting of forest carbon in our emissions & climate plans./1 pic.twitter.com/kRTw9o2uoo

NDP MP Lauren Collins, who is the party’s critic for the environment and climate change, wrote a public letter to Guilbeault after seeing the report, co-signed by fellow NDP MP Richard Cannings, urging him to consider its recommendations.

“The implications of underreported emissions of that magnitude for Canada’s ability to meet our greenhouse gas emissions targets are serious and concerning,” reads the letter.

“Counting carbon is complex in the forest sector. But it is essential that we have an accurate accounting of forest emissions and sequestration if Canada is going to meet its climate change goals.”

The report's recommendations include Canada counting forestry emissions the authors say are now left out, such as those from wildfires. Also vital is making sure those solutions are Indigenous-led and centred, and that more funding goes towards Indigenous communities for forest management.

Ultimately, Simard said the importance of forests in Canada — and the solutions needed — cannot be undermined.

“Canada’s forests are essential to avoiding the worst impacts of climate change and catastrophic species loss,” she said.

“The world is looking to Canada for leadership, but first we need to address the fundamental flaws in our approach to forest carbon.”

Ms Simard and other advocates

Ms Simard and other advocates who clamour onto the OG-preservation bandwagon continue to propagate disingenuous notions about OG and CO2-sequestration, effectively commit the same kind of book-cooking they accuse industry of.

There is no doubt the so-called ‘carbon-credit’ system is cooked in favour of the forest industry: it depends on a grossly over-simplified analysis suitable for gulling amateur wilderness lovers infatuated with Mother Nature, Mother Goose, and Mother Trees (no offence to any of these intended).

Egregious misrepresentation of OG’s role in CO2 cycling is all too common these days—as much a ‘fad’ as tree planting has been (until recently) for the logging industry. One of the most glaring falsehoods is that OG forests absorb so much carbon as to a save us from human emissions. There are two, simple reasons why this is false—but not fully absorbed by a receptively misinformed public: first is that OG is full of its maximum capacity to store CO2—it does not absorb much CO2 at all because it is not growing much (trees only get so big) and, moreover, many OG stands, especially very long-lived ones, are decaying and releasing more CO2 than they absorb. The contrast with young, regenerated forests should be obvious were it not for the tug of war between industry greenwashing and preservationists’ green flag-waving.

Most citizens think of the big rainforest stands on the West Coast when the topic of OG is raised, as it often is these days with respect preservation of that kind of forest: but it’s become the plant-kingdom version of seal pups and Bridgette Bardot . However, the vast majority of OG in Canada is much smaller and not nearly as long-lived—and not nearly as advertised by preservationist PR experts—kinda like most rodents don’t get much preservation funding.

The different interests in forests (industry, government, First Nations, preservationists, labour unions, &c.) are each entrenched in their respective positions about policy to some degree. Some, like the Fairy Creek protest movement which demands ALL OG logging be stopped immediately, are almost hopelessly intransigent. Public policy makers are less-so, but perceived as being in the pocket of industry—a simplistic charge that ignores the exceptionally complex web of issues involved and the extent of work government does on citizens’ behalf.

The article above would be more credible if it hadn’t —almost perfunctorily—waded into the mug’s game of equating OG with active, significant sequestration. Otherwise, it’s quite true that carbon accreditation for managed forests has been biased toward industry profitability, perhaps the worst shell-game being the commodification and transferability of said credits, tantamount to sub-prime mortgages and sneaky derivative vessels of bad debt: the amount of carbon accredited by policy is way less, in proper bookkeeping, than physical reality: in effect, industry needs to pay more carbon tax during all the other aspects of transition it—and everybody else—has to get done.

That’s worthy of coverage for the sake of badly needed public education (Canada’s forest are largely publicly owned, after all, and their proper management is economically very, very important for all of us). However, continually playing the OG-sequestration card (and its attendant, willful ignoring of regenerating forests‘ capacity to absorb and store vastly greater amounts of CO2 than topped-up, full-capacity OG can ever do) really undermines the comprehension your readers need to make democratic decisions about how their forests are managed. Most citizens can’t be blamed for being misinformed: when it comes to forests, it happens almost every day.

The second factor not sufficiently articulated (each ‘side’ of the debate has its own reasons for its reticence to articulate the full story) is that the amount of CO2 humans generate is by far and away much too big for all the forests in the world to capture, no matter how well they are managed to that end. That fact, of course, is not a reason to do nothing, but people need to tone down the rhetoric, much of it exceedingly chauvinistic these days (what?—Covid?—tRump?—bad weather?...): there are plenty of good reasons to preserve more OG—of all kinds (especially certain biomes that are particularly threatened with extinction—like OG Douglas fir ecosystems on Vancouver Island and the Lower Mainland), but CO2 sequestration ain’t one of them. Similarly, we all gotta get on board with drastically reducing our emissions, especially from automobiles and home heating—something individuals can relate to—as well as industrial sources. That’s gonna be a political hard-sell, for sure, but facile bromides are becoming frustratingly plain.