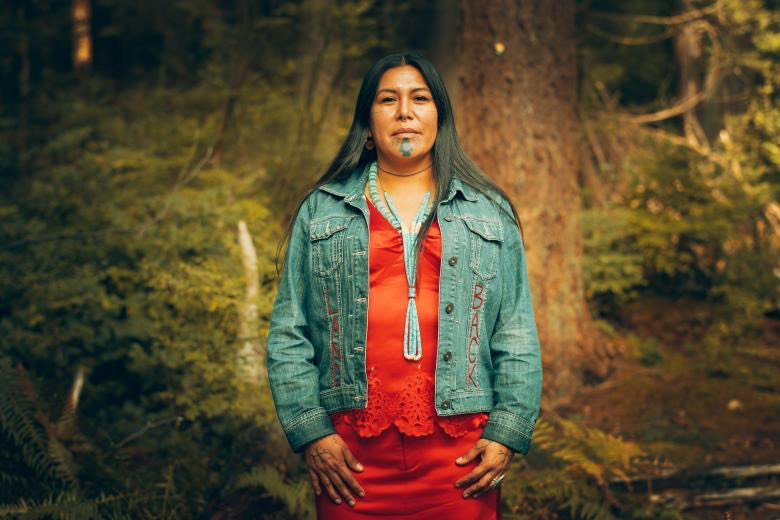 Kanahus Manuel, birth keeper and member of the Tiny House Warriors. The tiny homes provide housing for Secwe̓pemc families, while acting as a barrier to the TMX expansion. Photo supplied by Kanahus Manuel
Previous story
Next story

For almost four years, the Tiny House Warriors have been working to stop the TMX pipeline from encroaching on their territory, and as of Tuesday, the Secwe̓pemc land defenders have a human rights award to go along with their efforts.

The group, which has been building tiny houses in Blue River, B.C., since 2017 in an attempt to block the Trans Mountain pipeline expansion project, was presented with the Carole Geller Human Rights Award and the $15,000 that goes along with it. The recognition is welcome, said Kanahus Manuel of the Tiny House Warriors at a virtual event, as is the money, which will help with mounting legal fees associated with their front-line action.

The award, which was presented to members of the Idle No More movement in 2013, is named after the first executive director of Manitoba’s Pay Equity Bureau and human rights activist Carole Geller.

“This is a pivotal moment in the history of Indigenous peoples and of Canada,” said Shelagh Day on behalf of the award committee.

“The Tiny House Warriors are defending Indigenous rights and sovereignty, the land and its resources, and the rights of Indigenous women to be safe from male violence. They are also bringing to the attention of all Canadians that respect for fundamental human rights for Indigenous peoples is at stake in the fight over pipelines.”

Manuel pointed to her late father Arthur Manuel, an Indigenous leader and activist known for writing The Reconciliation Manifesto and Unsettling Canada, who she said would always say it’s the “the land and self-determination that we are fighting for.”

The TMX pipeline, originally built in the 1950s, was taken over by Texas-based Kinder Morgan in 2015, which then made plans to triple the exports of the existing operation, hiking production to 890,000 barrels each day flowing from Alberta to the coast of B.C. The federal government purchased the pipeline in 2018 for $4.5 billion. The Trans Mountain expansion is projected to cost $12.6 billion and is opposed by hundreds of First Nations, as well as the cities of Vancouver and Burnaby.

The Indigenous land defender group, which has been building tiny houses in Blue River, B.C. since 2017 in an attempt to block the pipeline, was presented with the Carole Geller Human Rights Award on Tuesday. #TMX #TinyHouseWarriors

As well as being opposed to the pipeline, the Tiny House Warriors are also deeply concerned about the “man camp” attached to the project, which would see 550 temporary pipeline workers would live during construction. Reports show a direct correlation between labour encampments and violence against women in nearby communities.

The event was hosted by Pamela Palmater, Mi'kmaq lawyer and chair of Indigenous governance at Ryerson University, who spoke about the Tiny House Warriors and other land defenders’ work in protecting the environment. A report earlier this year found Indigenous resistance to fossil fuel projects in Canada and the United States over the past decade had stopped or delayed the equivalent of one-quarter of annual carbon emissions from the two countries.

“We are all facing a global climate crisis that demands that we stop destroying the planet and take steps to restore the harm that has been done,” she said.

Also present was Kukpi7 Judy Wilson, executive board member of the Union of British Columbia Indian Chiefs, who spoke from Scotland where she is attending the UN climate summit, COP26. She said considering the impact Indigenous land defenders have on the climate and Indigenous rights, there’s very little recognition, and at the same time, they’re being criminalized. She said that goes against what was laid out in the UN Declaration on the Rights of Indigenous Peoples (UNDRIP), which recognizes free, prior, and informed consent from Indigenous people regarding projects that could affect them or their territories.

The recipients stood in front of one of their tiny homes during the virtual event, adorned with a black, white and red mural. Manuel outlined numerous ways the Tiny House Warriors, as well as Indigenous land defenders in general, are endangered while on the front lines, while emphasizing their dedication to protecting the land from the fossil fuel industry.

“We are constant — it's not a nine-to-five job. This is a 24-hour job. Every breath, we're praying for our lands, for our freedom and liberation, and our land and our self-determination,” said Manuel.

“So thank you for this acknowledgment.”

Would we settler types could

Would we settler types could become so steadfast, and determined to protect the land and our right to live sustainably on it.

First Nations and the

First Nations and the children are the only hope to save us from ourselves, if any saving is to happen. So support them!!! Support Raven Trust, Eco Justice with money every month to fight the Fossil fools in court. Money is all those fools hear.
Vote the Fossil puppets OUT OF OFFICE :that is doug and the destroyers in Ontario, KKKenney is Alberta Scoot mooo in Sask (sexit ) for a start.