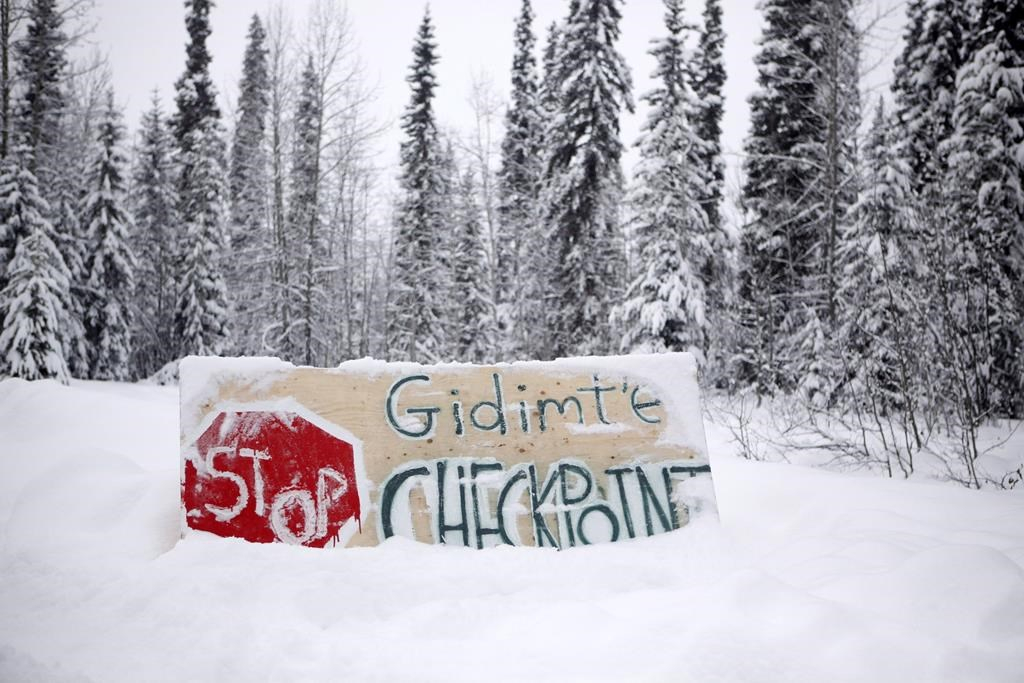 A Gidimt'en checkpoint near the Unist'ot'en camp off a logging road near Houston, B.C., on Wednesday, January 9, 2019. File photo by The Canadian Press/Chad Hipolito
Previous story
Next story

Coastal GasLink says supplies like water are at risk of running out for more than 500 workers who have been stuck for three days behind blockades near a pipeline work site in northern B.C.

The natural gas pipeline company says it is very concerned for its workers, as the road is unsafe and impassable, obstructing access to medical care in the event of an emergency.

The blockade was erected Sunday by members of the Gidimt'en clan, one of five in the Wet'suwet'en Nation.

A spokesperson for the group has said the hereditary chiefs have never ceded or surrendered the territory, and the Coastal GasLink workers were given eight hours' notice to peacefully evacuate before the road was barricaded.

However, the Wet'suwet'en First Nation, which is one of several elected councils in the area, issued a statement Wednesday saying those clan members do not speak for everyone and its people are among the workers.

The statement says elected Wet'suwet'en councils support the project and the First Nation calls for an immediate end to the escalating conflict.

"Even though we are also members of the Gidimt'en Clan, the protesters at the 'Coyote Camp' and other protest sites have never consulted us about their actions and cannot claim to represent us or any other members of the First Nation," the statement says.

Crown-Indigenous Relations Minister Marc Miller said Tuesday talks between Wet'suwet'en hereditary chiefs, the B.C. government and Coastal GasLink were at a "critical junction" toward a resolution.

In both 2019 and 2020, conflict over the pipeline escalated when RCMP enforced court injunctions issued to Coastal GasLink and arrested project opponents.

Supporters of the hereditary chiefs held nationwide protests that stopped railways last year and put a spotlight on Indigenous rights and jurisdiction.

A memorandum of understanding signed since then between the federal and provincial governments and Wet'suwet'en hereditary chiefs had eased tensions, but Sunday's statement from the Gidimt'en clan said an "eviction notice" served to Coastal GasLink by the chiefs in January 2020 is being enforced again.

The natural gas pipeline project is more than half finished with almost all of the route cleared and 200 kilometres of pipeline installed so far, the company has said.

"The Wet'suwet'en First Nation is a First Nations band located outside of the village Burns Lake in the central interior of British Columbia. ... Its members speak the Wetʼsuwetʼen dialect of Babine-Witsuwitʼen, a Northern Athabaskan [Dene} language.
https://en.wikipedia.org/wiki/Wet%CA%BCsuwet%CA%BCen_First_Nation
The members of the Wet'suwet'en First Nation (WFN) are part of the same language group as the people who are blockading CGL, with the full support of their hereditary leadership. But the traditional territories of the WFN members do not include the Bulkley/Morice River (Wedzinkwa).
The Wet'suwet'en people of the Bulkley/Morice stem from the villages of Wit'set (Moricetown) and Hagwilget located on Wedzinkwa in the Smithers/Hazelton area. The traditional hunting, fishing, and trapping territories of the Bulkley/Morice Wet'suwet'en are in the territories owned by the traditional Chiefs and Clans of the Wit'set and Hagwilget peoples. These are the territories being defended against CGL and the government of BC.
The WFN and the Wet'swet'en of Wedzinkwa do belong to the same Wet'suwet'en language group, but they are geographically and politically distinct. This has led to quite a bit of confusion in the media, as illustrated in this article from Canadian Press and in many other mainstream media outlets.

[EDIT] In my comment above, I neglected to put close quotes at the end of the Wikipedia material, which ends just before the link to the longer Wikipedia article. All the text that follows the link, is mine, and is based on 8 years working and living with the Wet'suwet'en and Gitxsan on the Bulkley and Skeena Rivers.