By Steven Guilbeault | Opinion | November 22nd 2021
#98 of 99 articles from the Special Report: COP26: Uniting the World to Tackle Climate Change 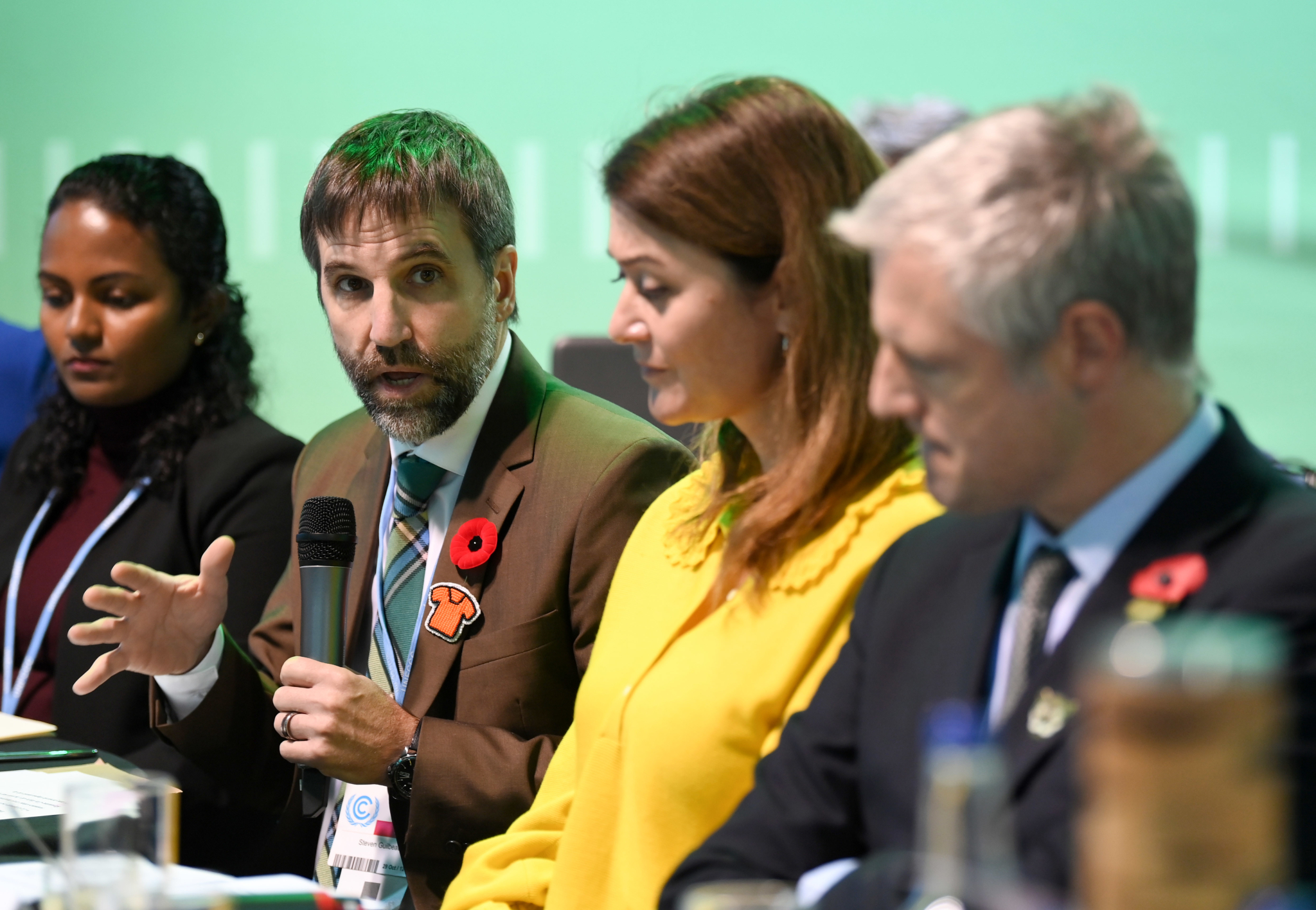 The 26th Conference of the Parties, or COP26, is behind us and the climate crisis continues. These two things we know.

Public post-mortems on the latest global climate conference are underway, with assessments ranging from apocalyptic to cautiously optimistic.

I’ll leave the handicapping to others.

This was my 19th COP since I attended the very first one, in Berlin in 1995, as a twenty-something activist. I kept going back because, as a climate activist, there is no better opportunity to encourage world leaders to go faster and further with ambitious but pragmatic measures to slow and stop climate change.

This year was different: My first COP representing Canadians as your Minister of Environment and Climate Change. Amid the ups and downs of summit diplomacy, one thing stood out that I wasn’t fully prepared for in Glasgow.

Inside those negotiating rooms, and behind the closed doors of my bilateral meetings, I heard a genuine appreciation and respect for the constructive role Canada is playing in the climate fight.

In fact, Canada’s work with Germany to chart out a credible path to achieve the US $100 billion in climate finance for developing countries was described by some as saving the credibility of COP26 before the summit even started.

Canadians need to hear this. We are witnessing the devastating impacts of a changing climate in real time. The scale, ferocity and frequency of severe weather events, like we are seeing in British Columbia, makes us allergic to climate boastfulness. So here is my assessment of COP26.

Canadians can take some quiet pride in the fact that over the past few years we have accomplished a lot, from cities and small businesses right up to the federal government, to put Canada on a path to achieve the kinds of emissions reductions we’ve been promising since the 1990s — and too often have failed to deliver.

In Glasgow, our international partners noticed.

When Canada, with one of the four largest oil and gas reserves in the world, committed to cap emissions from the oil and gas sector at current levels, that got attention.

When an energy producer like us committed to lead by cutting methane emissions in the oil and gas sector by at least 75 per cent by 2030, we received a second look.

Our boreal forests and peat lands are one of the four biggest natural stores of carbon on the planet. So when Canada made the clear link at COP26 between the climate fight and saving nature and biodiversity as two sides of the same coin, the world took notice.

Canada is recognized internationally as a leader and innovator in pricing pollution. Our price trajectory to 2030 is one of the most ambitious in the world, while putting more money back into the pockets of most Canadians.

Our domestic action on pollution pricing is what gave Prime Minister Justin Trudeau the licence to propose a global goal of tripling the amount of emissions covered by carbon pricing, from just over 20 per cent to 60 per cent by 2030. Again, the world took notice.

Canadians are quietly demonstrating a path — a way real climate action can be done — by a country that is both a big energy producer, a big consumer, and home to some of the world’s largest intact ecosystems.

No one is doing a victory lap here. Far from it. The climate crisis is happening.

The really hard work continues, on 197 domestic fronts around the globe, now that the COP26 delegates have gone home.

Canadians have given us an extremely ambitious climate mandate. That in itself is a sign of progress. As a lifelong environmentalist, I feel the responsibility of those expectations.

I have four growing kids and I can tell you I don’t win every argument at home. International climate conferences just raise the stakes. I’ll be travelling across the country by train early in the new year to speak with as many Canadians as possible about taking our country’s climate ambitions to the next level, here in Canada and for the next COP.

We’re going to fight the good fight — for the sake of my family, all Canadians and the planet.

I'm sure Mr Guilbeault is

I'm sure Mr Guilbeault is putting up a brave fight for climate responsibility in the corridors of power, and he's clearly had a couple of important successes. But he will only be able to truthfully say that Canada is making a positive contribution when (a) the target for emissions reductions by 2030 is increased to at least 60%, with firm policies to achieve it, (b) all infrastructure and development that enables expansion of fossil fuel production (including by not limited to the TransMountain pipeline expansion) is abandoned or banned, and (c) comprehensive Just Transition legislation is in place, placing Indigenous rights at the centre and providing a meaningful way forward for currently fossil industry dependent workers and their communities. And that's just the start.

Canada MAY be on track for SOME worthwhile impact BUT unless all EXPANSION of fossil fuel production (Fracking, TMX and Coastal Gas pipelines, Kitimat LNG, new coal mines, etc.) and discontinuation of all fossil fuel subsidies is announced I, for one, consider our Liberal Government to be failing miserably in its duty to Canadians.

Surely a person with environmentalist credentials like Steven Guilbeault can connect the dots and recognize that the indirect cost of increasing fossil fuel production (increasingly frequent and severe wildfires, extreme heat events, landslides/floods, pollution, diversity loss, and the associated health, fatality and infrastructure effects) far outweigh the low return Canada Canada is getting by, in effect, giving away our resources? Since we get almost no benefit, cancel them, raise royalty levels on existing production and cut all subsidies.

The PM has advanced the argument that new fossil fuel projects are essential to provide revenue to fight climate change is laughably ridiculous. I'd note that the Government had no difficulty spending huge amounts of money (I've seen estimates in the hundreds of $Billions) to support Canadians during the COVID pandemic (and simultaneously $billions in subsidies to largely foreign owned fossil fuel companies).

If we were at war Government would find the money. Well, in essence we should be acting as if we are in a war against climate change.

Policies that use both regulatory and economic incentives to reduce demand for fossil fuels are needed. Carbon tax levels on fuel in Canada, relative to much of the rest of the world, are laughably low. That's why Canada has the least fuel efficient vehicle fleet in the world. Consider ways (e.g. EV incentives, vehicle licensing requirements based on emission level) to encourage retirement of older vehicles. Consider quotas on fuel for vehicles for non-essential use. Work with city government to ban any future installation of oil or gas heating and cooking (while funding a modernized electrical grid and green energy generation). Encourage public and human powered (e.g. bicycle) transportation by making roads less car friendly. The list goes on. And I haven't even touched on ending old growth and clear cutting of timber ...

I am happy that we have

I am happy that we have Steven Guilbeault, a committed environmentalist, as our Minister of the Environment and Climate Change. The article he has written highlight's Canada's positive contributions to COP26, while highlighting the fact that Canada has "too often failed to deliver" on it's climate commitments.

I am convinced that a solution that is often downplayed needs to be considered seriously, and that is shifting our food system to be as close to plant-based and organic as possible. The Oxford Food Study (2018) found that animal agriculture uses 79% of agricultural land, while only producing 18% of the calories. Shifting to a plant-based diet would free up 75% of agricultural land, which could be left to revert to nature, which would store a lot of carbon, and create more biodiversity. It would also reduce methane emissions significantly, as cattle are a huge source of methane.

I think Steven Guilbeault understands at a personal level how important eating plant-based is, as 50% of the dishes at his wedding were vegan, 35% vegetarian, and the other 15% had meat or fish. This was back in 2016, so that was a pretty bold, forward-looking action!

We don't need "fighting the

We don't need "fighting the good fight." We need action, and quick.
"Too often missing targets"??? Did we ever hit even one? Did we ever have a target in line with what was needed?
And where, Iwonder, are these "intact ecosystems"???
There are always compliments and appeciation around and available from somewhere. Doug Ford gets compliments from Joe Oliver, and from all kinds of companies that profit from is egegious tramplings on democracy and the law. Getting compliments and statements of appreciation for being able to come up with a way to save face??? That seems to be the booby prize.

Let's go for the real thing, shall we?