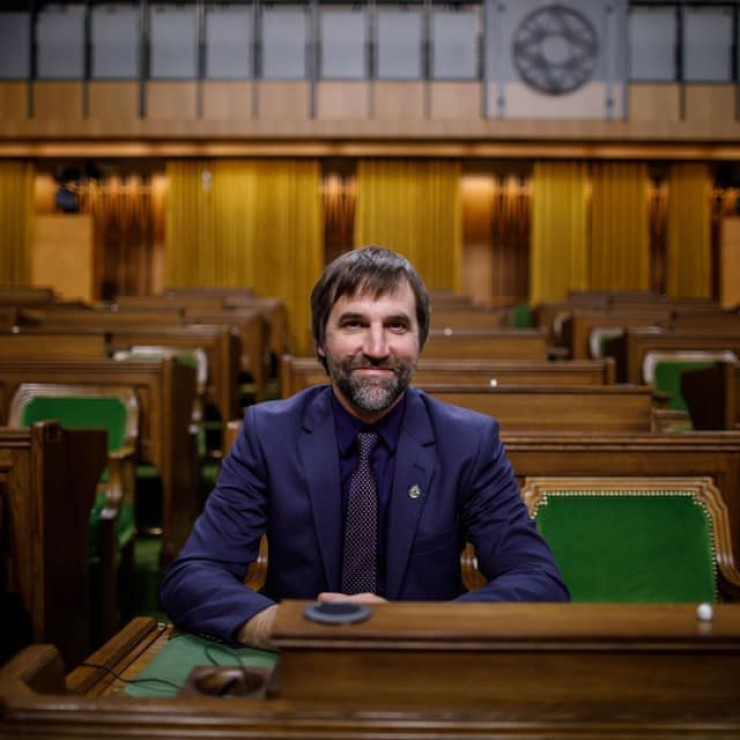 The Honourable Steven Guilbeault was first elected as the Member of Parliament for Laurier—Sainte-Marie in 2019. He is the Minister of Environment and Climate Change Canada, who previously served as Minister of Canadian Heritage.

Minister Guilbeault is a prominent advocate in the fight against the climate crisis, and has been leading the charge from Laurier—Sainte-Marie for years.

Minister Guilbeault’s commitment to environmental issues started at the age of five, when he climbed a tree to protect it from real estate developers who were about to cut down the woods behind his home in La Tuque. Twenty-five years later, he scaled the CN Tower in Toronto to call for Canada to ratify the Kyoto Protocol.

In 1993, Minister Guilbeault co-founded Équiterre, the largest environmental organization in Quebec, and served as its Senior Director from 2008 to 2018. He also worked as a Director and Campaign Manager for Greenpeace, and was a Strategic Advisor for more than 10 years at Cycle Capital Management, a Canadian fund dedicated to the development of clean technologies. Minister Guilbeault also worked for Deloitte & Touche as well as Copticom, a consulting firm specializing in the green and social economy, and transportation.

As an activist and strategic advisor for dozens of governments and businesses in Canada and abroad, Minister Guilbeault is a pragmatist who works to make a difference by building bridges and relationships. An avid cyclist and sportsman, he has been riding his bike 12 months a year for the last 30 years.

Minister Guilbeault is a father of four and stepfather of two.

'It is our boldest step yet, and represents many important firsts in our country’s fight against climate change,' writes Environment and Climate Change Minister Steven Guilbeault.
Opinion, Politics | April 4th 2022

They say that carbon capture and storage has the potential to make a big dent in cutting pollution, while creating sustainable jobs and economic growth across the country.
Opinion | March 14th 2022

The really hard work continues, on 197 domestic fronts around the globe, now that the COP26 delegates have gone home.
COP26: Uniting the World to Tackle Climate Change
Opinion | November 22nd 2021

Opinion: Justin Trudeau should overhaul reviews without cheerleading for pipelines

The minister’s view that it’s time to hit the reset button flows not only from a concern for “due process”, but also from concern for the well-being of a sizeable chunk of Canadian citizenry.
Reports from the Race to a Safer World
Opinion, Energy | September 15th 2016