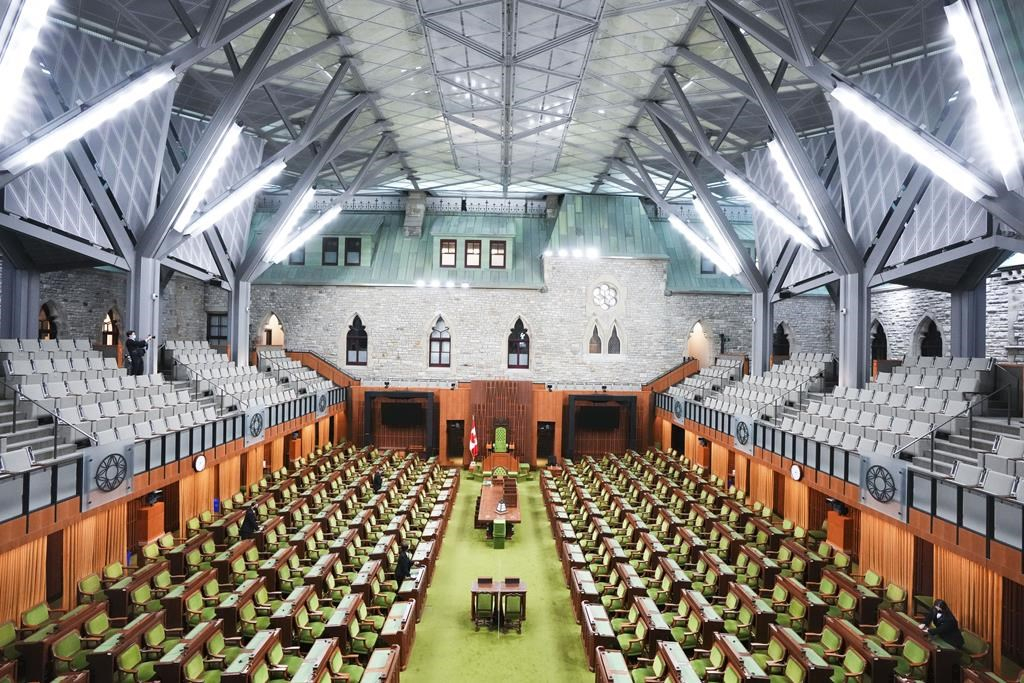 Pages makes preparations in The House of Commons on Parliament Hill in Ottawa, on Friday, Nov. 19, 2021. File photo by The Canadian Press/Sean Kilpatrick
Previous story
Next story

Members of Parliament return to the House of Commons today for the first time in five months.

It's a new Parliament that looks almost identical to the old one, after an election Sept. 20 that saw only a handful of seats change hands and gave Justin Trudeau's Liberals their second consecutive minority.

And it's facing many of the same issues: the ongoing battle against COVID-19, rebuilding the battered economy, climate change, Indigenous reconciliation.

It's likely to face a similar partisan divide as well, with the Conservatives putting up stiff opposition to most Liberal initiatives, forcing the government to rely primarily on the NDP and occasionally the Bloc Quebecois to pass legislation and survive confidence votes.

The session opens today with the election of a new Speaker, followed by a speech from the throne delivered by Governor General Mary Simon in the Senate on Tuesday.

Liberal MP Anthony Rota, Speaker throughout the last session, is widely expected to win re-election after deftly managing to steer the Commons through the first three waves of the COVID-19 pandemic with a new hybrid format that gave MPs the option of participating virtually in proceedings.

But Speaker elections, in which MPs cast ranked ballots, can be unpredictable. Rota is up against three Conservative MPs — Marc Dalton, Chris d'Entremont and Joel Godin — as well as fellow Liberal MP Alexandra Mendes and New Democrat Carol Hughes, both of whom served as deputy speakers in the last session.

Veteran Green MP Elizabeth May is also in the running but she said in an interview Sunday she actually believes Rota deserves to be re-elected. As a candidate, however she gets to make a five-minute speech, which she intends to use to draw attention to what she considers a major error by various Speakers over the past 40 years: allowing party whips to dictate who gets to speak in the Commons, surrendering the Speaker's authority to choose whom to recognize.

Only MPs who are in the House will be able to vote for the Speaker.

But after that, the House will have to decide whether to resume hybrid sittings. Liberals, New Democrats and Greens strongly favour continuation of the hybrid format but the Conservatives and Bloc want the Commons to fully return to normal in-person proceedings.

Because there is no unanimity on how to proceed, the matter will likely have to be put to a vote later in the week.

The new Speaker will also have to deal almost immediately with a Conservative challenge to a decision by the board of internal economy, the all-party body that governs the House, to require anyone entering the Commons precinct to be fully vaccinated against COVID-19.

The issue of Conservative MPs' vaccination status, which dogged Leader Erin O'Toole through the election campaign and beyond, gained fresh urgency over the weekend when Quebec Tory MP Richard Lehoux was diagnosed with COVID-19 despite being fully vaccinated.

Lehoux had attended a two-day, in-person caucus retreat late last week and, under public health guidelines which the party says will be followed, that could mean any unvaccinated colleagues will have to self-isolate.

While all other parties say all their MPs are fully vaccinated, O'Toole has consistently refused to say how many of his MPs have not received two shots. He has said only that all 119 Conservatives will be able to enter the Commons, because they are either immunized or have a medical exemption.

But government House leader Mark Holland suggested Sunday that the Commons needs to adopt a system for verifying the validity of medical exemptions claimed by an unknown number of Conservative MPs.

The legislative agenda promises to be packed, with the Liberals having pledged in their election platform to introduce or reintroduce at least eight bills in the first 100 days of their third mandate. The Commons is scheduled to sit only 24 days before the 100-day clock runs out on Feb. 3.

The government is also planning to introduce two bills not included in the platform that it hopes can be passed quickly: one implementing new, more targeted benefits aimed at individuals and sectors, like tourism, hit hardest by the pandemic, the other aimed at criminalizing harassment and intimidation of health-care workers.

But since they hold only a minority of seats, the Liberals can't necessarily control the agenda. The opposition parties have their own priorities that they intend to push.

"After Justin Trudeau needlessly delayed his legislative agenda with an unnecessary election, it's up to him to develop a collaborative approach in the Commons that includes the perspectives of all parties."

For his part, Bloc Leader Yves-Francois Blanchet has threatened to "unleash the fires of hell" over the current formula for redrawing the country's electoral map to account for population shifts, which would result in Quebec losing one seat.

He's signalled that the Bloc will also pressure the government to cough up an additional $28 billion in unconditional annual transfer payments to the provinces for health care, as demanded by the premiers.

The NDP, most likely to be the Liberals' primary dance partner, also wants to see more generous health transfers and progress on pharmacare and dental care. New Democrats also intend to pressure the government to reverse its decision to end emergency pandemic benefits, ensure the ultra rich pay their fair share of taxes, and take more aggressive action on climate change.