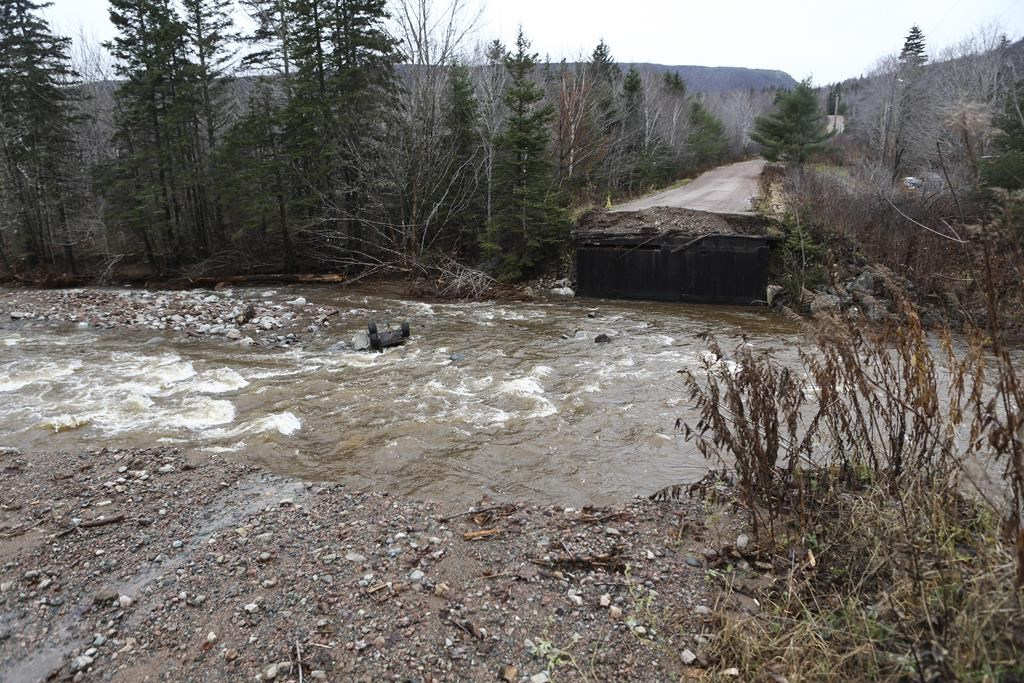 Shortages of bread, milk and other staples were reported Thursday from communities in southwestern Newfoundland left isolated by a storm that dumped almost 200 millimetres of rain on the area, washing out roads and bridges.

And in eastern and northern Nova Scotia, work crews fanned out to pump water from basements and repair roads inundated by torrential rainfall that had hammered parts of Atlantic Canada for three days.

In the coastal town of Port aux Basques, in the southwest corner of Newfoundland, repairs were underway on several roads, including the Trans-Canada Highway, and a helicopter was used Wednesday to rescue some residents trapped in a yurt — a round, tent-like shelter typically made from canvas and large poles.

"There’s no bread in town right now; there's no eggs to be bought; fresh milk is getting low,” Hinks said in an interview Thursday from Port aux Basques. “People are going to the gas stations and gassing up for fear of running out of gas, (but) you can't go anywhere anyway.”

The town has three gas stations, “(but) none of the refuelling trucks can get in … I guess they're going to be drained by next week."

In the nearby town of Codroy, fire chief Brian Osmand said four of the area's roads have been washed out, leaving 14 families stranded.

"We're making the arrangement to make sure their needs are met," Osmand said in an interview as his crew pumped water from the basement of the Hynes Chicken Villa in Tompkins, N.L.

Osmand said the Codroy Valley Volunteer Fire Department, which serves 16 communities, had already pumped out more than a dozen basements on Thursday. The fire chief confirmed that the surrounding communities had missed their regular, weekly shipments of bread, milk and eggs on Wednesday, causing shortages.

"We might be able to airlift staples back into the community," he said.

Nova Scotia Premier Tim Houston said Thursday it would cost at least $7 million to repair the damage, adding the province would apply for federal funds. "There's a lot of work to be done to rebuild, repair, restore." #ExtremeWeather #NSStorms

Osmand said that on Wednesday night, when the storm was at its worst, the rain came down at an unbelievable rate. "It was wicked," he said, adding that it was too windy to use the fire truck.

"We were doing call-outs for the fire department, and there were times we couldn't see a foot in front of us. And it's not because it was foggy — it was just the rain. It was horrible. It's the most rain I've seen, and I'm 61 years old… It was like getting hit by 10 buckets at one time."

Meanwhile, the ferry service that operates between Port aux Basques and North Sydney, N.S., was forced to alter its route because of road closures. Marine Atlantic announced Thursday it would temporarily reroute the crossing to Argentia, in eastern Newfoundland, to ensure people and supplies can reach the province. That route is usually offered only in the summer months.

The storm, described as an elongated area of low pressure, stalled over the region between Monday and Wednesday. Feeding on tropical moisture in the Caribbean, it dumped record amounts of rain on many communities, including Port aux Basques, where 165 mm accumulated over the past two days.

In the Codroy Valley, one weather station recorded 195 mm of rain. As well, a gust in the Wreckhouse area reached 141 kilometres per hour; however, that area is known for producing powerful winds.

In Nova Scotia, almost 30 roads and bridges were closed by the time the rain stopped on Wednesday. Most of the damage was reported in Antigonish County, in northeastern Nova Scotia, and in Victoria and Inverness counties in northern Cape Breton.

Nova Scotia Premier Tim Houston said Thursday it would cost at least $7 million to repair the damage, adding the province would apply for federal funds. "There's a lot of work to be done to rebuild, repair, restore," he said.

Some communities along Cape Breton's northeastern shore received more than 200 mm of rain, and several washouts forced the closure of sections of the scenic Cabot Trail in Cape Breton Highlands National Park.

In Ingonish River, N.S., on the east side of the Cabot Trail, flooding and washouts were reported amid heavy downpours that dumped a record 278 mm of rain on the tiny community. On Thursday, the 15-kilometre section between Neils Harbour and Ingonish remained impassable, leaving both communities isolated.

The washouts are separating the two communities from hospitals, long-term care facilities and the local high schools.

"It's still a very unstable road," said Gourd Robie, the park's asset manager, "A lot of the culverts have aged poorly. They may look intact on the top, but the bottom is non-existent."

Robie said one of the park's employees, Davey Fraser, received minor injuries when his vehicle plunged into a large, dark hole in the road near Little Smokey on Wednesday night.

"It wasn't until our park employee was driving over it that it gave way," Robie said in an interview Thursday. "It looked good from the surface, but underneath it was a different story … (Fraser) is doing remarkably well, given the circumstance."

As for repairs to the road, Robie said he couldn't provide a time frame, but he stressed the park's staff were moving quickly to fix things.

"It's a world-class destination and an iconic route, but it's also the social and economic lifeblood of the communities here," he said. "It's a serious closure and we're doing everything we can to open the road as fast as possible."

This report by The Canadian Press was first published Nov. 25, 2021.

Canada needs to do better at recycling and reusing stuff