The tail end of COP26 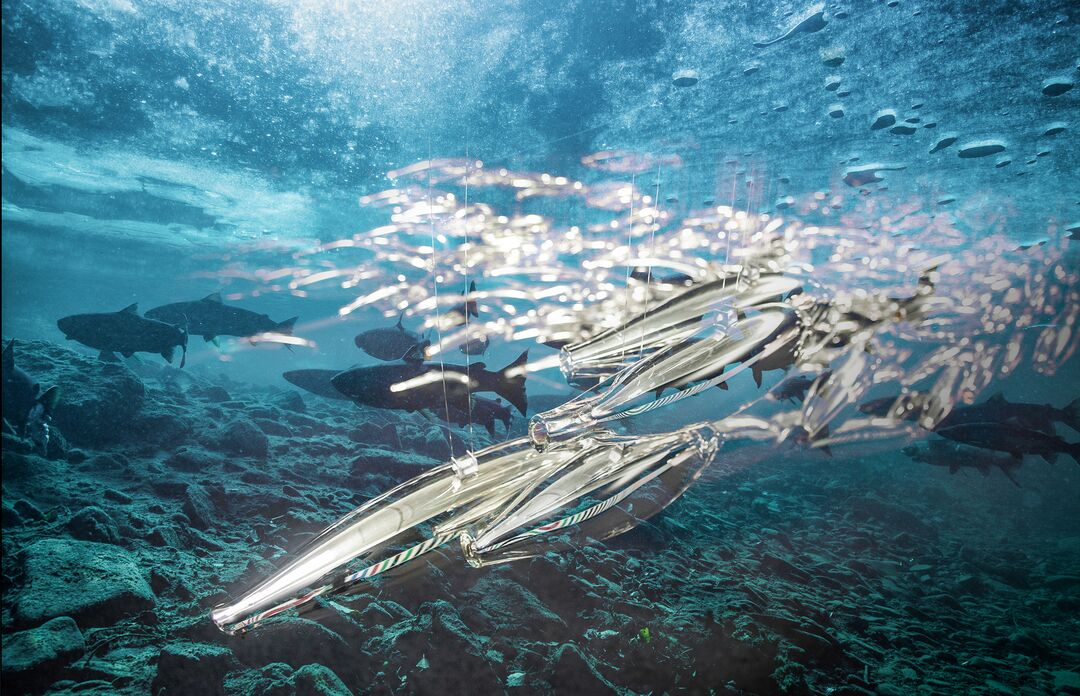 The art installation called Salmon School was inspired by the Skagit River that runs down the West Coast and its dwindling salmon run. Nick Hawkins/Tom Cheney/Joseph Rossano
Previous story
Next story

Above the cafeteria at COP26 hangs a glistening art installation titled Salmon School. Made of more than 500 pieces of mirrored glass and designed by Joseph Rossano, an artist from Washington state, the piece was inspired by the Skagit River that runs down the West Coast and its once mighty, now dwindling, salmon run.

In one of those weird ways in which life imitates art, outside the Glasgow building hosting Rossano’s piece runs the River Clyde, which once also swelled with salmon and whose population has now shrunk to distressingly low numbers.

Inside the UN climate summit venue, sandwiches and salads are advertised as being prepared with “Scottish salmon.” But the ads fail to mention this salmon comes from a pen in the North Atlantic and no longer from Scotland’s rivers.

It’s no surprise that salmon were present at an international conference about climate change. They are foundational to hundreds of communities around the world. Their presence and size are a measure for the health of an ecosystem.

Where I live in British Columbia, salmon are at the centre of the cultural and spiritual life of the Indigenous communities up and down the coast. Unfortunately, they are also under great threat. Without swift action to protect the fragile ancient ecosystems they not only rely on, but also play a huge role in, salmon rivers in B.C. will soon be as barren as the Clyde.

Salmon are a keystone species that is fundamental in holding the web of life together. They are one of the main food sources for bears and orcas, and one of the reasons why B.C.’s remaining old-growth forests are some of the largest in the world. When animals and birds feed on salmon, they tend to leave the bones on the forest floor, and these remains go on to fertilize the towering trees.

I was recently walking in Kwakwaka'wakw territory with Suzanne Simard, author of Finding the Mother Tree. As we followed a trail of salmon bones that had been left on top of moss and roots, she explained that “we should learn to see these as salmon forests.” The marriage of land and sea bound by salmon is arguably the single most significant ecological phenomenon affecting the carbon and biodiversity cycle in the Pacific Northwest.

This means that the reciprocal relationship between forests and salmon cannot be siloed if we are going to act on the climate and biodiversity emergency in an effective way. In other words, we need a watershed approach.

There was a speech by India Logan-Riley that went viral during COP26.

“Hands and minds made this present world and so it is also hands and hearts and minds that can remake it. And it’s Indigenous and front-line communities that are leading this remaking … What we do works. In the face of mediocre leadership, Indigenous Peoples shine through. This is all to say that climate change is the final outcome of the colonial project and in our response, we must be decolonial,” she said to world leaders.

Salmon are at the centre of the cultural and spiritual life of the Indigenous communities up and down the West Coast. Unfortunately, they are also under great threat, writes @Flossbaker. #ClimateEmergency #cdnpoli #BCpoli

One example shining through in B.C. is the concept of salmon parks. This idea was launched by the northern Nuu-Chah-Nulth nations on Vancouver Island to revive and restore salmon populations in their rivers.

What is so special about salmon parks is that every decision made in a watershed must be for the sole benefit of salmon. We know that because of their reciprocal relationship — whatever benefits salmon, benefits forests, and vice versa. This means bad logging practices wouldn’t be allowed in salmon watersheds. And given these forests are huge sequesters of carbon, what’s good for forests is good for our climate overall.

One of the Nuu-Chah-Nulth nations, the Nuchatlaht, are in the process of taking the B.C. government to court to regain their land title. If they win, their transformative vision of land stewardship will become a reality. This project and the upcoming court case were presented at a speaking event in COP26 attended by the Tyee Ha’wilth (hereditary chief) of the Nuchatlaht Jordan Michael.

“There are dire predictions for the future of salmon on the coast … rising temperatures are cooking them in the rivers, and they are a luxury in the supermarket. Heat waves will threaten these fish more and more,” explained Michael.

“We are in the midst of a groundbreaking court case to regain ownership of our territory on Nootka Island. We are pushing the Canadian and B.C. governments to meet their reconciliation commitments. And we’re here to support the fight against climate change,” he said.

For almost two weeks, the rooms of COP26 buzzed with empty platitudes and fake solutions. Nation states and corporations extolled the virtues of “net-zero” schemes that allow countries to offset their emissions. Through all this white noise, the Nuchatlaht Nation title case and the salmon parks vision are changing the conversation about how the arc of justice might bend toward a healthy and life-sustaining future for all who call the West Coast home.

As my Sierra Club BC colleague Mark Worthing says, “We are all salmon forest people. Whether you think of yourself in this manner or not, if you live in the territories known as British Columbia, your entire life is influenced by the ongoing legacy of wild salmon and old-growth forest.”

Looking up at the Salmon School installation, the faces of all of us in the cafeteria are reflected in the fish made from shiny, mirrored glass.

May we remember in time our obligation to salmon and that our fates are tied together.

Florence (Flossie) Baker is lead organizer with Sierra Club BC. Her passion is supporting different communities to engage in building a new story about the future we face.