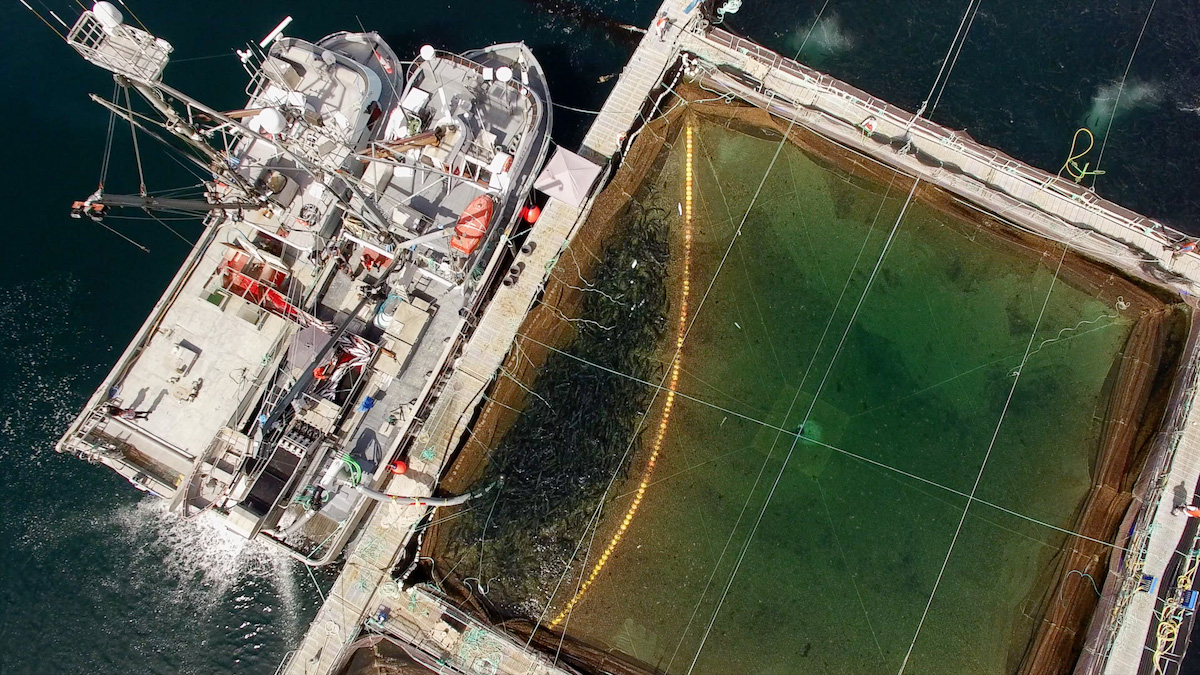 Environmental groups are concerned about new open-net pen aquaculture applications on the B.C. coast. Photo by Tavish Campbell of a fish farm in the Discovery Islands now slated for closure.
Previous story
Next story

A coalition of environmental groups is concerned about the potential expansion of open-net pen salmon farming despite a previous promise by Ottawa to phase them out on the West Coast.

Salmon farming companies have submitted 12 applications — two of which have already been approved — to expand the size or number of net pen operations, and/or to increase the amount of fish produced at sites on the B.C. coast, according to a press release issued by four groups.

One application involves a proposal for a new Grieg Seafood farm with the capacity to produce 4,400 tonnes of Atlantic salmon in Chatham Channel, northeast of Vancouver Island, in partnership with the Tlowitsis First Nation.

The applications are being made despite the Liberal government’s promise to phase out open-net pen fish farms in B.C. waters by 2025, said Stan Proboszcz of the Watershed Watch Salmon Society.

“If the federal government does have a mandate to remove this industry, why would the industry invest in new equipment or operations?” Proboszcz said.

“It doesn’t make a lot of sense. So, that's a key question, both for the industry and the federal government.”

The pending aquaculture applications should be denied by Fisheries and Oceans Canada (DFO) given the exceptionally low returns faced by wild salmon, Proboszcz said.

During the 2019 election, Justin Trudeau promised to end open-net pen farming in B.C. waters by 2025. However, Jordan’s mandate letter issued after the Liberals won stated DFO had to come up with a transition plan by then.

“If the federal government does have a mandate to remove this industry, why would the industry invest in new equipment or operations?” asks environmentalist Stan Proboszcz @WatershedWatch_ about new open-net salmon farm expansion applications. #BC

“We really haven't seen any sort of plan or roadmap for getting to that 2025 commitment,” he said.

“We hope that the mandate letter is explicit about that promise.”

Murray is absolutely committed to phasing out open-net pen salmon farms in British Columbia by 2025, the minister's office said in an email to Canada’s National Observer.

A report on the findings from initial public input sessions on the transition plan was released in July, the ministry said, adding DFO work based on that information and recommendations from Indigenous and stakeholder working groups continues.

Close collaboration with Indigenous communities, the B.C. government, industry, scientists and other stakeholders is key to developing a responsible path forward, the ministry said.

The ministry did not clarify if current aquaculture applications represent an expansion of open-net pen salmon production on the B.C. coast.

“We cannot comment on specific farms or license requests, but the minister will continue to advance the commitment to phase out open-net pen farms, and will consider this commitment when approaching aquaculture management decisions in British Columbia,” the ministry said.

The salmon farm industry was struck a blow in late 2020 when Jordan, citing input from seven First Nations, announced the closure of 19 fish farms in the contentious Discovery Islands region by July 2022.

The farms — near the aquaculture hub of Campbell River on Vancouver Island and operating along the migratory routes of juvenile salmon — were a flashpoint for heated public debate and polarized scientific opinions over the harm fish farms pose to wild salmon.

Before Jordan’s decision, the DFO determined that a number of pathogens from fish farms posed minimal risk to wild salmon.

And the region’s aquaculture companies have launched a court challenge to review the minister’s decision to close the salmon farms.

Mowi Canada West, which had 30 per cent of its production based in the Discovery Islands, recently announced the temporary closure of one of its three hatcheries beginning in May with potentially 17 employees affected.

It’s not clear if the applications to DFO from Mowi, Grieg and Cermaq Canada boost net-pen production overall, or if any of the proposed changes just shift existing production from the Discovery Islands to other regions of the coast.

Responses from the three aquaculture companies were not available before Canada’s National Observer publication deadline.

This article was updated to include comments received from the Ministry of Fisheries and Oceans Canada (DFO).