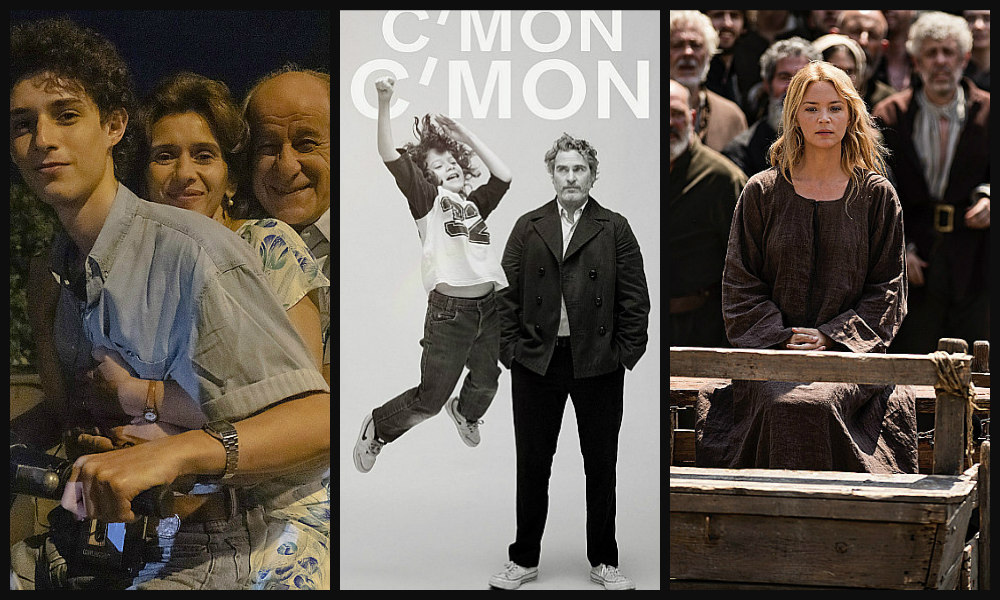 Lots to cover today, but let me mention that one of the best films I've seen recently is accessible again. It's called The Rescue and tells — with interviews, news clips, crisp cinematography and detailed artwork — the ordeal of a boys' soccer team and their coach who were trapped in a flooded cave in Thailand for almost three weeks. Navy Seals didn't know cave diving, but amateurs came from all over (including a Langley man, not mentioned) and did the risky work of getting them out. The suspense is extreme. The film is now on Disney+.

And these are new …

THE HAND OF GOD: Paolo Sorrentino already has an Academy Award and Italy is sending this film to try for another. In it, he does what Kenneth Branagh did with Belfast, go back to the city where he grew up and tell about his boyhood there. That would be Naples, strongly Catholic (hence the title) and soccer-mad, especially when a new player joins the local team, the great Diego Maradona (also, hence the title). I don't know if the boy's story is fiction or fact — he's named Fabietto not Paolo — but the film is alive with the streets, people and families of Napoli.

And in a way, it's a filmmaker's eyes opening to the essentials of his craft. That's expressed in a subplot. While his brother, an aspiring film star, lands an audition with Fellini, and the family repeat-watches a classic (Once Upon a Time in America), young Paolo gets a corrective scold for moaning that nothing ever happens in Naples. A film director points out a list of events and people around him that are real stories if you just look at them that way. Paolo, advised to lose his virginity fast, gets this advice from the not very comely partner he's chosen: Imagine you're with somebody beautiful. Like in the movies? This one has two moods: buoyant in the first half; tragic in the second. It's sprawling and uneven, but its energy will keep you rapt. (Vancity Theatre now, Netflix in two weeks.) 3½ out of 5

C'MON C'MON: Except for a short, this is the first movie Joaquin Phoenix has been in since Joker (2019) and it couldn't be more different. And more welcomed. It's about family and the duties and feelings between parents and children. And the wisdom of children. All that emerges in a story of two people who aren't parent and child at all. They're uncle and nephew, made to travel together by circumstance.

Joaquin plays a radio journalist whose sister, because of a medical emergency, asks him to take care of her son (Woody Norman). He's only nine, but, like a lot of kids these days, is smart, aware and articulate. It's a remarkable performance by the young actor. His uncle spends his time interviewing children about what they think of the future and the state of the world. (He never seems to go into a studio to deliver or produce his items and the station seems to have an unending demand for them. But that's my own background quibbling.) He's based in California and is sent to New York to get more interviews (also a stretch in the business), takes his nephew along and the trip is rewarding for us. The relationship is depicted with sincerity and is sure to move you. The two need each other. The boy is isolated from his ailing father. The uncle seems to be a loner. Together, they develop a close relationship, when they're not mildly arguing or losing each other in a crowd. Montages of those kid interviews act like a Greek chorus in this rich and intelligent film. (5th Avenue, Langley and Coquitlam.) 3 out of 5

BENEDETTA: How do you suppose the man who made Showgirls, Robocop and Basic Instinct would deal with a story about lesbian nuns? You're right. Not subtly. Paul Verhoeven is moved again by his apparent affinity for the lurid and the scandalous. The story he tells is true (check Wikipedia for Benedetta Carlini) and he delivers much talk about faith and piety and the dangers of blasphemy and heresy. He shows us a lot of both.

A nun in 17th-century Italy is attracted into a sexual relationship by a nun who had escaped her abusive father. There are many scenes of the two women, starting with a naked bathing session. And more: gropings during a hymn, snakes slithering around and up, and there's also what is done with a small statue of the Virgin Mary. Jesus himself comes to Benedetta (in visions, I suppose). He tells her she's beautiful and touches her. She develops stigmata. Charlotte Rampling, as the head of the abbey, hears it is self-inflicted and puts her on trial. It's all beautifully staged and filmed. Even when Jesus rides a horse and brandishes a sword. But it seems blasphemous to me. (Vancity Theatre.) 2½ out of 5

TWO AT WHISTLER: The self-described coolest film festival is on in theatres through Sunday and streaming through the whole month. Details here. A few of the 40 features have already been seen around here, including Power of the Dog, Buried and The Card Counter. One, The Hand of God, opens today, and I look at two more from the festival. Both have Indigenous themes.

TZOUHALEM, directed by Harold C. Joe and Leslie D. Bland tells the rest of us about a leader who is legendary among Indigenous people on Vancouver Island.

He was chief of the Cowichan bands in the mid-19th century, a fierce warrior who, it's said, could never be killed. He fought off the Haida and other raiders that attacked from the north (particularly in a marvel of military strategy in the battle of Maple Bay), but then couldn't adjust to peacetime. He was bitter, took many wives by killing their husbands and there are even stories of cannibalism. But as academics, anthropologists and others point out, he's revered as a hero and his story demonstrates clearly that the Salish people had a government with laws before the settlers came. It's a fascinating documentary that also includes re-enacted sequences. (Village 8 Cinema this afternoon and online starting Tuesday.) 4 out of 5

RUN WOMAN RUN also brings us a revered Indigenous figure, but very differently. This is fiction, written and directed by Zoe Leigh Hopkins, who is originally from Bella Bella, B.C. She's part Mohawk and invokes the memory of the great marathon runner Tom Longboat by having him appear as a vision and mentor to a single mom who has lost her dreams and is struggling with her weight. “I just want to go to a world where I feel like I'm winning at life,” she moans. She trains to run a marathon. Tom pushes her when she's ready to give up. She asks him how he survived residential school. “It's in your blood,” he says. That's pretty well the theme of this winning film. (Village 8 Saturday and Sunday, and online starting Dec. 18.) 3 out of 5


THE HUMANS: It's a well-worn genre — family gathers for a holiday dinner, talks and banters and gradually reveals secrets and resentments — but it comes with so much that's new and true you'll be drawn in strongly. If you can put up with the leisurely pace, that is, and the obvious stage origins. It was a Tony Award winner on Broadway for playwright Stephen Karam, who also directed the film. There's a little bit of visual refitting, but it's the strength of the dialogue and the observations about family that make this work. And, the naturalistic acting by the cast.

It's a Thanksgiving dinner for the family, hosted by a daughter (Beanie Feldstein) and her boyfriend (Stephen Yuen) in the scruffy Chinatown apartment they've just rented. Dad (Richard Jenkins) and mom (Jayne Houdyshell, who played the part on Broadway) arrive with another daughter (Amy Schumer) and grandma (June Squibb). Bit by bit, we learn that everybody has a problem: lost job, lost love, artistic stasis, dementia — and for the dad, a big one not revealed until well along. These issues float in and out of the conversations as they do in real gatherings like this. Some are trivial, others are deeply felt and long-standing. A ghost story is told, a surprise emerges and things stay interesting. (Streaming at VIFF-CONNECT.) 4 out of 5

JULIA: She was played by Meryl Streep and parodied by Dan Aykroyd, but here's the real Julia Child, star TV chef and ebullient personality. You get that right from the opening scenes when she introduces the chicken sisters on the counter before her and slaps them. Later, she'll slam one on the table, all part of the gushing, unconstrained manner she showed in her cooking shows. They made her a star, and according to this documentary by Julie Cohen and Betsy West, a society changer. The film argues that she turned Americans on to more adventurous cuisine and away from the fried Spam and jelly salads they were used to.

She went to Paris, when her husband was transferred there, and fell in love with French cooking. It was an eye-opener to her and so she co-authored a book that introduced Americans to it. A Boston interview to promote the book led to a weekly TV feature, which turned into a show and a sensation when it went national on PBS. There would be a falling out later, on a couple of fronts, a new TV gig but never a downturn, it seems, in her mood. Among other things, we learn she was an “incorrigible flirt” and a big eater. She took on social causes too but had her biggest effect on the food habits of Americans. As someone says at the end, “She got the train out of the station.” The food photography is beautiful; the film is entertaining. (International Village.) 3½ out of 5

What David Suzuki will do for love