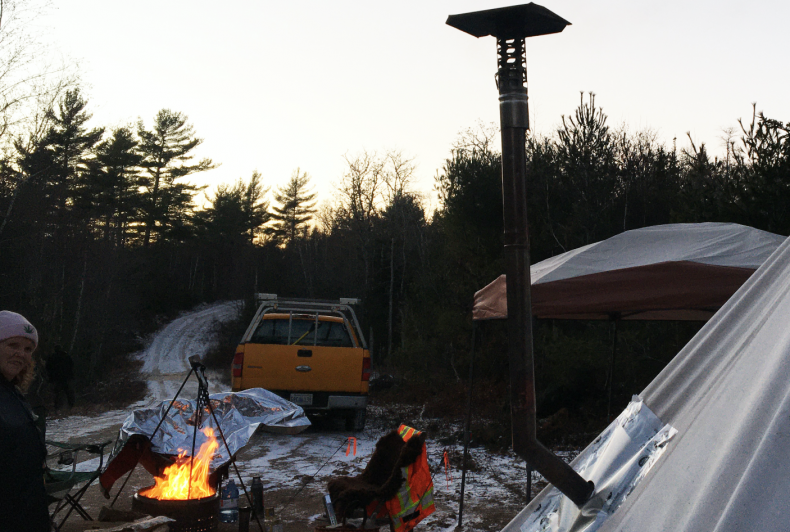 Temperatures have been sub-zero in the Annapolis Valley of Nova Scotia, where Nina Newington has spent the week in a canvas tent with a handful of others determined to save all the trees in a patch of forest nestled between wetlands.

Located on Crown land, the patch in question is set to be logged by WestFor, a forestry group that supplies lumber to 13 mills in the province. When Newington, who was arrested last year during a forestry blockade in Digby County, heard the area was slated for selective logging, she wasted no time getting to the site. Since Dec. 2, she and a few others have slept overnight among oak and pine trees and dozens of others have gathered in support during the day.

They refer to it as the “Last Hope Wildlife Corridor.”

The 80-year-old parcel is relatively small, explained Newington — 60 acres, or around 45 football fields. However, it’s some of the last standing forest in the area, which has seen ample clear-cuts. The trees are important habitat for species in the area, such as the wood turtle and the pine marten.

The endangered mainland moose has been spotted in the area by resident Randy Neily. He notes the same cutblock was actually spared around 20 years ago by Bowater Mersey Paper Company Limited, which owned a pulp mill in Liverpool, a couple of hours away from the site.

“Twenty-two years ago, I talked Bowater Mersey into leaving this patch of forest alone when they were cutting everything around. They left it because of its value to wildlife. Now WestFor wants to take it,” he said.

“Why? It’s a little bit of forest … it’s worth a whole lot more to the wildlife standing than it is to anyone cut down. There’s no reason I can see that they can’t just let it be.”

The company isn’t planning to clear-cut the area, but rather, proposes a shelterwood cut taking 30 per cent of the forest now. As practised in Nova Scotia, shelterwood cuts are usually two-stage cuts — the first round may take a third of the area, the second, in 2-10 years takes the remaining chunk. WestFor has not committed to taking only the 30% then leaving the forest to recover for 30 years before harvesting again.

Canada’s National Observer reached out to WestFor for comment but did not receive a response in time for publication.

The 80-year-old parcel is relatively small at 60 acres. However, it’s some of the last standing forest in the area, which has seen ample clear-cuts. The trees are important habitat for species in the area, such as the endangered mainland moose. #NS

“​​Now, if that were exactly and precisely what they were doing, and they were going to really, truly leave 70 per cent of forest cover, that would be good ecological forestry — if it were being done on a site that should have any logging happening,” said Newington.

“But this isn't that site. This should never have been put up for consideration for harvesting because of its position as a tiny patch of wildlife connectivity between important areas when so much around it has already been clear-cut.”

The camp geared up a couple of days after the release of an evaluation on the state of forestry in the province from William Lahey, president of the University of King's College in Halifax. In 2018, he released what is often referred to as the Lahey Report — a sustainability roadmap for Nova Scotia’s forestry industry.

However, three years later, the author said clear-cut logging still abounds and that there has been no change in how forestry is actually handled in the province. Part of his initial set of recommendations was for forests to be divided into sections — a triad model — with accompanying logging rules, including one designation for protected forests that shouldn’t be logged at all.

The camp got the attention of the MLA for the area, Carman Kerr, who is also the Liberals’ forestry critic. He said he has heard from numerous people in the region, as well as across the province, who are concerned about the cut and the wildlife within it.

“In light of the current climate and biodiversity crises, I too believe that this cut should not happen, at least not until the Lahey Report recommendations can be fully implemented and the department can determine where this parcel best fits into the new triad model,” he said.

“We must do better when it comes to protecting our forests and the wildlife they support. I will continue to push this government to move quickly towards a new model of forestry that focuses on the ecological value of our forests while ensuring that the forestry sector continues to be an important part of our rural economy.”

Amid uncertainty in Beals Brook in Annapolis County, Newington remains optimistic. She said even with 80 km/h winds keeping her and the other campers up throughout the night, spirits have remained high.

“Even when it's tough in those ways, it feels so good to actually be doing something concrete and getting in the way of what's damaging the Earth,” she said.

“Calling out the nonsense that's being put around. You get good company, the people who are willing to do this ... but it also just feels good to not keep on being spun by the industry and delayed… Just get in the way and say, 'No, this is stupid. Stop this.'”