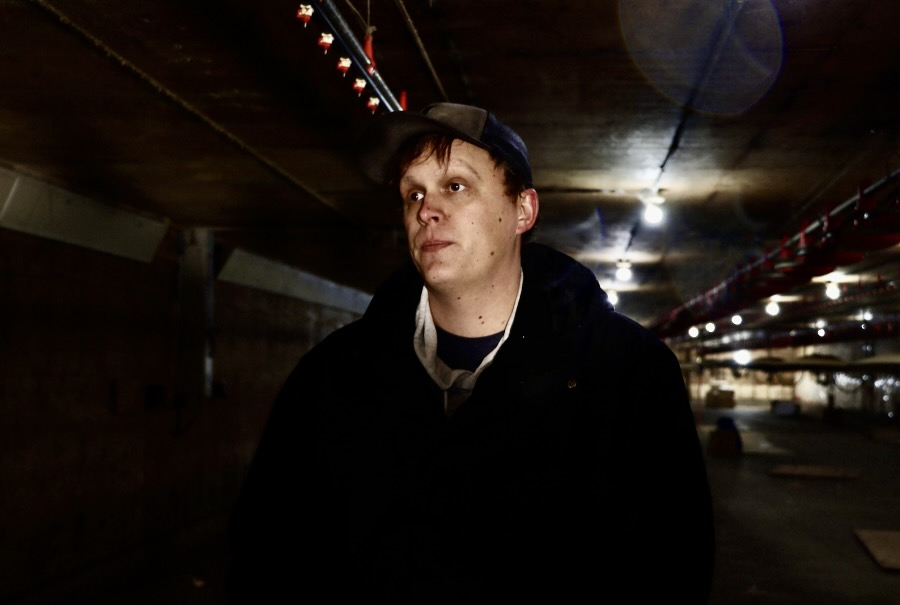 Poultry farmer Jeff Spitters is racing to get his Abbotsford, B.C., farm back on its feet weeks after floods devastated his barns. Photo by Marc Fawcett-Atkinson / Canada's National Observer
Previous story
Next story

Jeff Spitters' shoulders relaxed the moment he pushed open the wooden door Friday on the second floor of one of his barns to a cacophony of chirps emanating from dozens of custard-yellow chicks scurrying across fresh-smelling sawdust.

"These birds are 24-hours-old," explained the Abbotsford, B.C. chicken farmer with understated pride. Only a few weeks earlier, his farm was submerged under unprecedented floods that hit B.C.'s Sumas Prairie last month. The chicks are one of the first generations to grow up entirely at the farm since the disaster struck.

"Our focus (since the flood) has been on our animals, on rebuilding, on ensuring we have a product for consumers," Spitters said. Barely a week has passed since the waters fully receded.

Outside the warmth of the barn, traces of the disaster are everywhere. Stains scar the plywood lining the walls on the first floor of every barn while a worker hoses silt and muck off a concrete path through the farm. Mashed-up zucchinis from a nearby farm are scattered across the front yard.

It's a scene mirrored at farms and nurseries across hard-hit regions in recent days as farmers start the monumental task of cleaning up B.C.'s agricultural heartland.

Over half of all dairy and poultry eaten in the province comes from the fields, barns, and pastures near Abbotsford. Most were submerged for days — even weeks — during last month's floods, causing damage the BC Agriculture Council estimated will cost farmers hundreds of thousands of dollars.

"Farmers have fed us for years and years," said Agriculture Minister Lana Popham during a tour of Spitters' farm with her federal counterpart Marie-Claude Bibeau. "Now it's time for us to help them back to make sure they continue to (feed us)."

Last month, the federal and B.C. governments pledged to match donations made to the Red Cross up to Nov. 26 in support of flood victims, and several agricultural commodity groups have also implemented emergency relief programs. More help will be coming to get farmers back on their feet, Bibeau and Popham said Friday.

"There is a light at the end of the tunnel — there is hope for farmers to get back. It's devastating, (but) as horrible as it is, we're resilient," said Abbotsford farmer Jeff Spitters. #BCFloods #Agriculture #ExtremeWeather

"We both heard the commitment from (farmers), who are literally standing in mud, that they just want to figure out a way to fix it and get back to doing what they love," Popham said.

Spitters knows that determination well. Leaning against the plywood wall as chicks scurried by his feet, he recalled the exhausting period at the peak of the flood. For days, he waded through cold, dirty water alongside family, friends, and staff volunteering their time to keep his flock watered and fed. Even as the home he shares with his wife and 11-year-old son festered in the floodwaters.

"This doesn't just affect us on a business level. These are our family homes. These are the places that we've raised our families, that we've grown up," he explained. Giving up wasn't an option.

Still, it would have been nearly impossible to recover so vigorously without support from neighbours, friends, farm workers, and others. Help poured in when it was needed most — generosity Spitters said he is doing everything he can to reciprocate.

"The reason we're here is our community," he explained as he glanced over his flock. "There is a light at the end of the tunnel — there is hope for farmers to get back. It's devastating, (but) as horrible as it is, we're resilient ... and we'll be back farming."

Farmers are famous for their

Farmers are famous for their stubbornness. Flood waters however are likely to have he last laugh. Just how much toxicity is now lodged in the flooded fields and how long will it take to neutralize it? If it can even be done. Watersheds, groundwater, surface water is no doubt contaminated. What water is available for people or animals? B.C. farmers are not out of the woods and thanks to the fires, the clear cutting, mountains will continue to wash away and uncontrollable floods will overwhelm valleys - until the mountains can be replanted. Another generation away?