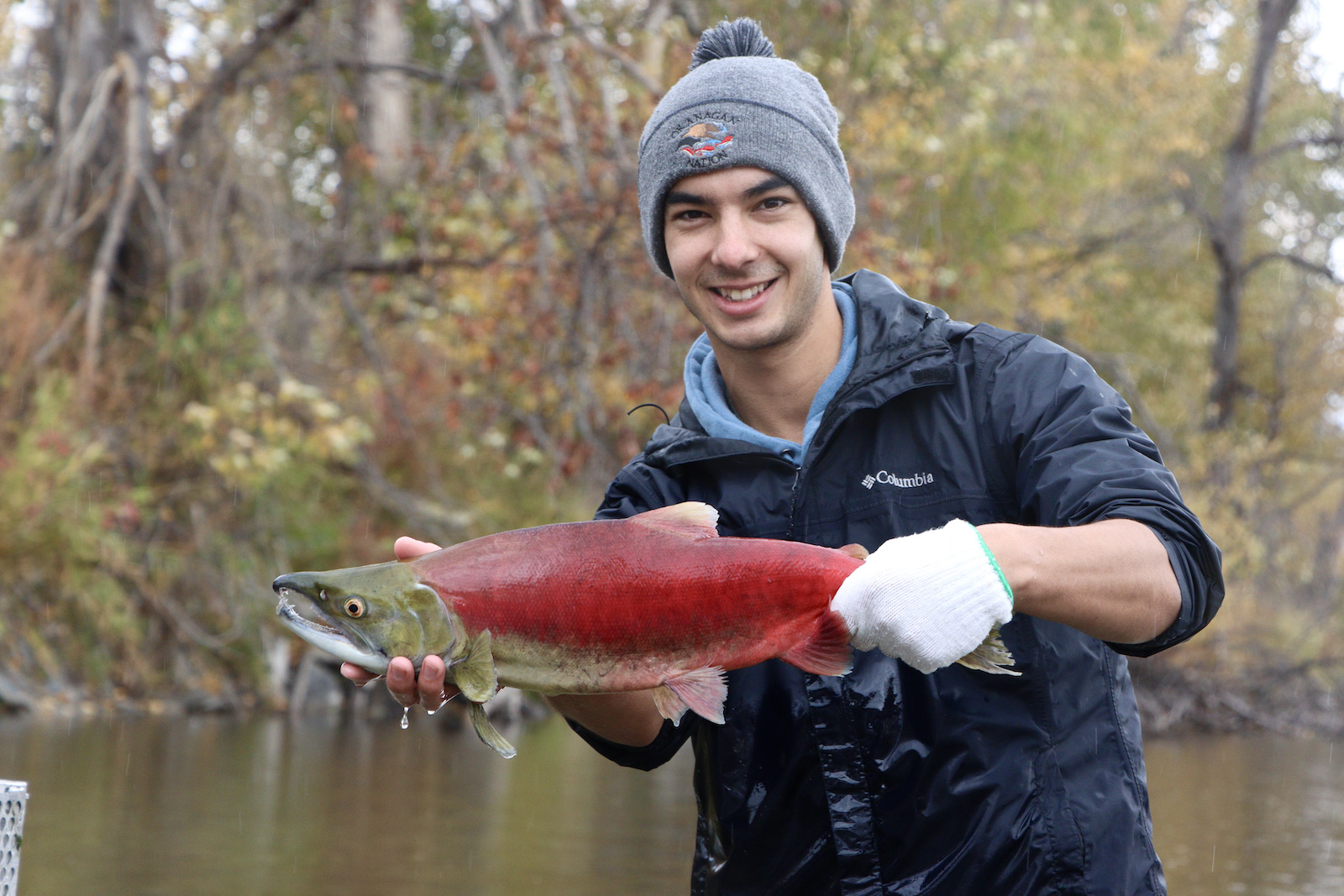 Tyson Marsel parked his truck in a field abutting B.C.'s Okanagan River, stepped into a pair of rubber hip waders and walked out into the smooth, frigid waters in search of salmon sperm.

Dozens of male sockeye salmon heading upriver to spawn had been captured in holding pens earlier in the day by staff at the Okanagan Nation Alliance's (ONA) kł cp̓əlk̓ stim̓ fish hatchery, where Marsel works. Grabbing a fish, he explained that each salmon could produce enough milt, or salmon sperm, to inseminate hundreds of eggs back at the hatchery in a successful effort to rebuild wild populations to levels capable of sustaining the Syilx Okanagan.

The salmon stayed calm in his hand as he walked it to shore and next to a co-worker waiting on the riverbank, a small plastic takeout container in hand. Holding the fish by its tail, Marsel gently massaged its crimson belly until it released a jet of milky milt into the waiting container.

"(We're) making babies," he chuckled as he walked the salmon back down the riverbank and let it swim away.

For most of the past century, wild salmon — babies or adults — were a rarity in the Okanagan's rivers and lakes. Overfishing and habitat destruction from logging and farming decimated the fish from the mid-1800s onward. By the 1930s, a series of dams built along the Okanagan and Columbia rivers had all but extirpated salmon from the region.

The loss was a devastating blow to Syilx Okanagan people, who relied on salmon for food and cultural purposes, said ONA Chief Bryon Louis.

"In places, it was close to 90 per cent of the diet that came from salmon," he explained, referencing DNA analyses archeologists conducted on ancestral dental records with the nations' permission. Not only did the loss of salmon impact people's access to an important source of nutrition, it helped erode important traditional practices from daily life.

"Since we weren't able to be on the river system doing these types of practices, we had lost traditional knowledge associated with over, potentially, two or three generations."

Tyson Marsel parked his truck in a field abutting B.C.'s Okanagan River, stepped into a pair of rubber hip waders and walked out into the smooth, frigid waters in search of salmon sperm.

For instance, he recalled the first time the kł cp̓əlk̓ stim̓ fish hatchery helped produce enough salmon to sustain a modest harvest, fishers for the nations didn't know to bleed their catch. Bleeding is a crucial step that gives the flesh a better taste, Louis explained, but the proper techniques hadn't been passed down across generations because no one had fished salmon locally for decades.

While the Syilx Okanagan had pushed for decades to restore the salmon, it wasn't until the late 1990s that their efforts started to pay off, Louis explained. It was around then that ONA partnered with Indigenous governments in the U.S. to research how to bring the fish back into their waters — and pushed officials on both sides of the border to support those efforts.

Restoring the riverbed and natural meanders (fish love bends in the river), building fish passages around obstacles like dams, and ensuring governments kept water levels in the Okanagan and the Columbia high enough to sustain healthy fish populations were essential, he explained. These improvements alone weren't enough to bring back the fish, so in 2014, ONA opened the kł cp̓əlk̓ stim̓ hatchery to help the efforts further.

"We went from one year in the 1990s when there were only 600 adult salmon that returned to the Okanagan system … to having (about) 200,000 sockeye return back to the spawning grounds," he said.

"All of a sudden, fish started coming back," recalled Marsel as he waded through the river with another fish. "It was pretty awesome … for the community and for people to see that."

Reaching the riverbank, Marsel emphasized that the salmon's return has had cascading benefits. The conservation efforts have built up fish stocks to a level where people can fish for food, ceremonial, and cultural reasons. In 2016 alone, ONA members harvested about 13 000 sockeyes. Yet while his community's enthusiasm for the returning salmon is part of what motivates Marsel to wade into freezing cold water for hours on end, it's not the only factor.

"I like fish. And (now) I'm always working with fish," he laughed.

By Mia Rabson | News, Politics | December 22nd 2021
Reports from the Race to a Safer World

Born in the Okanagan (at the

Born in the Okanagan (at the south end of Okanagan Lake) a long time ago I remember the "benches" with blue apples on all of the trees. The blue was DDT sprayed onto the fruit. The DDT obviously washed into the lake and down the Okanagan river each year. Everything disappeared. What I mean by that is the thousands of insects that flew up out of the grasses in the orchards as you walked in, the rattlesnakes that could be seen all over and of course the fish in the lakes and streams. My mother, a registered nurse, often warned me not to eat the apples until she had washed them thoroughly. I believe that this "spraying" is the major contributor to the loss of the salmon and should be re-discovered and reported on.