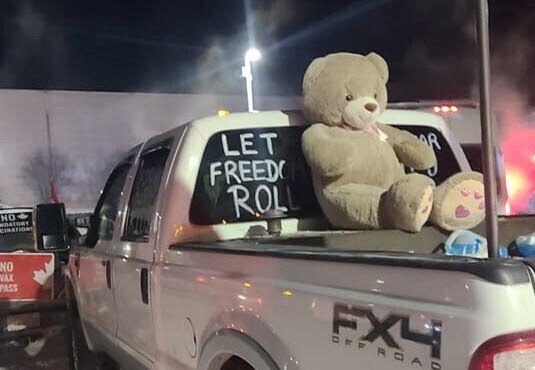 Conservative MPs are stoking the anti-vaccination fire by voicing support for a convoy of truckers driving across Canada to converge on Parliament Hill.

Conservative Leader Erin O’Toole refuses to say whether he supports the convoy, but his MPs have no such qualms: at least four — including former party leader Andrew Scheer — have tweeted their support for the truckers.

Participating truckers want to show their opposition to COVID-19 vaccine mandates, which prevent them from crossing the border, and plan to take their protest to Parliament Hill at noon Saturday, according to a countdown clock from the anti-public-health-mandate group Canada Unity, which is organizing the event.

Although the participants are long-haul truckers, the convoy is emblematic of a greater political divide between a centrist federal government and the western separatists helping to co-ordinate the convoy.

Tamara Lich, secretary for the Maverick Party — formerly known as Wexit Canada — is behind a GoFundMe campaign for the convoy. Maverick is an Alberta-based federal party that has pushed for the western provinces to separate from Canada and create a “western nation.”

As of Jan. 26, nearly $5.4 million has been donated to the fundraiser for the so-called “freedom convoy,” but the funds are currently frozen while GoFundMe verifies how the money will be distributed, a spokesperson from the crowd-funding platform told Canada’s National Observer in an email.

The GoFundMe description says donations will go towards fuel and possibly food and lodgings “to help ease the pressure of this arduous task.” A GoFundMe spokesperson said the platform is “following our standard verification process and working directly with the campaign organizer to ensure the funds are distributed as stated.”

Part of the protest involves a proposed memorandum of understanding (MOU) that would have Gov. Gen. Mary May Simon and the Senate create a committee with Canada Unity to override all levels of government and roll back vaccine mandates. If Simon and the Senate refuse to form a committee, the MOU says they should “resign their lawful positions of authority immediately.”

The document currently has 165,000 signatures, however MOUs are non-binding and carry no weight. Kerry Bowman, a bioethicist and assistant professor at the University of Toronto, said the main goal is to “really push to create a social movement.”

On Tuesday, the Maverick Party’s interim leader, Jay Hill, clarified the party’s position in a statement, saying: “(The) Maverick Party is not directly involved in the ‘Freedom Convoy,’ although some Maverick members and supporters have chosen to support the convoy.”

Conservative MPs including @AndrewScheer have voiced their support for a convoy of truckers driving across Canada to protest vaccine mandates at Parliament Hill this Saturday. #cdnpoli #TruckersConvoy2022 #COVID

The Canadian Trucking Alliance has denounced the planned protests in a statement and noted the “vast majority” of truckers are vaccinated.

Canada Unity is a driving force behind the protest and disseminates information to participants on its website and Facebook page, where it regularly shares anti-vaccine posts and other disinformation, including memes comparing vaccine mandates to segregation.

Some Conservative MPs have taken a similar line.

Earlier this week, Scheer tweeted his support for unvaccinated truckers and called Prime Minister Justin Trudeau “the biggest threat to freedom in Canada.”

Thank you Truckers! Trudeau is attacking personal liberty and threatening everyone's ability to get groceries because of his overreach on vaccine mandates. He is the biggest threat to freedom in Canada.https://t.co/5b5k5ZjuY3

In a video posted to Twitter, Alberta MP Martin Shields said exceptions to the vaccine mandate or measures like rapid tests should be made available for essential workers who move goods across the Canada-U.S. border, echoing O’Toole’s similar assertion that Canada should accommodate the unvaxxed during the Omicron wave.

"Let's support the truckers, and I'll be happy to meet with them here in Ottawa," Shields said in a video shot in front of the Centennial Flame.

I am in Ottawa awaiting the trucking convoy on its way to the capital. Canadian supply chains are critical and the Trudeau Liberal government’s mandates and freedom-curbing restrictions have gone on too long. It’s time to get our freedoms back. #cdnpoli pic.twitter.com/LAl956dN0V

On Tuesday, federal Transport Minister Omar Alghabra took aim at Conservative MPs spreading misinformation about grocery supply chains and assured Canadians that the small minority of truck drivers refusing to comply with a vaccine mandate to cross the Canada-U.S. border will not cause food shortages. So far, the vaccine mandate has had “no measurable impact” on the number of trucks crossing the border, Alghabra said.

On Jan. 22, the U.S. mandated all essential foreign travellers, including truck drivers, who cross American land borders to be fully vaccinated.

Wow! We really dodged a

Wow! We really dodged a bullet when Andrew Scheer lost the election. How weasely of him!
The Conservative Party's willingness to go down the toxic American right-wing road with this issue is really disturbing.

It occurs to me that people who refuse the vaccine are like draft dodgers in WW2. "You go fight Hitler. I'll relax at home. My body, my choice." They may be worse because there is no downside to getting the shots.

Now, compared with Max Fawcett's opinionated article, Natasha provides researched journalism. Though the term "disinformation" is a rather slippery word to use these days - one never knows whether "dis or dat"

I think the article's key

I think the article's key sentence is at the very end: "On Jan. 22, the U.S. mandated all essential foreign travellers, including truck drivers, who cross American land borders to be fully vaccinated."
So, what is this convoy supposed to be about, again? It doesn't matter what the Canadian policy is, Canadian anti-vaxxer truckers are not going to be able to cross the border.