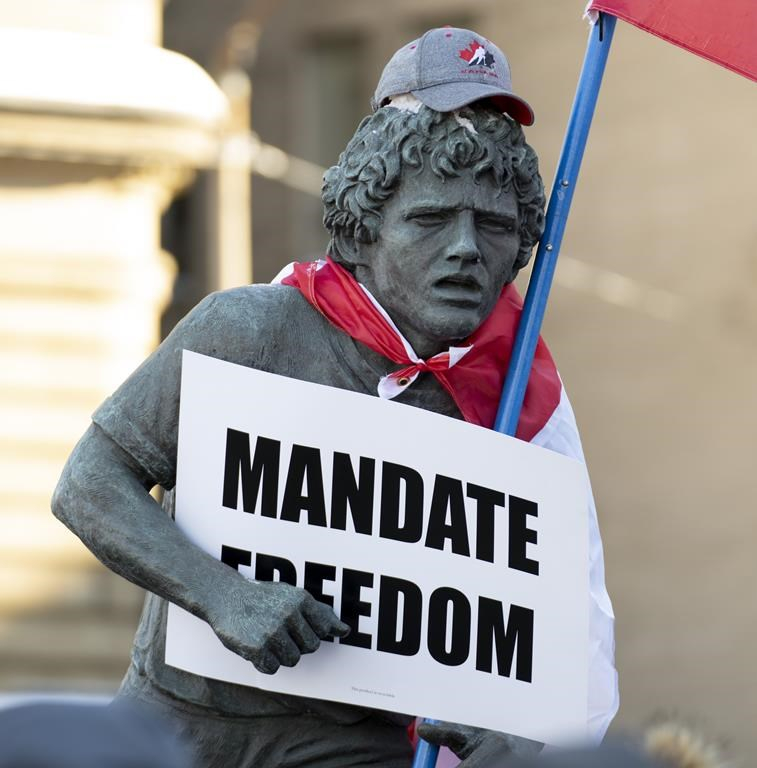 A statue of Terry Fox is decorated with a Canadian flag, protest sign and hat as protesters participating in a cross-country protest against vaccine mandates. Photo by: The Canadian Press/Adrian Wyld
Previous story
Next story

Some protesters jumped on the Tomb of the Unknown Soldier and others fastened an inverted Canadian flag to a statue of Terry Fox as they decried vaccine mandates in the nation's capital on Saturday.

Their actions prompted a chorus of condemnation from public officials and online observers, who denounced the "desecration" of the monuments to Canadian heroes by some of the thousands who descended on Ottawa for a protest against COVID-19 measures and the Liberal government.

"I am sickened to see protesters dance on the Tomb of the Unknown Soldier and desecrate the National War Memorial. Generations of Canadians have fought and died for our rights, including free speech, but not this. Those involved should hang their heads in shame," said Gen. Wayne Eyre, chief of the defence staff.

A video posted on Twitter by Steven Thornton, director general at the Department of National Defence, shows people pumping their arms and chanting "Freedom" at the National War Memorial, including one person apparently standing atop the tomb.

"After explaining to these less than fine Canadians of the hallowed grounds upon which they (trod), this was their reaction in the name of Freedom," he wrote.

Ottawa Police said they had towed several vehicles parked at the memorial earlier in the day.

"The Tomb of the Unknown Soldier and National War Memorial are sacred sites for our country. I urge all Canadians to treat them with solemnity, out of respect for those who have fought and died for Canada," Defence Minister Anita Anand tweeted. "The behaviour we're seeing today is beyond reprehensible."

Some were also outraged by the alterations to the Terry Fox Memorial Sculpture, a bronze statue near Parliament Hill that honours the young cancer patient who ran across Canada in 1980 to raise money for research before his death at age 22.

Brad West, mayor of Fox's hometown of Port Coquitlam, B.C., said touching a statue of Fox is "one of those things that you just do not do."

A sign reading "Mandate Freedom" was also affixed to the statue, and — in addition to the inverted flag — a second Canadian flag was tied like a cape around the statue's neck.

West said Port Coquitlam is proud to be the cancer research activist's hometown, and residents are livid that someone touched his statue.

"If Port Coquitlam was closer to Ottawa, I would have jumped in my truck and drove over there and torn that crap off the statue myself. And I think that's the feeling that a lot of Canadians have," said West, who tweeted that the poster and flags should be removed immediately.

The Terry Fox Foundation was among those to respond online.

"Terry believed in science and gave his life to help others," it wrote, saying the foundation continues Fox's mission of funding cancer research.

James Moore, national co-chair of the Canadian Cancer Society and former minister of industry under Stephen Harper, also spoke out.

"Terry Fox died of cancer that he exacerbated on his Marathon of Hope running across Canada trying to raise money to fight a deadly disease — quite the opposite of what’s happening here. Have a protest, do your thing, don’t disrespect this monument of a Canadian hero," Moore tweeted.

This report by The Canadian Press was first published Jan. 29, 2022.

—with files by Brett Bundale in Halifax.

Changes in a democracy are

Changes in a democracy are brought forth by all parties debating such changes in Parliament, not by unruly, bullying vocal fringe groups. Time to bring in the water cannons and the riot control squads!