'It's time for a reckoning,' says defiant O'Toole in face of leadership challenge 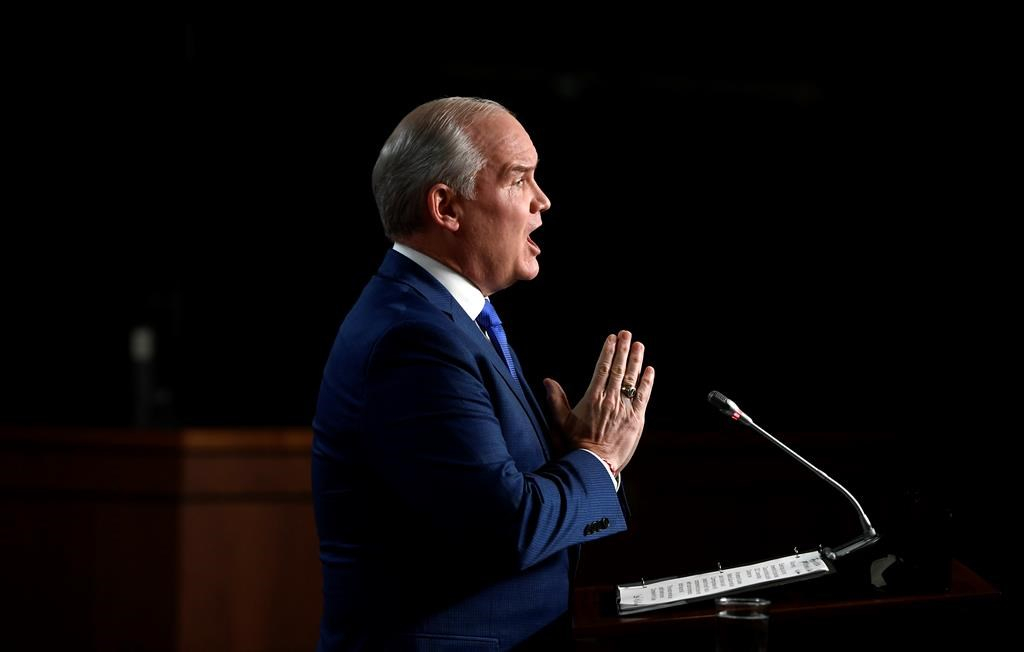 Leader of the Opposition Erin O'Toole speaks about climate change during an announcement at an event in Ottawa, Thursday April 15, 2021. Photo by: The Canadian Press/Adrian Wyld
Previous story
Next story

He turned to social media late Monday after a group of his MPs submitted a letter to the party's caucus chair to hold a leadership review.

In response to what one former caucus supporter said was one-third of his MPs wanting him gone, O'Toole posted: "I'm not going anywhere."

He wrote that MPs who want him out are confused about what direction to take the Conservative party--which has been a source of concern under O'Toole's tenure.

O'Toole said there are two roads for the Tories to take. "One is the road of Randy Hillier and Derek Sloan," he says. "It is angry, negative, and extreme."

The other road, he writes, is about building a more inclusive party and recognizing the need to change, which has been O'Toole's message since taking the reins of the party in 2020 and again after last year's election loss.

"It’s time for a reckoning. To settle this in caucus. Right here. Right now. Once and for all," said O'Toole.

Wednesday is when caucus is set to meet next. Conservative caucus chair and Ontario MP Scott Reid informed MPs Monday evening that he had received written notice with signatures from at least 20 per cent of members requesting O'Toole's leadership be reviewed.

He said information on a vote, which would have to happen by secret ballot, would be provided within the next day.

The process MPs are following is outlined in the Reform Act, which gives a party's caucus the ability to trigger a leadership review.

"It's time for a reckoning," says defiant Erin O'Toole in the face of a call for a leadership review from a group of MPs. #cdnpoli

After last year's election loss, the Conservative caucus gave itself the power to vote on O'Toole's leadership — a measure the leader described as a welcome exercise in accountability.

Alberta MP Garnett Genuis, who serves as O'Toole's critic for international development, revealed Monday he was among the signatories.

That represents a major shift, as only four months earlier Genuis urged other Conservatives to unite behind O'Toole following his elect defeat.

Now, Genuis says in a post, about one-third of the Tories' 119-member caucus "signed a letter calling for an end to Erin O'Toole's leadership, representing a broad cross-section of opinion."

He also said he didn't initially plan to say that. Genuis said he felt compelled to do so after what he calls attempts by O'Toole's office to "smear" him by telling reporters he was spearheading the effort because he was unhappy about O'Toole's decision to fast-track a government bill banning conversion therapy for LGBTQ Canadians.

The MP, who hails from the social conservative wing of the party, had been a vocal opponent of an earlier version of the legislation in Parliament's last sitting before last year's election.

"This is the kind of division that is tearing at our party and it must come to an end. We need leadership that unites instead of divides."

The drama that unfolded Monday has been the culmination of weeks of tension and frustration brewing behind the scenes with O'Toole, who won the leadership in August 2020.

In an earlier statement on social media, Alberta MP Bob Benzen, who supported O'Toole in the 2017 and 2020 leadership contests, said the leader has flip-flopped multiple timeson party policy and believes it's time for caucus to review his fate.

"I feel that the Conservative caucus has given Mr. O'Toole more than enough chances for a course correction to resolve the concerns of many of the grassroots members of our party," his statement reads.

"I believe a caucus leadership review is the only way to avoid a dangerous split in the Conservative party that may not be repairable."

Trouble has been stirring for O'Toole since last year's election loss. The calls from within the party to put his leadership to the test follows last week's two-day caucus retreat where MPs were presented with the findings of a review into what went wrong in the campaign.

Even before that, O'Toole had been facing pressure from some in his caucus to adopt a tougher stand against a controversial secularism law in Quebec. Some from the social conservative faction of the party also expressed concerns with last fall's vote on banning conversion therapy.

Even before the election there were grumblings. In an effort to broaden support for the Tories and modernize the party, O'Toole embraced a carbon pricing system after promising to repeal the Liberal government's carbon tax.

Earlier Monday, the party's electoral district association for Battlefords-Lloydminster in rural Saskatchewan announced it had launched a petition to scrap what it calls 'O'Toole's carbon tax.'

The riding's MP, Rosemarie Falk, said in a statement she supported the petition.

Calls for O'Toole's leadership to be reviewed early had been coming from the grassroots for several months. In recent weeks, at least three riding associations have requested the party's national council hold an leadership review by mid-June instead of waiting until 2023 when the next national convention is scheduled.

Last year, O'Toole kicked Conservative Sen. Denise Batters out of his national caucus for launching a petition to force the party to review his leadership this year.

Although he removed her from national caucus, the Tory Senate caucus as well as the Saskatchewan regional caucus, he decided to keep her in the fold.

O'Toole says when it comes to his leadership, he will accept the caucus's vote.

"The signers of this letter must accept it, too. They brought it. They’ll have to live with it."

PM Trudeau has these words for Ottawa protesters: 'We are not intimidated'