Ottawa police chief calls anti-vax-mandate protest a siege, 'different in our democracy than any I've ever experienced'– Police Act inadequate to handle it 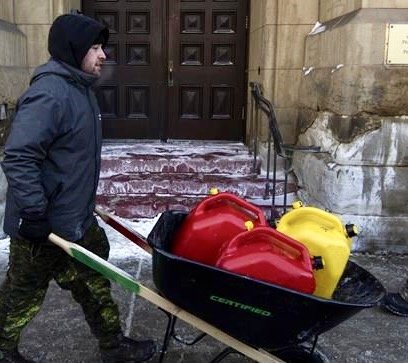 People wheel wheelbarrows of fuel containers for refuelling trucks past the Office of the Prime Minister and Privy Council as a protest against COVID-19 restrictions continues into its second week, on Feb. 5, 2022. Photo by The Canadian Press/Justin Tang
Previous story
Next story

Protesters opposed to vaccine mandates and other COVID-19 restrictions held rallies in cities across Canada on Saturday in a show of solidarity with a week-long demonstration in the national capital, while the effort to end the newly re-energized protest in Ottawa shifted gears to the legal arena.

Clusters of demonstrators faced off against each other after counter-protesters descended on downtowns in Ottawa, Toronto, Quebec City and Vancouver, with scattered arguments breaking out between groups as police worked to keep yelling matches from escalating further. Hundreds of participants also gathered at rallies in cities ranging from Fredericton to Victoria.

Ottawa police chief Peter Sloly said more than 1,000 vehicles and at least 5,000 protesters jammed the city core Saturday, along with 300-plus counter-demonstrators who oppose a protest that has been rebranded by critics, including a lot of frustrated downtown residents, as an occupation.

Sloly, however, had a different term in mind when he addressed a hastily called meeting of the city's Police Services Board late Saturday afternoon.

"This is a siege," he said. "It is something that is different in our democracy than I've ever experienced in my life ... And we don't have a Police Act that can adequately or effectively address this circumstance."

At midday Saturday, a wash of demonstrators mingled near wood fires and barbecues on the snow-plastered lawn in front of West Block, home to the House of Commons. Participants roasted hotdogs and doled out baked goods under tarps warmed by portable heaters, while two men on horseback traipsed through the town, one carrying a flag in support of former U.S. president Donald Trump.

Northbound streets were clogged with vehicles, including many big-rigs, as far as the eye could see. Few if any police were visible except for the few blocks immediately south of Parliament Hill. An open fire burned in one intersection, and a fast-food sandwich restaurant was jammed full of maskless patrons. Protesting truckers doled out hot snacks at a pop-up food table in the middle of another intersection.

Earlier in the day, counter-protesters assembled outside Ottawa City Hall across from the truckers' encampment in downtown Confederation Park.

"Everyone expects it to be a nice safe event. However, there still is that underlying danger for any visible minorities, any people in the LGBTQ community," Ottawa resident Mackenzie Demers said of the relatively quiet gathering he helped organize. "These occupiers, they are dangerous."

A battle of signs also emerged, with those emblazoned with "Freedom" sparking written retorts such as, "Your freedom means a right to win a Darwin award," and the quintessentially Canadian: “Go home please."

Meanwhile, an Ontario Superior Court judge held off on ruling on a request to order truckers in the national capital to stop blowing their horns.

Justice Hugh McLean said Saturday he wants to give all sides in the lawsuit time to fully submit documents, adding that he plans to make a ruling on Monday afternoon.

Ottawa lawyer Paul Champ filed a proposed class-action lawsuit Friday on behalf of thousands of residents seeking millions of dollars in damages and an injunction "prohibiting the continuation of the nuisance." The statement of claim names protest organizers Tamara Lich, Patrick King, Chris Barber and others as defendants.

All police were on duty in the capital, mainly downtown, Sloly said, adding that the police force was never designed to deal with a "city under siege" and that officers on duty for nearly two weeks straight are buckling under the strain: "We do need more help."

More than 20 highway ramps and roads were shut down throughout the day, Ottawa police said, following a week of blocked streets and racial taunts from aggressive protest participants.

In Toronto, several hundred protesters gathered on the south side of the Ontario legislature, chanting "liberté" overtop reggae that issued from loudspeakers and sporting placards that read, “Freedom = no mandates” and “let love guide you, not fear."

Nearby, a couple hundred health-care workers and supporters marched from the University of Toronto to hospital row just south of the legislature. Their inked messages included, “free-dumb” and “N95 masks for all.”

"But we do it for the greater good, we do it for the people we've lost, and we do it for our stretched-thin health-care system, which we rely on,” she said. “I think it's really important to be here and speak up against the misinformation and the hate."

Bill Fehr, a meat-processing plant owner at the legislature to protest pandemic measures, tapped into a strain of national pride while arguing that government rules encroach on the rights of unvaccinated workers.

“Those are a lot of people, patriots that have lost their jobs because they stood their ground. And that is unacceptable in this time and age. We, the common people, will prevail," he told the Queen's Park crowd through a microphone.

"Enough of the lockdowns. Enough of the mandates. Enough of running our lives for the last two years,” said Leszek Lasinski in an interview, claiming vaccination has “got us nowhere.”

Police forces in those cities say they have learned lessons from Ottawa's predicament and developed strategies designed to protect key infrastructure, such as vital traffic corridors and hospitals, and also prevent possible violence.

Those tactics have involved significantly boosting the presence of police officers at protest sites, blocking off key access routes and stepping up enforcement of traffic regulations and bylaws on excessive noise and other issues.

In downtown Vancouver horns were blaring all afternoon as vehicles adorned with Canada flags littered the streets. Police tried to maintain order as ambulances fought the crowd from their station along Burrard Street, and tempers raged as counter-protesters held up signs in support of vaccines and called for silence outside St. Paul's hospital.

Back in Ottawa, Sloly said 250 RCMP officers would be deployed to the city, up sharply from the 60 that were previously expected.

Police in Winnipeg, meanwhile, laid charges against a 42-year-old Manitoba man who allegedly drove his vehicle into the group of "freedom convoy" protesters gathered in that city on Friday night.

The incident resulted in three men being treated at the scene for minor injuries, while a fourth man was taken to hospital and released. The accused is facing multiple charges including assault with a weapon and dangerous operation of a conveyance.

NDP Leader Jagmeet Singh said protesters who have dug in for the long haul in downtown Ottawa and elsewhere are symbols of deep anger simmering through the country.

At a news conference, he called the trucker convoys “completely misdirected” in their actions, but noted that many people nationwide are feeling angry, worried and unsure of how the country will get out of the COVID-19 pandemic.

This report by The Canadian Press was first published Feb. 5, 2022.

— With files from Liam Casey in Toronto, Kevin Bissett in Fredericton, Brittany Hobson in Winnipeg, Rob Drinkwater in Edmonton and Brieanna Charlebois in Vancouver.

No quick end in sight for the Coutts, Alta., trucker border blockade: RCMP